Have your Kleenex handy 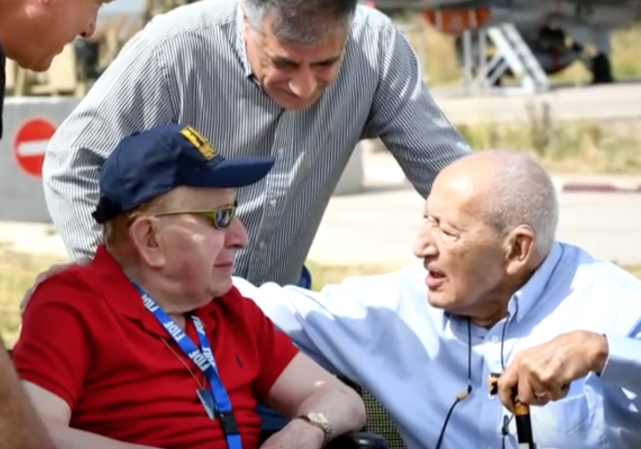 Here’s a heartwarming story, courtesy of The Greatest Generation.

Sid Shafner, 94, is back in the U.S. after a stirring eight-day trip to Israel and Poland last week. He was honored at a Holocaust remembrance ceremony for his hand, as a young troop, in helping to liberate some 30,000 prisoners from the Dachau Concentration Camp in southern Germany in 1945.

“Sid tells the story that his convoy was stopped by a Jew named Marcel,” Peter Weintraub, president of Friends of the Israel Defense Forces, who sponsored the trip, told ABC News. “Marcel tells him in Yiddish that ‘You have to leave your route and divert to help us,’ which he did.”

Shafner and Levy established an instant bond and became good friends, Weintraub said. They were reunited for the first time in two decades earlier this month.

A video of their face-to-face reunion on May 10 at an Israeli military base shows the moment when the two came together. In the video, Shafner and Levy embrace each other with hugs, kisses and tears, as family and friends look on.

“Everything I have today, all of my children, grandchildren and great grandchildren, is due to you, Sid,” Levy told Shafner, according to Weintraub.

“Sid is crying tears of joy,” Weintraub added. “We have done this trip several times but never have we reunited survivors and liberators.”

The trip was sponsored by Friends of the IDF as part of its “From Holocaust to Independence” delegation to Poland and Israel.

Shafner is the last remaining member of his unit. “What I regret is, I, I shouldn’t be the only one celebrating and taking this trip. These fellows should be with me, but they’re not,” he told CBS news. “You’ll always be one of us,” Shafner said to Levy, “most of the boys are not here anymore unfortunately, but he’s still one of us.”

“Everything I have today is because of you,” said Levy.

Next time this happens, you all need to pick up your own gun and take care of business.

America has apparently gotten out of the liberation and freedom business.

Israel seems to be the only ones who have learned this lesson.

Sorry – lack of empathy for holocaust survivors is the most politically incorrect thing on the planet, as it should be.

Know that my lack of empathy isn’t for those who suffered nor died or any of that. There is no diminishing the monstrosity of these events.

When someone says the mean to wipe you off the planet, you do not turn the other cheek or dismiss them as a raving lunatic or a “mad barking dog” as one survivor of the Warsaw Ghetto uprising described Hitler. The Germans made no secret of their intent. After thousands of years of persecution the Jewish response to German anti Semitism still baffles me.

When someone says they intend to kill you, you explain to the world later apologetically that words carry meaning and can have consequences. You do this as you stand over the grave of the people who said it.

My lack of empathy comes for a place that we have not learned this lesson today as the middle east shouts exactly these words in our direction.

Israel gets it. The rest of us appear to be slow learners.

Andy ;
You’re making a common mistake of today. You’re being too intellectual & shorting your humanity.
You have no idea.

Also with regard to being in touch with my humanity.

One of the most powerful chapters from “Isaac’s Army: A Story of Courage and Survival in Nazi-Occupied Poland” was near the end when the author quoted one of the resistance characters describing bravery and courage in comparison to those who got gassed.

A man was waiting in a line for what he knew was the gas chambers with his young kid on his shoulders. The kid was asking when will they get to where they were going. The character watched as the man told his kid “Don’t worry, it will all be over soon” as he tried his best to shield his kid from the horror of what was to come.

So my humanity exists in my very first comment- before this starts happening again, pick up a gun and make the people saying those things be dead. There’s no intellectual argument about that…it’s 100% lizard brain survival.

Evil understands no other response.