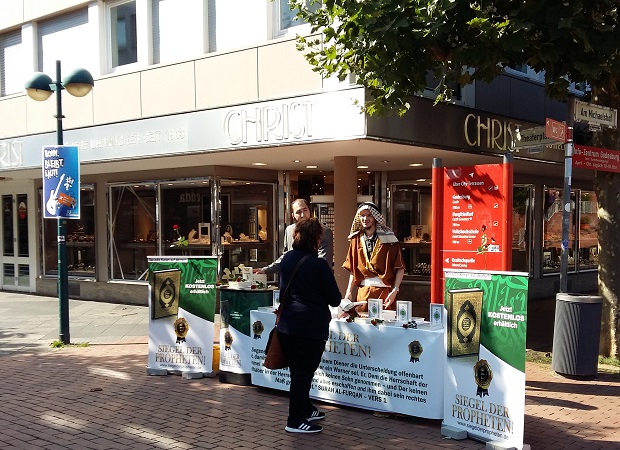 A leading German Islamist Sven Lau is standing trial for creating ‘Sharia Police’. In 2014, a group of young Muslim men under Lau’s commend took to the streets of Wuppertal enforcing Islamic law. The Higher District Court in Düsseldorf will hear the case against 36 year-old German convert Lau, who goes by is Muslim name of Abu Adam, for supporting a terrorist organisation.

The group led by Lau is one of the many Islamist outfits presently active across Germany. Some 700 Germans have reportedly joined the ranks of Islamic State in Syria and Iraq, including 29 former German army soldiers. The District Court in Wuppertal is also putting Lau and seven of his Sharia enforcers to trial for patrolling the city wearing unauthorised uniforms. If convicted, the Islamists could face fines or a prison sentence up to 2 years.

It is doubtful if a proverbial slap on the wrist is going to prompt hardened Islamists of the Sharia Police to mend their ways.

The law is catching up with Sven Lau. He is about to be brought before the court for supporting a terrorist organisation. The ‘Sharia Police’ created by him one and half year ago in Wuppertal will also have [legal] consequences. In December 2015, the District Court of Wuppertal had refused to start criminal proceedings. Following an appeal by the public prosecutor, the 3rd Criminal Division of the Higher District Court in Düsseldorf has permitted indictment against 8 accused.

The Lau and his men are being charged with the violation of the Law Forbidding [unauthorised] Uniforms. Six Islamists allegedly wore orange colour vests with ‘Sharia Police’ printed on them as the patrolled around Wuppertal on September 3, 2014. According to the preliminary assessment of the [Criminal] Division, the accused had made their intent to enforce their will clear by adding “Police” [on their vests]. Sven Lau is believed to have said many times while he was on the patrol that “the laws of Allah will be enforced.” [Author’s translation]

Sven Lau and his enforcers distributed flyers proclaiming “Sharia Controlled-Zone” in the city of Wuppertal — forbidding alcohol, pornography, gambling and music. Besides working to create a Mafia-style Sharia Zone, Lau also travelled to Islamic State in Syria and Iraq. Lau was arrested by German police in December 2015 for his closed ties with the Islamic State. According to Germany authorities, the charity run by him was working as a front for Islamic State and aiding ISIS-combatants with military equipment.

The rise of Islamism in Germany is further compounded by the arrival of more than a million migrants in span of less than a year, most of them Arab and Muslim men. Many of these new migrants come from Syria and Afghanistan, both countries that have a large segment of the population under the control and influenced by Islamic State and Taliban respectively.

In the war against Islamist terrorism, Europe stands unprepared. Despite terrorist attacks in major European cities, politicians and media remain reluctant to acknowledge the rising tide of Political and militant Islam — let alone confront it.

Author is Analyst based near Cologne, Germany

no charges stemming from the indimidation they would have had to use to enforce their will? No incidencts of assault that could be pressed? Because they were dressed wrong strikes me as the weakest reason to prosecute, or was that the only charge they can get to stick (say. due to lack of cooperative witnesses)?

How much longer will it take for the world to see islam for what it is? I do not believe that a horrible plague could kill or intimidate as many people as this monstrous cult has. Can any of you please explain why the world protects and coddles them?

The Second Amendment to the Constitution seems very prescient now. It is amazing how polite people can be when dealing with a stranger that may be armed.

“An armed society is a polite society.”
Robert Heinlein

Also, from the same book:

“The police of a state should never be stronger or better armed than the citizenry. An armed citizenry, willing to fight, is the foundation of civil freedom.”
Robert Anson Heinlein

islam has a skewed view of morality when rape and beheadings are ok.

Hell, we in the U.S. already have our own form of sharia police masquerading as college students and professors.

They just don’t have the orange vests.

Mike, I would like very much to tell you how wrong you are … but I can’t. Between the fascist student opposed to free speech and the faculty Marxists [Clickists?] you are dead on. 🙁