Germany: Clash Between “Merkel Must Go” and “Nazis Out” Protesters

Germany: Clash Between “Merkel Must Go” and “Nazis Out” Protesters 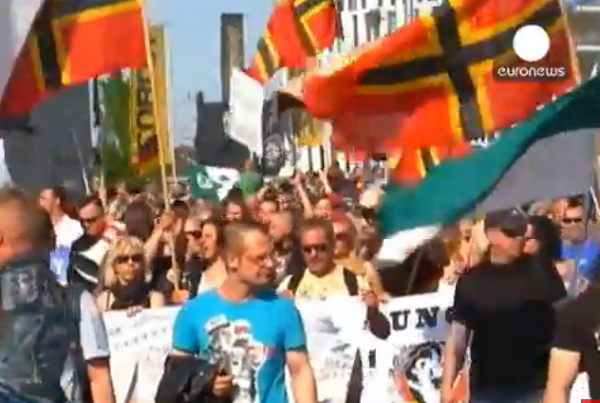 There have been a number of anti-refugee protests in Germany over the past several months as Germans express their dissatisfaction with Angela Merkel’s disastrous “open door” policy for refugees flooding into Germany.

This weekend, there was a clash between “Merkel Must Go” protesters and pro-migrant “Nazis Out” protesters.

Yesterday on Saturday 06/05/16 several demonstrations in #Berlin … the slogan: "Merkel must go" https://t.co/LRKDuUjKyw via @OnlineMagazin

About 1,000 right-wing extremists and others protesting Chancellor Angela Merkel’s refugee policies squared off with about 4,500 counter-demonstrators outside the Berlin chancellery on Saturday, as Italian police and demonstrators clashed during a protest against a planned Austria fence.

In Berlin, protesters from the far-Right cheered and jeered as counter-demonstrators who tried to break through the police cordon were quickly overwhelmed and dragged away by officers.

Occasional bottles and even a beer stein flew from the counter -demonstration but fell far short of the far-right march about 150 metres away, amid chants of “Nazis out.”

On the other side, the right-wing demonstrators held signs with slogans like “No Islam on German Soil” and chanted “Merkel must go” while waving German flags.

Meanwhile in Italy there was a protest of Austria’s proposed border fence.

[A] demonstration against a planned fence to stop refugees crossing the Brenner Pass between Italy and Austria turned violent on Saturday, with Italian police firing teargas at hundreds of protesters throwing stones and firecrackers.

Austria has said it plans to erect a fence at the Alpine crossing it shares with Italy to “channel” people. Part of Europe’s borderless Schengen zone, Brenner is one of the routes that migrants use as they head towards northern Europe.

Two police officers were injured in the clashes, the head of a local Italian police union, Fulvio Coslovi, told Reuters new agency. He said around 10 demonstrators were being held by police.

Local police in Tyrol, Austria said over 600 protesters showed up to the third violent demonstration at the Brenner Pass in just over a month, meeting at the Brenner station in Italy.

Italy and Germany are utterly opposed to Austria’s plan to build a fence at its border with Italy, Italian Prime Minister Matteo Renzi said on Thursday after talks with German Chancellor Angela Merkel.

Jean-Claude Juncker, European Commission president, said on Saturday that Austria imposing controls on its border with Italy would be a “political catastrophe” for Europe.

I wonder how many of the “Nazis must go” and anti-fence demonstrators were actual Europeans of any sort?

The pro-choicers have a “final solution” problem, and the native people are standing their ground against human rights violations committed during abortion rites, planned parenthood, and social justice-inspired global humanitarian disasters.

said on Saturday that Austria imposing controls on its border with Italy would be a “political catastrophe” for Europe.

I’m sure he’s right. The political fiction of a monolithic Europe was always a house of cards built on quicksand. It should’t take much rattling to bring it down.

On the other hand, I’m sure “controls” will do Austria a world of good. Especially if they’re indistinguishable from a wall.

Obviously, they need to bring back communists in order to make the whole place suck bad enough to keep out the not-nice people again. /snark (Yeah, I know it’s not that simple. There were a lot of not-nice people in communist Germany back then too, mostly communists.)

Don’t you just love how people who want to protect their country from invasion are “right-wing extremists”.

So, people who wish to protect their heritage and sovereignty are “right-wing extremists”?

My God, the entire world has gone mad.