“The company did nothing wrong” 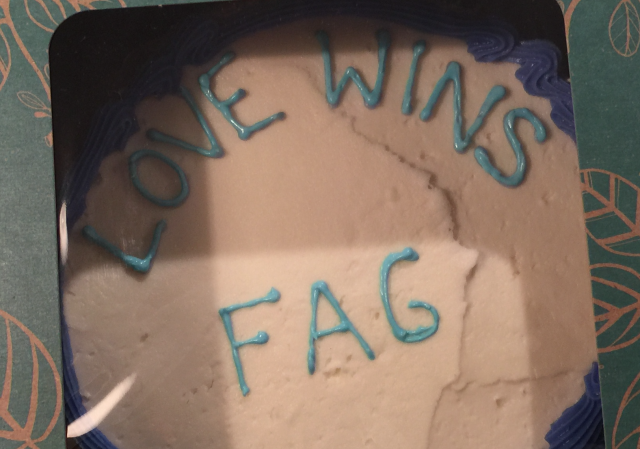 Last month, an Austin-based openly gay pastor accused Whole Foods of icing a gay slur on a cake he ordered from the local grocer. And so Pastor Jordan Brown filed suit.

I called BS and so did Whole Foods who immediately filed a counter-suit against both the plaintiff and his attorney for fraud.

Monday, Brown apologized to Whole Foods and his attorney for his allegations:

Today I am dismissing my lawsuit against Whole Foods Market. The company did nothing wrong. I was wrong to pursue this matter and use the media to perpetuate this story. I want to apologize to Whole Foods and its team members for questioning the company’s commitment to its values, and especially the bakery associate who I understand was put in a terrible position because of my actions. I apologize to the LGBT community for diverting attention from real issues. I also want to apologize to my partner, my family, my church family, and my attorney.

Whole Foods, too released a statement:

We’re very pleased that the truth has come to light. Given Mr. Brown’s apology and public admission that his story was a complete fabrication, we see no reason to move forward with our counter suit to defend the integrity of our brand and team members.

Brown originally alleged he ordered a cake from Whole Foods that said “Love Wins” and did not realize until he purchased the cake and returned to his vehicle that the written in blue icing were the words “Love Wins Fag”.

Well that kind of puts the icing on the cake, so to speak.

Somehow I think an apology would not have been sufficient if the shoe were on the other foot.

“Don’t let the truth get in the way of a good victim narrative”, as the liberals always say.

“I also want to apologize to my … my attorney.”

For putting him in the position of committing an ethical violation that could result in disbarment.

The rev needs to spend a little time in the state bakery in Huntsville.

They should continue with their counter suit to make an example of this man and to also serve notice to anyone else who would try to defraud them in this manner!

To e this feels like they are letting the guy off!

I’m constantly amazed that frivolous and fraudulent claims aren’t met more often with counter-suits. Even when someone has to kill a thug to protect his own life, and is subsequently sued by the thug’s family, why aren’t there counter-suits for psychological trauma (of having to take a human being’s life), cost to reputation (when tried in a high-profile criminal case for any charge related to the event), cost of counseling, the assault that prompted the use of lethal defensive force, etc.?

Agreed. Even if Whole Foods doesn’t collect one thin dime from this person, continuing with a lawsuit until judgement (and I feel Whole Foods should NOT have dropped it) will dissuade other hoaxsters from trying a similar tactic.
It works both ways: Here is an old (from 2008) response to a tenuous IP lawsuit Monster Cable tried to pursue against a small-business. I highly recommend reading Blue Jeans Cable’s response in its entirety:
http://www.bluejeanscable.com/legal/mcp/

The reason they don’t pursue suits is that generally the people filing the suits don’t have any money to take, so corporations waste a lot of time and money getting a judgement that will never be paid.

In my opinion, this POS should be convicted of fraud and put in jail. But he won’t. And because he has nothing of value, it’s simply not worth Whole Foods’ time or effort to pursue a suit against him, because their time is infinitely more valuable than his.

Valerie. I wondered about that. Plus the fees. But, should the local bar treat this attorney as they should treat prosecutors who withhold exculpatory evidence, his defense will have to be this clown explaining how he lied and lied and lied and never, by intonation or ambiguity, led the attorney to think Whole Foods might be the victim here.

Calling someone who is openly gay a pastor is like calling Bruce Jenner a woman. Quit with the NewSpeak!

It’s OK. He “self-identifies” as a pastor, so that makes it just peachy.

As has been previously noted, over 90% of so-called hate crimes where the “victim” is the only witness turn out to be hoaxes. On college campuses, the rate is close to 100%.

This underlines that the purpose behind hate crime laws is not to seek justice, but revenge upon perceived opponents.

Love wins if you let it. Self-hatred never does.

And self-hatred projected onto others never wins.
Imagine if this “pastor” stopped his gay-ness. He wouldn’t loathe himself and project his anger onto others.

Society and culture cannot fix a person’s self-hatred. And homosexuals have tons of self-hatred that through personal therapy and the LGBT community is projected onto society and especially Christians. The guilt is overwhelming for them and they want relief.

But society and culture cannot mitigate their pain. Stopping one’s homosexuality can stop one’s guilt, shame and the neurosis.

I’ve known those who have stopped their homosexuality. One is a rector who left the life style and later became an Anglican priest, got married and now has five kids.

And I’ve said this before. Wherever the LGBT community is you will find rising anti-Semitism.

If you’re falsely accusing someone or some company of a hate
crime, you should be prosecuted under hate crime laws whether a company wants anything to do with it or not. I get Wholefoods wanting to be out of the limelight on this issue, but I don’t get law enforcement giving it a no harm/no foul pass on the bullshit charge – by a dang Pastor no less.

They should sue him anyway. Falsely accusing someone of hate is about the worst thing you can do.