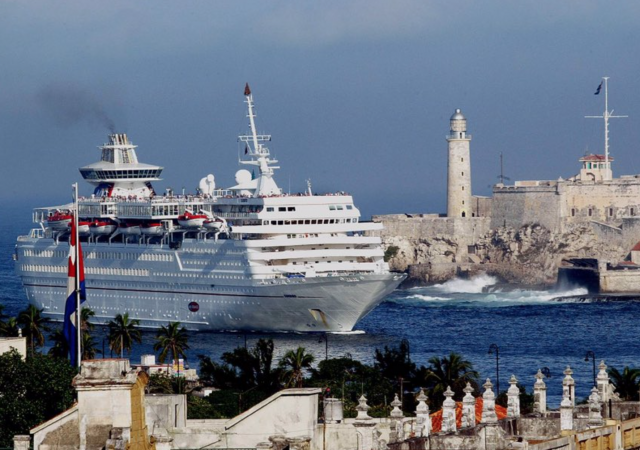 Cuba has received their first U.S. cruise ship in the last 38 years as the two countries relax their tense relationship.

Carnival’s Adonia landed at Havana Bay with 700 passengers at 9:30AM Eastern time. It will also make stops at Cienfuegos and Santiago de Cuba.

The ship included Cuban passengers who escaped the Communist regime under Fidel Castro.

“I’m just thinking of that day when we left (Cuba) and shaking like a leaf,” said passenger Ana Garcia.

She left the island 48 years ago.

“I’m blessed to be here today and hoping for a better tomorrow for Cuba and my Cuban brothers and sisters,” she continued.

Passengers set sail Sunday on the first cruise to depart Miami for communist Cuba since 1959 https://t.co/XrDUJtvdhyhttps://t.co/uzOiH3B2lx

However, Cuban passengers almost forced Carnival to cancel the cruise. The regime implemented a law that did not allow Cuban nationals to return to the island by sea. Therefore, at first, Carnival did not want to sell tickets to Cuban nationals. The company received massive backlash, including two lawsuits.

Carnival changed its mind and told passengers they “would delay the Adonia’s first trip, if necessary, until Cuba changed its policy.” The Communist Party newspaper Granma announced that the regime will not apply the law to those who arrive on cruise liners.

It's the first U.S. cruise ship to arrive in Cuba in decades: https://t.co/tj6ytO6T2P pic.twitter.com/XBtxBVQFz8

“Regularly scheduled cruises are the third leg of the land, sea and air efforts by the Obama Administration to cement its policy changes, the goal is to make the initiatives big and loud so that they are harder to dislodge,” explained John Kavulich, president of the US-Cuba Trade and Economic Council.

The first US cruise ship to travel to Cuba in half a century docked in Havana on Monday pic.twitter.com/fOM86cdCtZ

Carnival will sail the Adonia “every other week from Miami to Cuba.”

But while people think this will help the Cuban people under the horrific regime, the statistics show it will only benefit the Castros. Kavulich admitted “that the cruise companies pay the government $500,00 per cruise, while passengers spend about $100 person in each city they visit.”

First one off the ship was Ricky No Recuerdo.

Well, somebody seems to realize that America will need leadership similarly big and loud to reverse Obama’s disgraceful legacy of chronic capitulation to enemies large and small.

I guess they’re just waiting for “relations” between the two countries to become so cemented in place before they let it slip that JFK was killed by the Castro brothers as a payback for the CIA’s assassination attempts on Fidel.

Let the Americans visit. Let them see the Communist idea of paradise.

Sooner or later some rube is going to say, “Hey, this is a third-world hell-hole!”

After completing a major refit in March and April 2016, Adonia has been reassigned within the Carnival Corporation, and became the first ship for a new brand called “fathom”, focusing on the growing number of people who want to work alongside local communities as part of their travel experience in areas such as education, the environment and economic development. She will be sailing out of Miami to the Dominican Republic and Cuba on a weekly basis where passengers will be working on programs that make a positive social impact on the communities they visit.

So this is not a typical Carnival Cruis ship. This is part of a new something cruise line called Fathom.

Anyone have any bets on how often stowaways are going to get caught on the cruise ship leaving Cuba?

My guess is at least 10 per cruise-liner will attempt it. I hope that Carnival has a good screening system, otherwise they’re going to end up “passenger heavy” with every cruise.

Canadian cruise ships have been visiting Cuba for decades.. Hundreds of them yearly. Last year close to 800,000 passengers sailed from Canada to Cuba and back. Of those, an estimated 60,000 were Americans who circumvented the US ban that way – many of them Cuban Americans visiting family and friends.

Cuba is the fourth or fifth most popular tourism destination for Canadians – and continues to produce high degrees of applause from the tourists who have been there. No one’s worried about stowaways, least of all Cuba. An added incentive for Canadians is the knowledge that their health care coverage is recognized by the Cuban health care system, a reciprocal arrangement for Cubans who visit Canada.

A relative of mine who is pretty far left on a lot of issues just visited Cuba this past month.

It pained him to say it, but the best he could say about the trip was it that was “er uh interesting…”

What will be the US/obama response when the open and free nation of Cuba decides to “Restrain” some old Cubans that arrive by ship? Will this cause an international incident or just a tut-tut from the unicorn? This is the same regime that stood thousands up against walls and shot them just because the government didn’t agree politically with them.

Don’t be ridiculous – Obama hasn’t lined up any political dissidents and shot them yet…oh wait, you weren’t referring to his regime… 😉