. . . past the blend wall deemed safe for car engines 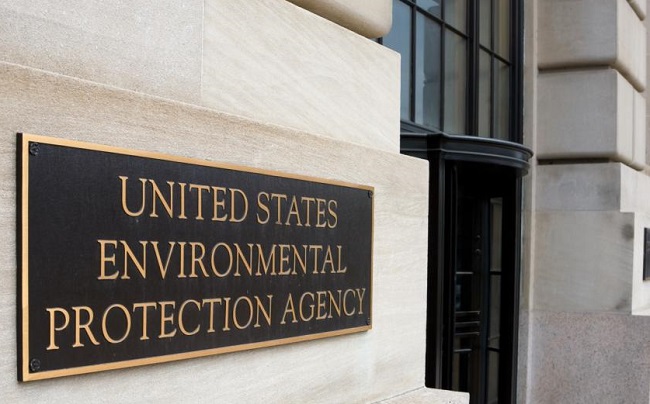 Although very few states still—or ever did—mandate ethanol in gasoline, ethanol-blended gas is widely available; indeed, it can be difficult to find an ethanol-free gas station (if you want to find one near you, try this resource).

The blend wall—the percentage of ethanol to gas considered safe for car engines—is 10% or E-10, and past efforts to create and push E-15 have failed.  The little-known practice of automakers quietly voiding warranties on cars whose owners use E-15 gasoline illustrates the industry’s understanding of the harm that levels of ethanol passing the blend wall (E-10) causes to car engines.  Triple A also warned against the use of E-15 gas in pre-2012 cars.  Not only are engines—cars, boats, lawn mowers, chain saws, etc.— harmed, but ethanol blended into gasoline, not just the higher E-15 blend but even that at the blend wall, also contributes to a loss of mileage.

The percentage of ethanol to gas has been increasing relatively steadily over the past decade as indicated by this graph from Bloomberg: 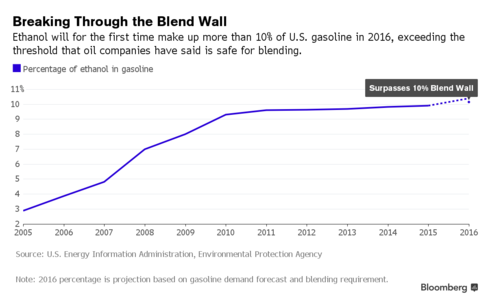 The EPA is now moving to raise the level of ethanol blended into the majority of the nation’s gasoline past the “safe” E-10 blend wall.

Mixing an additional 700 million gallons of ethanol and other biofuels into the nation’s fuel supply to meet a goal of 18.8 billion gallons in 2017 will raise the biofuel percentage to 10.44 percent, or past the “blend wall” after which car engines can be damaged, said Heartland Institute research fellow Isaac Orr.

The Renewable Fuel Standard has been a bone of contention on both the left and the right . . . for (mostly) different reasons.

Janet McCabe, acting assistant administrator for the EPA’s Office of Air and Radiation, called the 2005 Renewable Fuel Standard “a success story that has driven biofuel production and use in the U.S. to levels higher than any other nation.”

“This administration is committed to keeping the RFS program on track, spurring continued growth in biofuel production and use, and achieving the climate and energy independence benefits that Congress envisioned from this program,” she said in a Wednesday statement.

Ethanol is popular with lawmakers in farming states like Iowa, but the mandate faces increasing opposition from others, including some environmentalists, who object to clearing more land for farming in order to grow the corn-based fuel.

Free-market champions say the standard no longer makes sense because oil and natural gas have become so plentiful thanks to advances in extraction technology, starting with hydraulic fracturing. The ethanol mandate also raises the cost of fuel.

At the time, Congress was attempting to reduce emissions as well as U.S. dependence on foreign oil. Since then, the United States has become the world’s largest producer of natural gas and doubled its oil production, sending prices plummeting.

Jazz Shaw over at Hot Air sums up this new EPA push for ethanol blends that surpass the blend wall well:

The EPA’s ethanol mandate is bad news all the way around and it’s less sensible than ever now that America is a global leader in energy production. At this point it’s simply a relic of politics designed to keep a small but influential special interest group happy. Unfortunately, you’re the ones paying the price for it and that’s not going to change as long as the Democrats are in control of the White House and appointing the folks working at the Environmental Protection Agency.

I would add only that GOP complicity in the RFS and ethanol mandate is also a problem, as we saw during this year’s contentious Iowa GOP caucuses.  Happily, Florida finally repealed its ethanol mandate in 2013, and I have been happily voting with my feet, or in this case my gas tank, ever since.

[Featured image via the Fiscal Times]

Ethanol is the very expression of the anti-science, anti-market, anti-people monster that is the current EPA.

It SHOULD be one of the first…if not THE first…monsters killed by a reform movement. It won’t be, I am very sad to believe.

In the words of the great Winston Churchill: “Well, its the most absolutely f#@*ing thing in the whole of my bloody life.”

Mandating of ethanol is a perfect example of how difficult it is to alter the path of a heavily lobbied activity. It defies logic AND science, yet the political class says “MORE!” Every gallon we are forced to buy puts a lot of money into pockets that aren’t growers or refiners. People are getting rich in DC and in corn country off of this.

The experienced, professional mechanics who service my vehicle tell me the fuel tank sensor system in GM cars are being destroyed by the ethanol-based fuel pumped into the tank. I looked at what was left of mine and agree.

I have an idea, perhaps we should start recycling EPA employees? *wink*
Hubby and I are motorcyclists. Our two wheels don’t do well on corn fuel and neither does our mower, trimmer, etc. Thankfully, there several local ethanol-free gas stations. Just shrug folks. Aside from full scale war, it’s our only defense at the moment since the congress created entity isn’t going away any time soon.

How about a class-action suit from all the people who have been in motorcycle accidents?

Maybe I’m just too cynical, but it seems to me this is a rather cozy convenience for automakers, who can’t sell more cars if people are hanging on to them longer and longer. Having people use engine-destroying fuel sounds like a pretty good way to get them to buy cars every two or three years like they used to in days gone by ~

My Representative, Lamar Smith, chairs the House committee that provides the EPA with the laws and money to do this crap. He holds hearings, issues whining press releases, and then it is business as usual. Unfortunately, he won the primary so I have to vote for this GOPe POS or get somebody even worse. I am hopeful that Donald can shut this agency down as it is clear the GOPe will not.

You can hope in one hand and put Donald’s empty promises that amount to you-know-what in the other and see which one fills up first.

When I hear some talking about Trump being some savior who will fix everything, I recall comments on other sites when the “24” television series first came on. “Jack Bauer would do this.” “Jack Bauer would never allow that!”

So many fans of Trump believe him to be some magic person who, upon swearing in, will fix everything, when, in fact, he will not do a damned thing. His image is every bit as fictional as was the character Jack Bauer.

This is precisely correct. Another interesting feature is that they cannot believe that anyone has real reasons for opposing Trump. They must have been bribed, or upset of their candidate, or disloyal to the US.

I’m constantly appalled by the refusal to deal with reality among T-rump supporters.

Der Donald not only came out in favor of EXPANDING the ethanol mandates, but in EXTENDING them as well in a bid for crony support in Iowa.

THEN he lied about his reasons, saying it would “make America great again”. More patent bullshit was never uttered.

And people insist on ignoring all that in favor of some fantasy they indulge.

Donald Trump endorsed ethanol while pandering in Iowa. Wonder what his position is this week.

Just to be clear, I choose my words carefully. I HOPE to win the lottery. I do not believe I will (I understand the math). I also HOPE Donald will do something with the EPA. I really do not know what he will actually do about anything including the EPA. Hope is not belief or an expectation.

I wasn’t dinging you personally. It was a more general comment in the context of the others above it.

You can be hopeful. I even wish I could. I think I know how this man will conduct himself in office, the same as I could predict what Obama would be like.

Seems to me that the EPA has been huffing too many fumes.

I have used ethanol-free gasoline and the result was better engine performance (acceleration). I did not calculate any gas mileage difference though. The price premium is about 30 cents per gallon more than unleaded premium, which I usually use. I would fill my car’s tank more often with ethanol-free, but the closest gas station offering this product is too out-of-the-way.

I would buy ethanol free more often, but it’s nearly $1 more per gallon.

Cars are important. Let’s look at the other end: the soil damage, environment damage from crop chemicals, increased cost of food. Point at that and ethanol is a humanitarian disaster.

If we must subsidize corn, why not send it to Venezuela?

Using energy to turn food into energy is a losing proposition, except for the corn growers and lobby, for whom it is magical.

“Putting food in your gas tank is a very bad idea.”

Oh dang! There goes my engine. I wonder caused the issue?

Oklahoma requires labeling of gas pumps so it is easy to locate the 100% gas. In fact, there is one station chain (On-Cue Express) which has pumps for everything – 100% in three grades, E10, E85, diesel and CNG. Love’s Stores also carries 100% as well as CNG. And there are more stations converting to 100% gas. But, it is Oklahoma and we are sitting on a small amount of the stuff.

Last year, while traveling, I discovered that some stations had 100% in the premium grade. Those stations were by recreational lakes so at least they were helping out the boaters.

I suspect that damage to cars is a desired side effect of the mandate. The EPA is full of people that think your cars (but not theirs, they’re doing holy work) are evil.