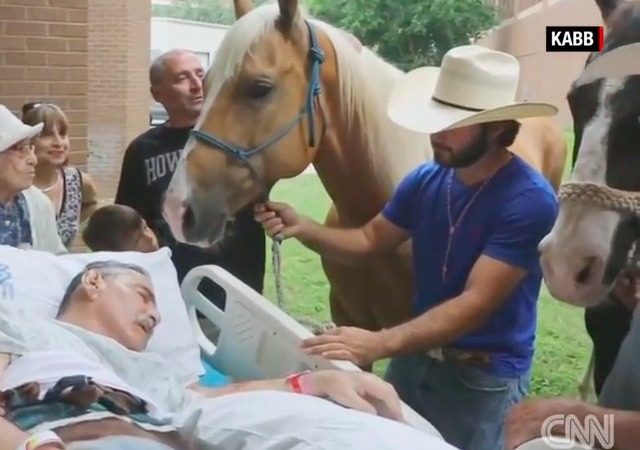 Vietnam veteran Roberto Gonzales does not have much time left, but he wanted to spend a few moments with his horses Ringo and Sugar.

His wife Rosario described the reunion:

The final meeting took place on May 21, exactly 46 years after he was injured in Vietnam.

A gunshot in Vietnam paralyzed Gonzales, but he did not allow that to stop him from working with horses. Rosaria said he “is one of the only disabled “registered horse trainers in Texas.”

A back wound brought Gonzales to the hospital where he discovered “liver issues and that his kidneys were starting to shut down.”

Medical officials wheeled him out to say goodbye to his beloved horses while surrounded by his family.

Rosario explained that the animals “are his life” and the couple has raised them “for 30, 40 years.”

I’m reading the Longmire books right now and in a couple places horses are pictured as inhaling a man’s breath as a way to “bond”. It sure looks like that’s what Sugar was doing there.

I mourn the loss of a fellow veteran. I am proud for him making a productive life for himself in spite of his misfortune in war.

animals know stuff we can’t (yet) explain. And we’re animals, too. There’s a lot yet to learn.

This is my all-time favorite therapy horse video.

My father was a Hollywood stunt man. He partially made a living riding and falling off of horses. He would tell you they are mean and stupid.

OTOH, they are also individuals. Some are as bright and good as a good dog.

I wish more people had our outlook on this.

Leave it to a veteran to not be discouraged by his disability and to live a full life. Contrast Roberto Gonzales with the overwhelming majority of college kids who elevate the most trivial problems as if the same.

“There is something about the outside of a horse that is good for the inside of a man.”

In the 1980’s, the leader of the free world privately cried like a baby when his horse died.