Russia’s desire to be the best keeps getting the best of them in the wrong way. 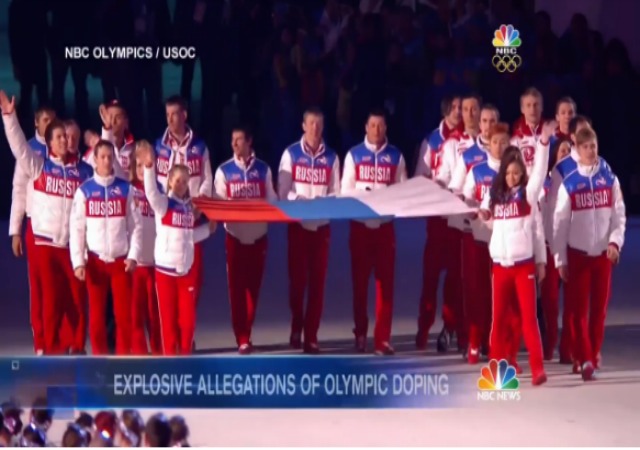 The Department of Justice has decided to investigate the massive Russia doping scandal. U.S. courts ruled that prosecutors may charge foreigners abroad if they have connections to the U.S.

The New York Times reported that the U.S. attorney’s office for the Eastern District of New York. The officials have targeted “Russian government officials, athletes, coaches, antidoping authorities and anyone who might have benefited unfairly from a doping regime, according to the people, who did not have authorization to speak about the inquiry publicly.” Possible charges include conspiracy and fraud.

The Times did not elaborate on which connections qualify. They only mentioned “the connection can be limited, such as the use of an American bank.”

The charges stem from a World Anti-Doping Agency (WADA) report in November that said Russian athletes received performance enhancing drugs directly from the state. The agency found someone “intentionally and maliciously” destroyed over 1,400 samples in Moscow. Russia won 24 gold medals in the 2012 London Olympics, but the evidence shows the country should not have allowed most of those athletes to perform.

WADA recommended the Olympics ban the Russian Federation from the 2016 Olympics in Brazil.

Russia fought the allegations, but eventually relented and accepted the full suspension from the International Association of Athletics Federations:

“The IAAF council was today informed that written confirmation had been received yesterday from Araf [Russian Federation] accepting their full suspension without requesting a hearing as was their constitutional right.

“Araf confirmed they understood that the council would only accept their reinstatement as an IAAF member following the recommendation of the IAAF inspection team who will decide if the verification criteria have been fulfilled. Araf confirmed they will cooperate fully and actively with the team.”

WADA identified Grigory Rodchenkov, “the longtime head of Russia’s antidoping laboratory,” as the man in charge of the doping. Rodchenkov and the Russian Ministry of Sport admitted doping problems existed.

. @nytimes and @RebeccaRuiz please see comments from the Russian Ministry of Sport pic.twitter.com/k7E7unW3f7

The U.S. officials have opened an investigation against him.

Russian Sports Minister Vitaly Mutko also acknowledged “serious mistakes,” but did not provide clear details if the doping occurred at the state level.

The Eastern District also has an investigation into the FIFA corruption case, which also names Mutko:

While the Eastern District’s FIFA investigation and Russian doping investigation are independent inquiries, there is an overlap between the two matters. Prosecutors from the business and securities fraud section and the organized crime division are involved in both, and certain public figures have overlapping ties to Russian sports and global soccer.

Mr. Mutko, Russia’s minister of sport, is a member of FIFA’s ruling council, a position he has held since 2009. He was appointed to his current role in Russian government by President Vladimir V. Putin in 2008.

In his account to The Times, Dr. Rodchenkov, who oversaw Russia’s antidoping lab in Moscow for a decade, said he often took direct orders from Mr. Mutko’s deputy, Yuri Nagornykh, especially leading up to the Sochi Olympics in 2014. In Sochi, Dr. Rodchenkov said, he staged an elaborate dark-of-night operation to destroy Russian athletes’ tainted urine samples on orders from the government.

The International Olympic Committee (IOC) also “opened disciplinary proceedings against the 31 unidentified athletes from 12 countries who competed in Beijing.” They will “reanalyze drug tests from the 2014 Sochi Winter Games” due to the tampering allegations in the WADA report. They did not identify the athletes they caught from the 2008 Beijing Olympics.

I’m sure that Putin is shaking in his shoes and will direct all involved to cooperate to the fullest.

East Germany is rolling in its grave.

Their legendary women’s swim team included some of the toughest men in sports.

$10 says they get more cooperation out of the Russians than they get/got out of the Clintons.

What a farce….more feeble attempts at distraction.

This story has my crap detector buzzing, too. The U.S. attorney for the Eastern District of New York is not going to sue the Russian government without the approval of the White House. The Russian government has only given substantial resistance to the charges. Perhaps we are doing them a favor?

Sorry, in International sporting events, everyone cheats! The Russians cheating? Wow, give me some smelling salts now because I can’t make it to my fainting couch in time.

The Justice Department doesn’t have anything better to do with my tax money than to investigate the head of a foreign Anti-Doping agency that is in charge of doping his athletes. Why aren’t they investigating Lois Lerner or the copious union bosses in charge of the corrupt public sector unions or maybe they could investigate the multiple incompetent idiots who are ruining the health of our Veterans?

I can think of more but not just yet.

Although cheating at high level international sporting events is rampant, what sets apart Russia (not only them, I’m sure) is that cheating is a government policy, possibly going all the way to the top.
Furthermore, their government picks and chooses regime-friendly athletes to compete, and when those athletes retire, they, along with other celebrities, become figureheads in Putin’s United Russia party.
Soviet Olympic figure skater Irina Rodnina is now an *indispensable* Duma Member who a few years ago posted pictures of Obamas with bananas… For a more intimate connection see Putin’s love affair with the Olympic gymnast Alina Kabaeva.
That said, I agree with your main point that to have our Justice Department to investigate foreign doping scandals is a waste of taxpayer money.