“We want this coursework to be explicitly focused on systems of power and privilege.” 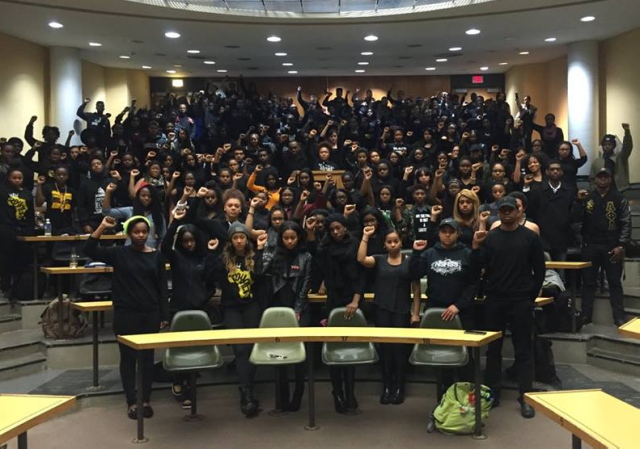 A decidedly progressive student group at Cornell University called Black Students United has sent a letter to school administrators saying they want the entire faculty to undergo training in diversity and a host of other garden variety issues in identity politics.

The Cornell Daily Sun has the story:

Black Students United will present a resolution prompting the Faculty Senate to examine how Cornell’s faculty members are educated in diversity issues at the Student Assembly’s meeting on Thursday.

The resolution originated from one of the demands BSU delivered to Cornell’s administration last semester regarding faculty training, according to a BSU facebook post.

“After conferring with the administration, we found that the best course of action would be submitting a resolution to the Student Assembly,” the group’s post stated, explaining that they chose to single out this demand and present it to the student body.

The letter detailing demands, issued by BSU to President Elizabeth Garrett and Ryan Lombardi, vice president for student and campus life, was delivered to the Office of the President at the end of a silent march to Day Hall on Nov. 17 and leaked onto a Cornell subreddit on Nov. 21, The Sun previously reported.

“We want all employees of the university, academic and otherwise — including tenured professors — to have appropriate, ongoing training that deals with issues of identity, such as race, class, religion, ability status, sexual and romantic orientation, gender and citizenship status,” the letter stated. “We want this coursework to be explicitly focused on systems of power and privilege in the United States and centering the voices of oppressed people.”

This part of the article is particularly telling:

While the University currently offers a lot of “compelling programming” addressing facets of diversity, the majority of them are optional, according to BSU co-chair Samari Gilbert ’17.

“The faculty that self select into those programs probably aren’t the ones that need to be educated about the topic,” Gilbert said. “We have extremely dedicated faculty and hopefully the resolution can push them to be even more effective inside and out of the classroom.”

Professor Jacobson, who teaches at Cornell, offered the following view of the faculty diversity training demand:

“I welcome a vigorous faculty senate and campus-wide examination of the lack of political diversity on campus, and ways in which we can expand understanding of the intellectual foundations of Western Civilization, constitutional liberty and free-market capitalism. But somehow I doubt that’s what they have in mind.”

BSU has a history of issuing demands. Below, you can read a seven page document they sent to Cornell’s late president Elizabeth Garrett last fall at the height of nationwide campus protests:

Featured image is a screen cap from BSU’s Facebook page.

I am fine with that as long as Black Students United also goes thru diversity training. They should be forced to examine why they treat blacks with conservative viewpoints like uncle Toms and discourage diverse viewpoints and voices.

I’d want to see what the “Re-Education Camps” look like before consenting to being sent there.

Some brave white student should apply to join and sue for discrimination on all levels.

Aside from the offices that issue the welfare checks, is there any part of Western civilization that the progressives/liberals are not trying to destroy?

I would say, “has not destroyed”. A true point ,but it is a bit late in the game to use the past tense.

First, I’m “white”, not “black”, so they have experiences that I don’t (and vice versa). But, I lived in Detroit for 12 years and know racism as well as any black person. And I can’t imagine living in a country where only 13% of the pop. has my skin color. But, WHY are they only 13%? About 20 million blacks have been “murdered” since Roe v. Wade, and millions more through street violence. What is wrong with THAT picture, dear friends of NAACP?

Oh, and get ready for the eventual lawsuit, professor, when, despite your tenure rights, they try to fire you for creating a “hostile environment” in class and in the “school community” for your refusal to participate in the diversity training.

In the alternative, you might expect consistent harassment tactics from BSU in disrupting you classes, and little support from the Cornell administration and the Faculty Senate (or whatever the collective group of professors is called at Cornell), and you might have to take them to court somehow to get them to enforce their own student behavior code. I’m sure the code will ban what BSU will do to you, and I’m fairly certain that no one will act to enforce it should they start up.

First thing I noticed is the Communist “raised fist” salute …

Oh, goody; more privileged ivy league racists who vomit out their vile racialism, being so blinded by their own racism, and too ignorant to comprehend what despicable segregationists they truly are.

You know, back when I walked the halls of my university, we used to get these cards annually to report to HEW (Health, Education and Welfare) to report our race/ethnicity for compliance purposes.
Now that we are allowed to “self-declare” our “identity,” aren’t these kinds of reports really meaningless ?

I submit the following photo:

So the new university model is the students determine the curriculum for the education of the faculty. I feel like I am missing something here…

If they don’t like the offerings at that college, why did they decide to apply and attend there? They don’t own the place.

Some white student should apply and sue them for discrimination.

I’m waiting for there to be a White Students United just so I can hear all the grinding and gnashing of teeth.

“We want this coursework to be explicitly focused on systems of power and privilege in the United States and centering the voices of oppressed people.”

Says the group wanting to be a system of power and privilege.

This is a bridge too far even for the most liberal campus. Compelling tenured faculty to do anything is basically impossible. It sets up as another of those two core constituencies in conflict problems: professors vs. SJW, like police unions vs SJW.

These students went to school to teach the teachers? And if so, why not demand they pay tuition for their instruction?

Why would you go to school if you’re convinced you already know more than the faculty?

“Get back to class. Otherwise, pack your trash and call your parents to tell them where to pick you up.”