College bows to SJW demands, then makes the correct decision 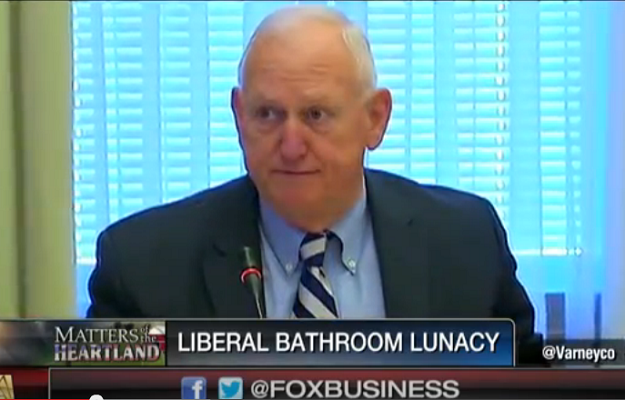 Lieutenant General (Ret.) Jerry Boykin, one of the original members of Delta Force and later its commander, was fired from his teaching position at a Virginia college because of comments he made at a conservative gathering. The all-male college, Hampden-Sydney College, was apparently inundated with SJW’s demanding that the decorated hero be removed from his teaching post, so they removed him . . .  only to then be faced with a new onslaught of outraged Americans demanding that the college reverse its decision. It did.

An all-male college in Virginia has reversed its decision to fire a prominent retired U.S. Army general hours after reports that he was removed over political correctness provoked outcry.

Hampden-Sydney College decided to offer Lt. Gen. William “Jerry” Boykin a one-year contract, walking back its decision to fire Boykin after he made controversial comments about transgender bathrooms that angered LGBT activists.

Fox News first reported Thursday that Boykin, an original member of the Delta Force who served as undersecretary of defense for intelligence under President George W. Bush, had been fired after nine years of teaching at the school after criticizing transgender bathrooms.

“The first man who goes into the restroom with my daughter will not have to worry about surgery,” Boykin said of the debate surrounding transgender bathroom rules during a speech to conservatives in March.

The comments angered LGBT activists, dozens of whom signed a letter demanding the college fire him. They accused him of calling for violence against transgenders, he said.

“I never said homosexuals. I never said transgenders,” he told Fox. “I was really talking about these perverts who would use this as a way to get into the bathrooms with our wives and daughters.”

According to the Washington Free Beacon‘s report, Boykin received an outpouring of support once news of his firing was made public by Fox News’ Todd Starnes.

He said he was fired without warning and without being afforded the opportunity to defend himself. A representative for the college told Fox that his contract was “simply not renewed” and denied that the comments about transgender bathrooms were the “determining factor” in his firing. The representative did, however, expressed concern that the statement “appeared to advocate or approve of violence.”

“Hampden-Sydney College has fired General Boykin. At a time where young people are desperately seeking hope and inspiration, you would think General Boykin (who had taught there nine years) would be one of their most valued faculty. But instead, he fell victim to the PC police,” Cruz wrote in a Facebook post.

Boykin is an outspoken opponent of Obama’s latest overreach concerning the use of bathrooms by transgender persons in public schools across this nation.

Stand up and be counted. Do not let your voice be silenced. Stand on principle and we shall win the day! https://t.co/wAGhcNG9hu

Add your voice to 85K+ that are standing up to protect local schools from Federal Overreach into Kids' Restrooms https://t.co/U0TpLOYxuC

Boykin is Executive Vice President of the Family Research Center and is also, unsurprisingly, labeled an “extremist” by the Southern Poverty Law Center.

In his statement upon the college reversing its decision to let him go, Boykin is gracious and offers some thoughts about the need to stand firm on principle and to push back against the SJW crowd.

First, there is strength in unified numbers. The radical Left and LGBT activists completely underestimate the impact of #freedom-loving #Americans banding together to protect our First Amendment freedoms. Many people spoke out on my behalf and I am eternally grateful that they stood with me. Their unified voices allowed me to return to Hampden-Sydney.

He also notes that his “reinstatement is a victory for academic freedom and free thought on a college campus. The free exchange of conflicting ideas must be the bedrock of every college campus in America. This essential exchange has been greatly wounded by the PC police, but it can be restored to college campuses around the country if, in unity, freedom-loving Americans speak out. Bottom line: when you stand, freedom prevails.”

I wonder how far they will go to normalize aspects of transgender spectrum disorder. It started with homosexual orientation and progressed to crossover.

Actually, transhuman (e.g. reactive parenthood, planned parenthood) preceded transgender. Then there is the semantic quibble between rape and rape-rape of children.

SJWs make a hell of a racket, but fold like a cheap suit when you stand up to them.

I served for 7 years in the army as a radio operator, and I’m transgender. I have allot of respect for LTG. Boykin’s military service, but the man is as wrong as Gen. Omar Bradley was when he compared desegregation to a pointless social experiment back in the 50s.

LTG. Boykin IS a hero, but that doesn’t give him license to walk over people he knows nothing about, and whom he cares to know nothing about. Transgender people aren’t perverts, we’re just guys and girls trying to live our lives in peace, I hope one day the good general comes to realize this, just as Gen. Bradley eventually realized his own errors.

You do realize that no one really cares if you are Transgender and no one is saying that Transgenders are a problem. The point is that you probably very happily used whatever bathroom you wanted and went on with life.

But that wasn’t good enough, there not being a problem wasn’t good enough for SJW in search of their cause of the day and trying to pass laws that will put others in danger to solve a “problem” that was made up in their head and when that happens the only way to combat it is to go to the other extreme and it is sad. But the right didn’t start this and until the SJW’s decided to make an issue out of it, no one cared where you pee’d, so blame them.

Thank you for your service from the 1st Rangers, I am happy to have you as a brother/sister soldier, no matter how you dress.

The two are no where near the same and never will be. Until and unless humans can do caterpillar to butterfly level of genetic manipulation you will never change one sex to another. Even then somebody who believes they are something they are not does not make them what they believe to be and they cannot force an honest person to say that they are nor can they force us to pretend they are in public.

Any parallels to H.G. Wells’ 1896 novel “The Island of Dr. Moreau” are purely fantastic:

Sometimes it kills me that I nearly died, and watched others die, to protect your right to hate and slander people like me. But we did, so enjoy that freedom and remember the thousands of LGBTQ service members that lost their lives over the last 240 years to protect yours.

I don’t hate you. I love you. Only someone who loves you will tell you the truth no matter how difficult. The people who lie to you and enable your delusions because it is easier or makes them feel better hate you. They are too dishonest or lazy to want you to hear the truth.

I haven’t slandered you in any way. I have only spoken a truth to you. If you didn’t want a response you should have said so. Or perhaps you prefer a Greek chorus?