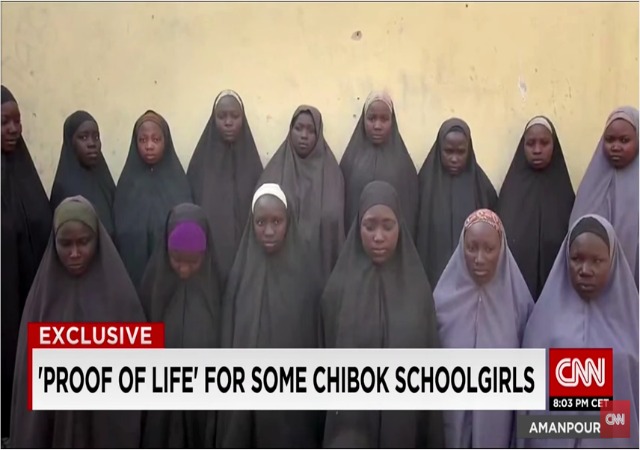 A civilian fighter in Nigeria has rescued one of the 276 girls kidnapped by Boko Haram in 2014.

The fighter with the Civilian Joint Task Force (JTF) recognized Amina Ali Nkek in the Sambisa Forest, located near the Cameroon and Nigeria border. Officials believe the radical Islamic group has held the girls in the forest since the kidnapping.

The kidnapping launched the #BringBackOurGirls campaign across the world and social media, including First Lady Michelle Obama.

Bukky Shonibare, one of those who started the campaign, talked to NBC News about the rescue:

She told them that she had escaped Boko Haram and had a baby.

Her identity was later confirmed by residents of her hometown, who said they were “100 percent sure that this was one of the Chibok girls,” according to Shonibare.

There was no immediate confirmation from Nigeria’s presidency or military.

The military performed an operation against Boko Haram on Tuesday near the place where the fighter found Nkek. They killed at least fifteen Boko Haram fighters.

Boko Haram terrorists kidnapped the 276 girls from their school on April 14, 2014. 57 girls have escaped the terrorists since the abduction. Nkek is the first one actually rescued from the group.

CNN published a video of the girls on the two-year anniversary last month. The network received the video from the terrorists to show “proof of life.” The government and military watched the video before CNN showed the parents.

Rifkatu Ayuba catches sight of her long-lost, desperately missed, now 17-year-old. “My Saratu!” she wails, reaching out to a laptop screen, the closest she’s been to her child in two years. She is desperate to comfort her little girl, but helpless.

Saratu Ayuba is one of 15 girls seen in the recording shown to some of the families for the first time at an emotional meeting this week. Wearing a purple abaya, with a patterned brown scarf covering her hair, Saratu stares directly into the camera.

In January, the BBC’s Jimeh Saleh traveled to the Sambria Forest with the Nigerian army. However, no one has actually moved into the forest because the terrain with no roads could pose many problems for the army. The military also avoids the main roads because the terrorists have lined it with explosives and weapons.

The film “Man on Fire” comes to mind.