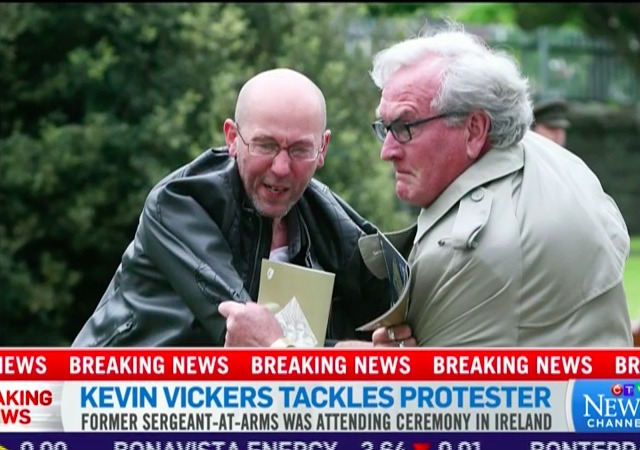 Canadian Ambassador to Ireland Kevin Vickers to the rescue again! He tackled a protestor who attempted to interrupt a memorial service in Dublin.

The name should ring a bell since Vickers shot gunman Michael Zehaf-Bibeau in 2014 when he ambushed Parliament Hill. Vickers served as the House of Commons sergeant-at-arms at the time.

Vickers attended the memorial to commemorate “the 100 British soldiers who died during the Easter Rising, also called the Easter Rebellion, when Irish republicans tried to overthrow British control of the country by force.” The CBC reports:

Vickers was the first to respond to the disturbance, tackling the man and leading him away from the ceremony. Police later arrested the protester.

“This man just ran forward and started screaming, ‘It’s a disgrace.’ He was tackled by somebody and it was only after that I realized it was the Canadian ambassador,” an unnamed eyewitness told the Irish Independent.

“The whole thing lasted about a minute. The Canadian ambassador grabbed him. There was a struggle and gardaí [the police] wrestled him to the ground. Without hesitation [Mr Vickers] jumped out from the middle of dignitaries,” the eyewitness said.

Vickers became a national hero when he shot and killed Zehaf-Bibeau in October 2014. Reports said Vickers was in his office when he heard the gunshots. He took out his gun and tracked down Zehaf-Bibeau in the halls of Parliament. Parliament greeted him with a standing ovation the following day.

My kinda Canadian! They still make some real men up in Extreme North Texas…

Actual video here, where Mr. Vickers intercepts the protestor and moving him away from the podium and moves him towards the police. Well done, sir.

Agree with the tackle 4 disruption..

However a Memorial in Ireland for many of those 100 British is Disrespectful and in Very Poor Taste as British Troops were documented killing unarmed civilians, violating rules of war with some found to have summarily executed Irish in the streets without trial, and the British held military trials with no allowed defense by accused, no appeal then executions.

Thank you. I wanted to say something to this effect, but you have said it so nicely. The British were not angels in Ireland (ever), and this is kind of akin to Japan honoring its dead at Pearl Harbor IN Hawaii.

And why did they kill those “unarmed civilians”? They didn’t just wake up one morning and decide to murder someone. They were defending themselves and their colleagues from an armed attack. If innocent people got killed in the course of that defense, the blame rests on the people who chose to attack them in the first place.

What makes you think these “unarmed civilians” were innocent people, and not members of the insurrection who happened not to be carrying a weapon at that moment? Is an enemy combatant supposed to be immune from being killed just because he’s not carrying a gun?! That’s certainly not the rule when fighting an enemy who keeps the rules of war and fights in uniform, and there’s even less of a reason that it should be the case when fighting bandits who fight without uniforms. In normal war anyone in an enemy uniform is fair game, even if he’s asleep at the moment, and even if he never wields a weapon more deadly than a potato peeler or a truck; how much more so when putting down an illegal insurgency, where you can’t tell who’s a combatant. We see the same nonsense in Israel, where any Arab killed, who isn’t visibly carrying a weapon, is counted as a “civilian casualty”.

yes, but WHY were the English in Ireland to be worried about armed insurrection? 900 years the English had been trying to conquer Ireland, and bleeding it dry of food and other resources. I am sorry, I cannot feel bad for the English soldiers in 1916 in Ireland. well, I can a bit, as they were only the latest pawns sent there, for, as usual, it is the politicians safe in the capitol far away that are to blame.

Why did British troops kill innocent civilians? because of the armed uprising after 900 years of human rights abuses including starvation of the Irish population.

Shooting unarmed civilians is NOT “defending themselves” it is suppression by terror and the most egregious human rights abuses.

Irish involved in the uprising wore uniforms an those without full uniforms had arm bands or hats to identify as combatants. Irish falsely believed the British would honor signed rules of war treaties.

There is NO moral equivalence of British Troops that committed war crimes to the IDF that does back flips to avoid the slightest human rights abuse.

There is NO moral equivalence of the Irish uprising to the immoral religious Muslim war cult invading Israel to go on Muslim jihad.

Stout-hearted men are few and far between, a true rarity. The “Politically Correct” culture has swept over Western Civilization like the tsunami from a 9.5 earthquake; we all swim in it. For someone to stand up for what’s right, regardless of the convenience or feelings, is a pleasure to see. Western Cultures could use another 500,000 like him, IMO. Sadly, the invasion proceeds apace because there are none to stand in the gap.