Raises legal minimum for cigarette purchases to 21, as voters prepare to make pot legal in November. 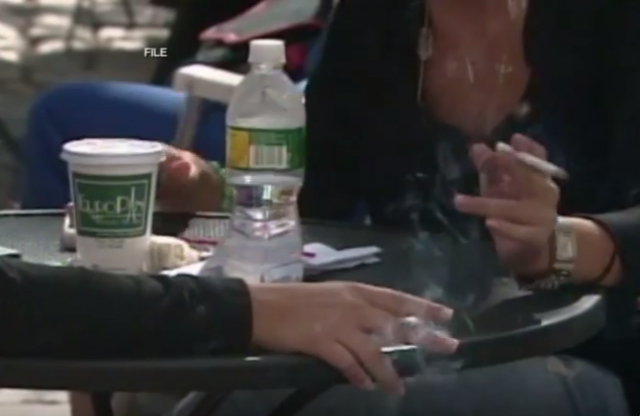 Finally, some good news from the Golden State!

It looks like we have solved all our other problems, so Governor Jerry Brown was able to focus on the issue of paramount importance: Smoking!

Gov. Jerry Brown on Wednesday signed a package of bills that will regulate the manufacture and sale of e-cigarettes and increase the legal smoking age from 18 to 21.

Other bills the governor signed will close loopholes in existing smoke-free workplace laws and require that all K-12 schools be tobacco-free.

Democrats, doctors and anti-smoking activists who have struggled to break the industry’s grip on the Capitol applauded the bill signings and showered the governor with praise.

Laphonza Butler, president of SEIU California, the union that represents many of the state’s health care workers, said that 2016 will go down as the year the state finally “stood up to this predatory industry.”

True, a union leader would understand the concept of “predatory”. Perhaps Butler should look up the word “transparency“.

California’s public employee unions used their muscle this week to fight back a legislative bid to open their books, killing in committee a bill that would force them to post online how dues are spent — and a second bill requiring a union vote every two years.

“These members want to belong to a union. They want to be represented by a union. They just want to know where their money’s at,” said bill sponsor Assemblywoman Shannon Grove, a Republican.

The move follows the passage earlier this year of similar, age-raising legislation in the city of San Francisco.

The only bill in that package Brown failed to sign was one that allowed for local taxes on tobacco products. That’s because Brown was more focused on passing a substantial increase in the state cigarette tax that is on the November ballot, raising it from 87 cents per pack to $2.

And because our politics isn’t schizophrenic enough, guess what else will probably be on our November ballot?

A coalition of legalization supporters gained 600,000 signatures petitioning the state government to put the Adult Use of Marijuana Act on the ballot, the L.A. Times reports. With voters’ support, the legislation would legalize possession, transportation and use of up to an ounce of marijuana for anyone over age 21, and people could grow up to six plants for recreational use. Retail sales would be taxed at 15%.

Democratic Lt. Gov. Gavin Newsom, who supports the measure, said in a statement, “This November, California voters will finally have the opportunity to pass smart marijuana policy that is built on the best practices of other states, includes the strictest child protections in the nation and pays for itself while raising billions for the state.”

This November, I was planning to go out for a stiff drink after I voted. Now, I think I will have one before.

Think before you vote. This could very well ruin all the punch lines in a Cheech and Chong movie for posterity.

It’s known that pot smoke is worse for you because of the intent to hold it in for as long as possible. There is no hypocrisy druggies won’t resort to to get a buzz.

True, but do you know ANYBODY who smokes 21 cigarette-sized joints…solo…every day?

I saw this in the paper, today. These wackobirds are delusional.

They want to raise the smoking age to 21, while they have engineered a pot pipeline to every one of their middle schools and high schools.

I know this, because I have confiscated some really aromatic, well-manicured medical marijuana buds from each of my high-school students.

Meanwhile, that medicinal pot is associated with paranoia and psychotic breaks, due to its high concentration of active ingredients.

and which tax are they going to raise when the revenue from cigarette purchases declines?

Anyone who thinks decriminalizing pot is wrong is an anus-cavity.

Providing free access to weed in all forms is a terrific idea, primarily for lefties who want to channel Bob Marley as an accessory to their general Franz Fanon panache. It will knock the bottom out of any residual motivation that they may have and induce a psychosis or dissociation in the more fragile psyches. Easy pickins.