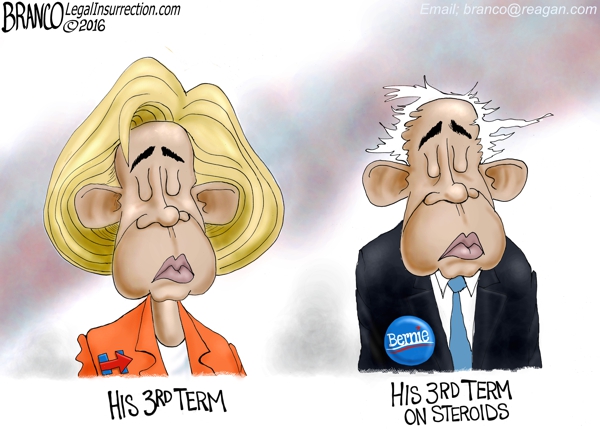 Great depiction of the Dem’s dilemma!

Boy, it’s going to be hard on our country and economy if either of these communist dingbat’s get into the White House. Well done Branco.

Only one change though …

And suggest another alternate title, with a third political figure in the middle of these two, saying, “Get in between all the Crooks and Nannies.”

And on the Republican side, “his third term – lite”

Harry Reid says “not only no, but hell no” to Liz Brown as VP

“Do you think it’s wise to even consider pulling somebody like a Sherrod Brown (D-OH) or a Elizabeth Warren (D-MA) out of the United States Senate at a time when Democrats are trying to win the body back,” MSNBC’s Joy Ann Reid, no known relation, asked the senator.

“If we have a Republican governor in any of the states the answer is not only no, but hell no,” Reid replied. “I would do whatever I can and I think most of my Democratic colleagues here would say the same thing.”