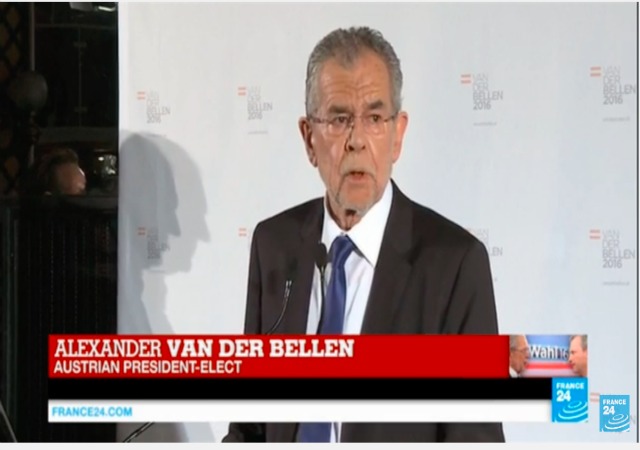 The Interior Ministry counted over 700,000 ballots, almost 12% of the country’s registered voters, to determine the winner.

Hofer led Van der Bellen on Sunday with 51.9%. He had the potential to become the European Union’s first far-right leader since the end of World War II. 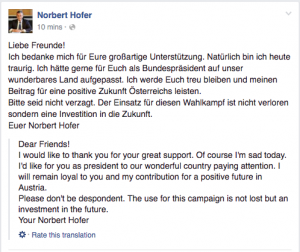 Van der Bellan chose to campaign with a pro-European Union platform while Hofer “tapped into anti-EU sentiment and fears about rising numbers of asylum seekers.”

The president of Austria is considered a ceremonial post. From the BBC:

It is mostly a ceremonial post. But the president does have the power to dissolve the National Council – the more powerful lower house of parliament. That triggers a general election. The president can only do that once for a particular reason – he cannot use the same grounds to dissolve it again.

Van der Bellan, a former economics professor, considers himself a “child of refugees” since his Russian-born father and Estonian-born mother fled to Austria in the 1940s. He left parliament in 2012 when he became a Vienna city councillor and “led the Austrian Greens from 1997 to 2008.” He stepped down when the “party lost votes for the first time in a decade” in 2008. In 2016, he ran in the presidential election as an Independent, but the Green Party financed his campaign like they did this year.

Gee…The absentee ballots tip the election to the leftie at the last moment.
Did not see that coming.

Seems like the numbers being waved around are that *80%* of the mail-in ballots went for the Green party candidate. In a contest decided by inches, having a couple of yards worth of ballots just show up in the mailbox is far more than just suspicious.

Since when is telling the truth about the hijab considered “far Right?”

So Austrians choose Eurocrats and Islamist domination over common sense and local rule. Such a shame.

A vote for anti-native policies. Either the Austrians are a cowed people or there was fraud at the twilight’s (i.e. penumbra) fringe.