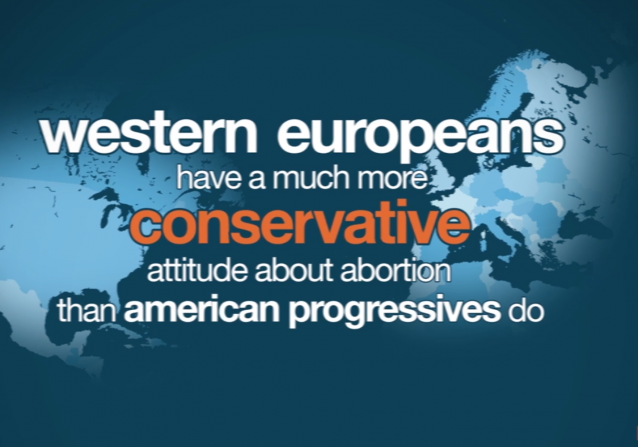 Surely the progressive ideological utopia across the pond is more lenient when it comes to the convenient disposal of unborn human life, right? RIGHT?!

Though they constantly bemoan laws that make abortion-on-demand more difficult, the progressive abortion paradise is actually in the United States, where laws are significantly less stringent than those of most Western European countries.

Texas is a favorite target of the pro-infanticide crowd, who would probably be shocked to know that in Germany, all abortions are illegal after twelve weeks. Even those within the permitted twelve week time-frame require a three-day waiting period and mandatory counseling. Mandatory waiting periods and no outrage brigade. Must be nice. And yeah, Germany’s abortion laws are more restrictive than Texas.

In the good ol’ U.S. of A., abortions are legal in every state up to a horrifying twenty weeks. Meanwhile, the Netherlands imposes a mandatory five-day waiting period for abortions before the twelve-week marker and requires counseling that includes options like carrying the baby to term and adoption. Under eighteen and want an abortion? You’ll need parental consent for that in the Netherlands.

Western European countries might not get it right on all policy fronts, but they seem to universally accept abortion as a much more serious decision than American Progressives are willing to consider.

And yet their birth rate is still in the tank.

The “final solution” is only one possible choice promoted by population control advocates. There is more than one way to normalize evolutionary dysfunction and debase human life.

Then there is planned parenthood or clinical cannibalism. That would be another.

Another question jumped out at me watching this video too.

Does Europe not have the equivalent of Planned Parenthood advocating for the right? Sounds like they don’t. At least, that is what my gut tells me.

Europeans have done a much better job of reconciling moral and natural imperatives than liberals, and perhaps [neo-] conservatives, too. Now, if they can only survive the consequences of progress in anti-native policies. The monetary and social opiates have a progressive cost with class diversity schemes.

Planned Parenthood founder Margaret Sanger was a HUGE fan of eugenics, and decreasing the number of minority (read: black) babies born in the U.S., in order to ensure white supremacy in politics. Modern-day “Progressives” carry on that “proud” (*snerk*) tradition, seeking to keep blacks as a reliable voting block but not gain too much freedom or political will of their own.

Western European cultures don’t have this issue; they are largely homogenous — they have very small minority populations to begin with, and the minorities who do live there are largely of similar mind and attitude to the majority-white population. Thus, the socialists in Western Europe can respect the sanctity of human life without risking their political processes. They don’t need to enact a pro-abortion eugenicist regime to protect their ideology.

Kinda says something about American “Progressives”, though, when they are perfectly willing to sacrifice untold millions of American babies to keep their voting constituencies in line and ensure their own power, doesn’t it?

None of Europe’s Mediterranean countries were mentioned in this video.

If it were the mother’s body she would be the one that dies as a result of the abortion. Very poor logic applied in the realm of abortion on-demand.