But wait! She just meant Zionists. 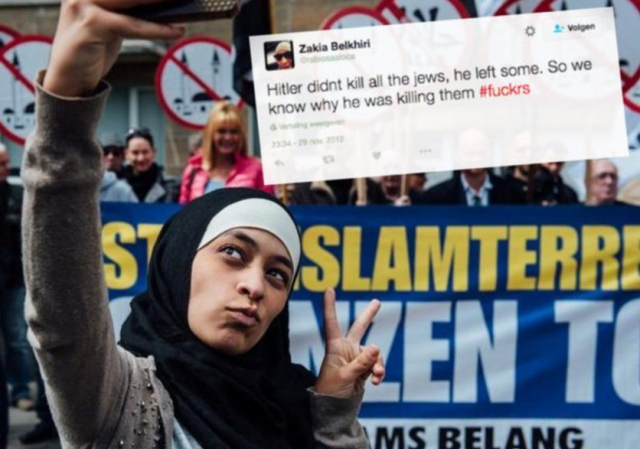 It was the selfie heard round the world.

Zakia Belkhari, a young Belgian Muslim woman of Morrocan descent, took a series of selfies in front of a group of anti-immigration protesters last week.

The images went viral on social media and across the progressive media. Vox.com termee it a “brilliant” symbol of peace and defiance in the face of “Islamophobia” and “hate.” 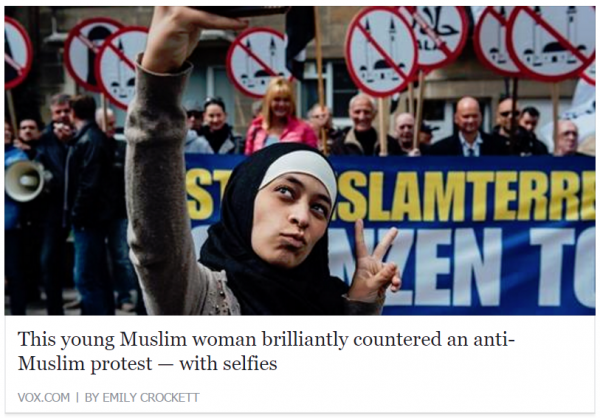 Teen Vogue hyped the story (in a post that has gone missing): 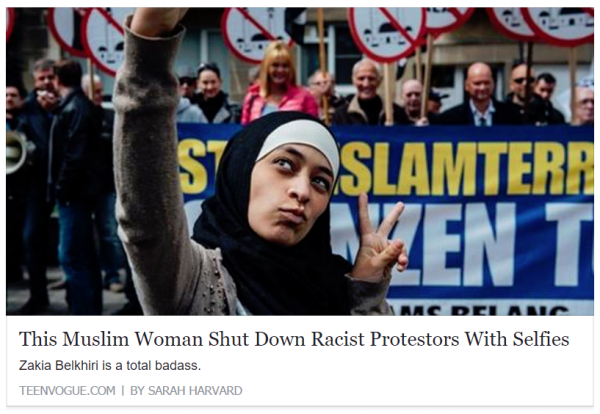 Well, the story doesn’t have a happy ending.

Turns out some internet sleuths dug into her social media history, and found some very ugly stuff — like lamenting that Hitler didn’t finish off the Jews:

On Facebook she posted how much she hates the Jews:

A proud young Muslim woman, standing in front of a group of anti-Islamic protestors, smiling cheekily into the lens of her camera as she takes a selfie. It was a powerful image. The story of the woman has since been posted in The Huffington Post, Vox, and Vice, as well as a number of other left-leaning media outlets in the past two days.

. . . . It didn’t take long though before other elements of Belkhiri’s identity started to surface. 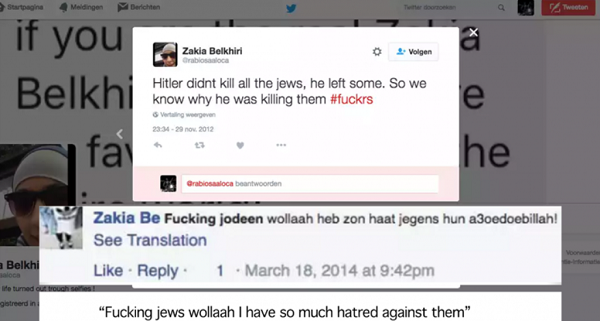 This is notwithstanding that according to this article by the BBC, Belkhiri said in an interview that she took the photos in order to show “that we can live together, not next to each other but with each other”. Perhaps the caveat of us being able to live together is that this clause is nullified if you happen to be Jewish.

Belkhiri has since gone on a deleting spree and has attempted to get rid of many of her old antisemitic and racist tweets, most of which are now only available on archive, but not before some savvy redditors wised up to what she was doing and captured the messages. In some ways, though, it is too late; the original story, with a compartmentalized narrative of an innocent Muslim woman heroically standing up to ‘hate’ and taking selfies for the cause of peace and love has already spread across the world.

The narrative is unraveling, however, as Belkhiri has alternated between denying these disgusting tweets and trying to explain them. When she said Jews, she mean’t Zionists (isn’t that what all the Jew haters now say?).

The tweets to which this person refers appear to have been deleted in favor of a new explanation for her prior statements. 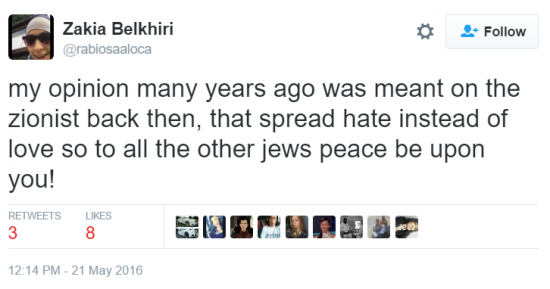 So now even the BBC, one of the most aggressive promoters of the tweet, has had to acknowledge her seedy background.

So young woman who "heroically" opposed anti-Islam rally is herself a neo-Nazi bigot scumbag. https://t.co/om2F3NuzQ2

When will Vox, HuffPo and all the rest acknowledge that their hero was just another Jew hater? And when will they examine what that means.

[Fuzzi Slippers contributed to the drafting of this post.]

Notice that she resembles the editors of the Huffington Post.

I prefer the company of a Jew before Muslim any day!

All she’s missing is her Hillary For President button.

What American university will this freak be teaching at after she’s honored by Obama at the White House?

Hmmm. Looks like Put Up or Shut Up time for European hate-crime legislation.

I predict another failure, to be put up on the shelf next to all the other failures of those Old World sophisticates.

“You’re either part of the solution … or you’re part of Europe.”

Peace and duck-face to y’all! Salaam (no shalom)!

Most people aren’t necessarily anti-Muslim as they are anti-getting their head chopped off by someone they thought was a rational human being.

But one can’t take that view with certainty of any Muslim these days. I know I steer clear of even the hijab wearers (are we sure that’s a woman under there? and even so, they’ve done some homicide bombing too and knifing attacks)

That’s what terror does. It make the target population afraid to live a normal life in expectation of continuing peace.

And THAT is one of the goals of Muslim Terrorism; too ignite the world in a Muslim vs Everyone else War.

They believe they’ll win. Because they believe dying for that goal gets them into paradise.

Whereas all the world gets is a status quo.

Eventually enough of the strong anti-Muslim people will die and then the rest will surrender.

This has been how Islam has spread since the 7th century. By exhausting their target and out breeding them while destroying their civilization.

And the Western World has let them get too strong and numerous.

Well there was at least a recognition of the Holocaust.

Vox, HuffPo pushers of the terminal illness we call
progressive-ism.

The term “phobia” is another linguistic tool sacrificed on the altar of progressive corruption.

Oh, well. First, they [literally] disarmed the babies in a “final solution”. Everything that followed is merely icing on the dysfunctional revolution.

[I]n 1969 Allen Funt, his wife, and two of his young children took a flight from Newark to Miami. During the course of that flight, a hijacker grabbed a stewardess and put a knife to her neck, instructing the pilots to fly to Cuba.

Accounts vary on exactly what happened next, but according to the pilots and several passengers on the plane, including Marilyn Funt (Allen’s ex wife) and their child, Juliet Funt, … this is how it went down:

For a while, the passengers on the plane simply waited, frozen. That is, until one woman recognized Allen Funt.

All of a sudden she bolted up and said, “Wait a second! We are not being hijacked. It’s a Candid Camera stunt!”

The plane went absolutely crazy. Everyone started laughing. People were stamping their feet. Attention drifted off the hijackers. People were asking [Funt] to sign their air-sickness bags.

During the entire ordeal, however, Funt kept insisting that he wasn’t involved and that they were actually being hijacked. No one believed him. In fact, at one point, he saw a priest and tried to persuade him to convince everyone else that it wasn’t a stunt, that the hijacking was real. Even the priest wasn’t buying it.”You can’t get me, Allen Funt,” he said. “Oh no you don’t!”

Later on, when the hijacker heard the commotion, he peeked out of the cockpit and into first class and everyone allegedly applauded, as though recognizing him for his role in the joke.

Funt himself was so flustered with it all that he even attempted to hatch a plan to take care of the hijackers himself, but a flight attendant and his wife prevented him from doing so.

The reveal, however, came when the plane actually landed in Havana instead of Florida. The plane was quickly surrounded by Cuban military officers. That’s when the people on the plane realized for the first time that it was actually a hijacking. The twist here, however, is that the passengers were so unhappy that, as they filed off the plane, they took their anger out on Funt, insulting him for tricking them.

“And the last person in that line turned to [Funt],” according to his daughter, Juliet, “and said, ‘Smile, my ass.'”

Anyone who thinks they mean “Zionists” should take a look at at their victims and the people in their “anti-Zionist” cartoons. Or are Zionists known for wearing long black coats and speaking Yiddish?