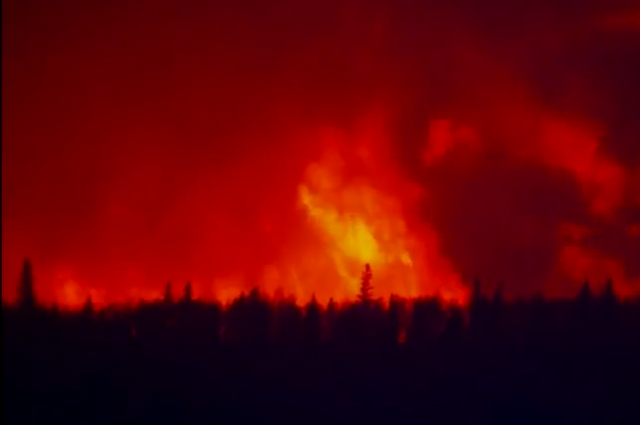 Mother Nature has engaged our neighbors to the North in a battle, as a massive wildfire has consumed the forests around the oil-sands region of Fort McMurray in Alberta, Canada since May 1.

The Canadians may finally be making some progress in containing the conflagration after one-week of intense fire-fighting.

Canadian officials showed some optimism on Sunday they were beginning to get on top of the country’s most destructive wildfire in recent memory, as favorable weather helped firefighters and winds took the flames southeast, away from oil sands boomtown Fort McMurray.

There was still no time line, however, for getting Fort McMurray’s 88,000 inhabitants back into what remains of their town, or when energy companies would be able to restart operations at evacuated sites nearby. The wildfires have cut Canada’s vast oil sands output in half.

“It definitely is a positive point for us, for sure,” said Alberta fire official Chad Morrison in a news briefing, when asked if the fight to contain the flames had a reached a turning point.

“We’re obviously very happy that we’ve held the fire better than expected,” said Morrison. “This is great firefighting weather, we can really get in here and get a handle on this fire, and really get a death grip on it.”

This is good news, as some projections had the blaze doubling in size and threatening the adjacent province of Saskatchewan.

The cause of the wildfire is yet unknown, though a compendium of reports from Canadian Channel 4 News indicates that the region experienced a severe drought and no rain had hit the area for over 2 months.

So, it shouldn’t be a surprise that the climate change eco-activists are using this disaster as “proof” of their questionable theories.

In January a Canadian study suggested that warming would lead to a “higher frequency of extreme fire weather days” across the country.

The author of that paper, Dr Mike Flannigan from the University of Alberta, seems in little doubt that climate change was at least partly responsible for the outbreak around Fort McMurray.

“This is consistent with what we expect from human-caused climate change affecting our fire regime,” he told reporters.

A number of research papers have highlighted the fact that warming is leading to an increase in wildfire risk. Studies have also shown that northern latitudes are feeling those impacts more strongly.

The failure to properly prepare for wildfires that will naturally occur provides a better explanation. A 2012 analysis of the forestry program for that area suggests understaffed, under-resourced forestry workers had been struggling to contain a growing risk of wildfire. Excessive fire suppression led to a buildup of combustible materials, combining with recent drought conditions, exacerbating the risk of a wildfire.

The wildfire will likely be the costliest in recorded history for Canada. Fort McMurray is the center of Canada’s oil sands region; therefore the impact on the fields has already cut the crude output from the region in half (about one million barrels per day). One analyst estimated insurance losses could exceed C$9 billion ($7 billion).

The wildfire hits Alberta hard, as the province was already reeling from a recession.

It’s the latest blow to Alberta, already grappling with the economic toll of a two-year oil price slump in one of the world’s most expensive places to extract crude. More than 40,000 energy jobs have been lost in Canada since the price crash began in 2014, pushing the provincial economy into recession.

More than 80,000 people have left Fort McMurray, where the fire has torched 1,600 homes and other buildings.

So far there are no reports of damage to production facilities. Most of Alberta’s oil and gas facilities have their own firefighting crews and have physical defenses against wildfires, such as gravel fields and fire breaks, said Chad Morrison, a senior wildfire manager for the Alberta government.

…Key pipelines were closed Thursday, and a major one reopened Friday morning, according to analysts for Genscape, which monitors the pipelines. Much of the oil from the tar sands is refined in the U.S., including at the Suncor plant in Commerce City. The impact on the U.S. oil market will depend on how long the interruption lasts.

Let’s hope that the new projections are on track, and the Canadians contain and control this disaster quickly.

In a way, they’re not entirely wrong. The provincial government cut the firefighting budget by 80% to further increase other areas of the budget (mostly welfare spending). [Source: an Albertan’s anecdote, I’ll try to find a more citable one]

Huge wildfires are normal for the forested parts of this hemisphere, and the national parks in the United States have the burn marks to prove it.

I do not mean to sound unsympathetic to our friends to the North. Their efforts to contain it are heroic and well worthwhile. My sympathies to those who have been burned out or displaced or lost loved ones. It sounds like the number of people killed has been small, due to their own co-operation and effort. For that, they deserve our congratulations.

Wild fires are so normal that whole species have evolved around them. Without a periodic wildfire, there are conifers that don’t reproduce “normally”.

One of the things that’s made North American wildfires so “huge” is the stupid fixation among forestry “experts” against ANY fire. Fire is a normal and “natural” thing in forests, and larger trees are well adapted to the brush fires that cleanse the fuel around them.

Yup. The loss of property is sad. Canada’s costliest natural disaster? Perhaps, but it’s the disaster we have, it makes good copy, and to challenge or verify it is time consuming work, so okay. However, in the never ending search for blame no one seems the least chagrined by contradictions in their pronouncements that attribute the fire to the lack of fires, that the best control is to prevent fires, so we need more money to do that. Circular logic, but one does what one must to get to the last part – we need more money.

A better approach might be to improve fire protection, building guidelines, and fire fighting capabilities at the local community level to improve their ability to protect themselves when these fires occur and simply (easily said, I know) contain fire in the forests. This was a frustration heard more than once from residents in the CO Springs area several years ago when wildfires there did so much damage.

This, of course, begs the question; in nominal or real dollars?

USING fire as a sound forestry practice is something that is SLOWLY gaining traction in the U.S. Hopefully, it will be adopted as a Canadian practice, as well.

A better approach might be to improve fire protection, building guidelines, and fire fighting capabilities at the local community level

Bingo! I don’t know if you noticed or not, but in the videos taken while driving through the burned out town, here and there some structures remained unscathed. There was a reason for that. When building a home, there are MANY things that can be done to make the structure fire resistant. About 15 years ago, Fine Homebuilding magazine ran a feature issue on this very subject. The main thing is to clear all trees and brush at least 50′ from the structure. The roof needs to be “fireproof” and even a metal roof is no guarantee if it gets so hot that the plywood underneath ignites. The soffits under the edges of the roof also need to be fireproof, like Hardi-Soffit cement board. Once the exterior walls catch on fire, the flames want to rise up through the soffit into the attic – then it’s all over.

Sadly, fire safety is the last thing most homebuyers or homeowners think about, and building contractors could give a sh*t less. Insurance companies don’t give you a break on your premiums regardless, so why bother?

It is a well known fact that where were no forest fires before global warming kicked in and this fire was probably caused by some careless hunter who was trying to kill Bambi’s mom with his assault rifle. It’s all because of the meat eaters and cows. If we all ate tofu made from organic soybeans the world would be a better place. LOL!!

When I was four, the lady next door called me, ‘_____ ______ you little bastard.’ She called me that from time to time over the next 50 years or so until she passed away. I am glad she didn’t call me a little activist.

You outlived her; go piss on her grave and get over it.

I experienced some of that global warming in July 1967 while driving back to the lower 48 from Alaska. I drove through a stretch of scorched earth on either side of the highway as far as the eye could see, and drove for several miles before seeing green again. This was in Western Canada. I know it was global warming because there was a 6.6 earthquake in Fairbanks in May or June of that year followed by flooding in July that put Fairbanks underwater. If that wasn’t bad enough, Hurricane Beulah hit Texas soon after I arrived there. What else can explain disasters like this except global warming?

Does anyone know what Al Gore was doing that summer?

They are many interesting comments from Canadians and Australians who have lived through some of these intense fires. One of the points for the Canadian fire is that this is a boreal forest which is a fire-dependent ecosystem. The greenies were the group that forced a change relating to forest management. It’s now an aging forest and fire is the only way to clear things up.

Homeless mutts in San Francisco are pooping at the curbs.

the climate change eco-activists are using this disaster as “proof” of their questionable theories.

On and on, they go. Morons.

They already said it was caused by “humans”. This is just the preamble.

If GWB were this evil, they’d all be in the camps now.

“The boreal forest is a fire-dependant ecosystem. The spruce trees, pine trees, they like to burn,” Bernie Schmitte, forestry manager in Fort McMurray, explained.

“They have to burn to regenerate themselves, and those species have adapted themselves to fire. Their cones have adapted so they open up after the fire has left, and the trees have adapted in that once they’re old and need to be replaced, they’re available to fire so they burn.”