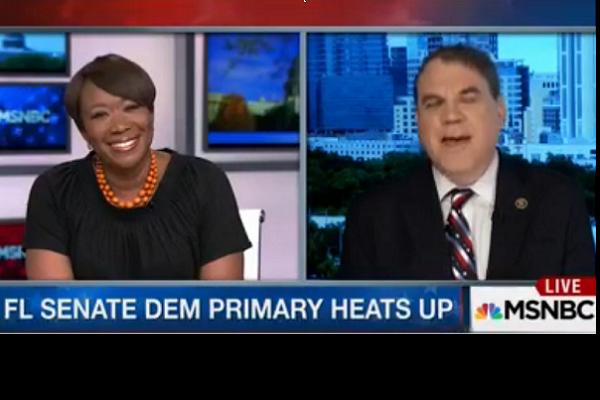 In a combative interview this morning, Democratic Senate candidate and current U.S. Rep. Alan Grayson accused MSNBC host Joy Reid of “smearing” him and “spreading lies” about him in relation to a congressional ethics investigation over a once-offshore hedge fund associated with the Orlando congressman.

Reid initially wanted to ask Grayson about his confrontation with Senate Majority Leader Harry Reid this week, but almost immediately after she started speaking, Grayson interjected.

He started talking over Joy Reid and demanded she “correct the record” in describing the status of the ethics probe.

Grayson contends the investigation is over because an investigative subcommittee wasn’t formed. He notes that no sanctions have “ever” been brought without such a committee being created.

In April, the Office of Congressional Records issued a release that flagged several potential violations of federal law, and the release recommended that the Congressional Ethics Committee continue the investigation.

As the Tampa Bay Times report and as Joy Reid attempted to point out, the investigation does remain open.  Grayson, however, is adamant that doesn’t mean anything because no subcommittee to continue the investigation has yet been formed by the Ethics Committee.

Things went downhill from there.

After the rocky start to the MSNBC interview, Reid attempted to move the interview along with further questions about the investigation’s findings, such as a marketing document that bears Grayson’s name, photo and credentials.

But that only made the exchange more explosive.

“So what? If you Google my name, you’ll see a lot of pictures of me,” Grayson said. “That doesn’t mean I created those pictures.”

“You are completely misinformed and you’re spreading lies,” Grayson continued, adding: “Why do you feel compelled to spread these lies?”

Reid fired back: “I feel compelled to read from a 74-page ethics report, which is, sir, about you.”

Does this have a prayer of winning a state-wide election in Florida?

Could you find THAT many stupid voters?

Galoompy could be a hanging chad away from being one of Dingy Harry’s buds.

Could you find THAT many stupid voters?

Well, no. I HAVE to believe that there are not enough Floridians…of ANY stripe…who could vote for this puke.

Next you’ll be telling us you ‘HAVE to believe’ in unicorns.

Hey Rags, there were enough to send him back to being a congress critter, so maybe you want to reconsider your belief on that point.
Just sayin’……

Hey, I get that there are whole Congressional districts of stupid/crazy people.

But this guy is too sleazy for ANY state-wide office, even in New York (heh…!!!).

Depends on how south Florida turns out.

Honestly I can’t believe that they voted him back into the house after they succeeded in getting rid of him the first time, so who knows.

Different district. His original constituents voted him out but when the Republicans redistricted Alan West’s district to make sure he wasn’t returned, Greyson stepped in and took the new district.