“It’s important for students to understand great people are complicated” 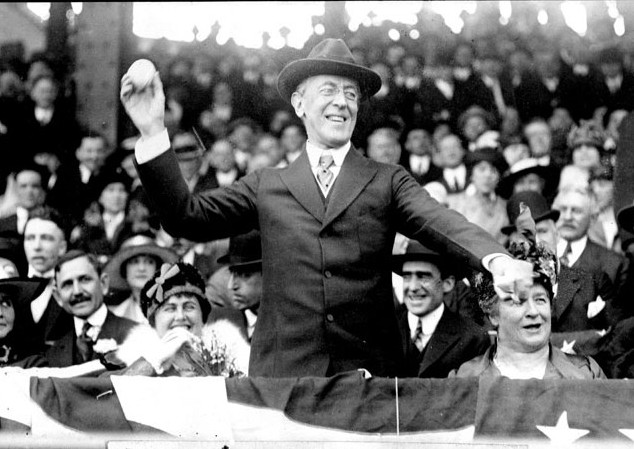 Monday morning, the Associated Press reported that despite his segregationist views, President Woodrow Wilson’s name would stay on the public policy school building at Princeton University.

Unlike Harvard, Princeton has chosen to live with the “complexity” of a leader from the past.

The board of trustees at Princeton University said on Monday that it had voted to keep Woodrow Wilson’s name on campus buildings and programs, despite student protests last year that led to a re-examination of Wilson’s legacy here.

Wilson has been a much-loved figure at Princeton, but in September, the Black Justice League, a student activist group, distributed posters around campus that revealed his views on race, including his comment to an African-American leader that, “Segregation is not a humiliation but a benefit, and ought to be so regarded by you gentlemen.”

As president of the United States, Woodrow Wilson reintroduced segregation into the federal work force, admired the Ku Klux Klan and did not believe that black Americans were worthy of full citizenship.

In the months after the sit-in, the board of trustees appointed the Wilson Legacy Review Committee to consider how the university should recognize Wilson, the 13th president of Princeton and 28th president of the United States. The committee invited scholars and community members to comment online and in small discussion groups.

“Princeton must openly and candidly recognize that Wilson, like other historical figures, leaves behind a complex legacy of both positive and negative repercussions,” the board said in a statement. The use of his name, the statement continued, “implies no endorsement of views and actions that conflict with the values and aspirations of our times.”

The protesters had also called for the removal of a mural depicting Wilson from a campus dining hall. But that decision is not up to the board of trustees. Instead, it is up to Eduardo Cadava, the head of Wilson College. Mr. Cadava has not made a decision on the mural at this time, but an undergraduate committee has formed to advise him.

Princeton created a website that included input from nine Wilson scholars and biographers, and received more than 600 submissions from Princeton alumni, faculty and the public. The program changes were recommended by a 10-member committee that met about a dozen times between December and March.

The board of trustees’ decision comes on the same day that the school launches an interactive exhibit putting Wilson in context for his era while emphasizing that he was a man apart from it – for better and worse. “In the Nation’s Service? Wilson Revisited” will run through Oct. 28. An interactive version is also available online, inviting viewers to tweet their reactions.

“What we were trying to do here is take the line that separates ‘Wilson good’ and ‘Wilson bad’ and expand it,” said Daniel Linke, archivist at the Seeley G. Mudd Manuscript Library at Princeton and curator of the exhibit. “There’s a nuanced debate to be had. He’s still affecting us today.”

At least someone gets it:

Cecilia Rouse, dean of the Wilson School, said the students have opened a helpful dialogue that is part of a national conversation.

“It’s important for students to understand great people are complicated,” said Rouse. “Rarely is someone black or white. We have to learn to live with that complexity. It’s what we’re grappling with on campuses across the country. We can sandblast a name from the building, but to actually change how we operate, and what our community is like is much harder.”

Of course, Wilson wasn’t JUST a racist. He was a lot of really terrible things, and he HATED the Constitution and its founding ideals.

He was a trail-blazing American Collectivist, and a very dangerous man.

I wonder what’s the stance of the justice warriors regarding Malcolm X’s position on segregation.
I wonder if they would be willing to remove Malcolm X’s name from streets, schools, libraries and memorials all over the US.

The damage that Wilsonian megalomania was able to inflict on the US was greatly limited by Henry Cabot Lodge; it’s the country’s great misfortune that the Republican Party doesn’t have anyone in the Senate of that caliber today.

1913, America’s worst year, and the adverse consequences from that year continue to roll in,

the 16th Am. became part of the Constitution

the 17th Am. became part of the Constitution

the Federal Reserve, the Creature from Jekyl Island, was created by Congress

Harvard and Princeton both got it wrong. The SJW demand to remove Wilson’s name from things at Princeton was a case of a blind pig finding an acorn; on this one occasion they were right. When someone’s name is on something because they donated money, then you have a contractual obligation to keep it there or return the money. But Wilson wasn’t honored by Princeton for his donations, he was honored for his so-called achievements and merit, neither of which deserve any honor, so his name should be removed.

“Princeton must openly and candidly recognize that Wilson, like other historical figures, leaves behind a complex legacy of both positive and negative repercussions,”

What are some of the positive ones? I can’t think of any.

One positive thing is Wilson didn’t have a third term.

So that means that they will be all happy good with Thomas Jefferson then?

I guess a membership in the protected class of bigots is more than lifelong.

“It’s important for students to understand great people are complicated,” said Rouse. “Rarely is someone black or white. We have to learn to live with that complexity.”

oh, ho! and these same people will have no problem with the new George Mason school of Law, right? Oh this is going to be FUN!

Woodrow Wilson, Margaret Sanger founder of Planned Parenthood, and Adolph Hitler all believed in eugenics. I’m sure there is a special place in Hell for the likes of these.

I heard a British comic comment that you can say one good thing about Adolf Hitler – Adolf Hitler killed Hitler.

The whole democratic party is responsible for Jim Crow, so there.

Well, it’s Princeton and NJ after all. Progressives love their champion.

What were MLK’s views on homosexuality? Can we start pulling his name off of everything?

He was a philanderer.