When No One Came to This 10-Year-Old’s Birthday Party, State Troopers Surprised Him

When No One Came to This 10-Year-Old’s Birthday Party, State Troopers Surprised Him 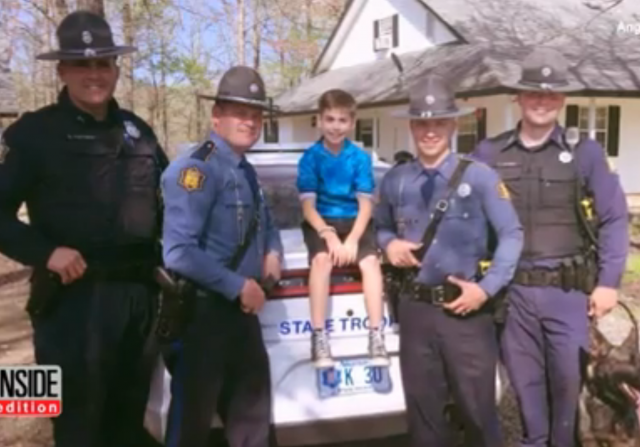 I loves stories of law enforcement going out of their way to serve and this particular tale has ALL the feels.

When none of his 21 classmates showed to up ten-year-old Toxey’s birthday party, Arkansas State Trooper’s threw him a surprise get together he won’t soon forget.

They came with gifts, a cookie cake, and an official State Trooper badge.

Inside Edition has the story:

Ten-year-old Toxey sent birthday party invitations to all 21 of his classmates. When the big day came earlier this month, no one showed up — not even the one boy who promised he would be there.

His mom Angela Andrews was heartbroken by her son’s disappointment, and wrote on Facebook: “for the second year in a row, no one has come, no one. It is absolutely heartbreaking watching him watch out the window all night for people to arrive and watch him cry when no one comes.”

Andrews told InsideEdition.com that she “just wanted to get a plea out there to parents to please consider taking their children to parties they are invited to because it broke my heart seeing him so upset.”

“They had other things they had to do,” the 10-year-old from Hot Springs Village speculated.

But the disappointment soon wore off. Two days later, Arkansas State Troopers knocked on their door, bearing a birthday surprise for the boy.

According to Toxey, they opened the door to Corporal David Forthman and Troopers Terry Sawyer, Kyle Sheldon, Brandon Cook and Tim Callison holding out a giant cookie cake, wishing him happy birthday.

They came bearing gifts, and his mom captured him opening boxes, and revealing a yo-yo, Frisbee, Lego set, as well as various other gifts.

“It made me feel very happy that the police came to my house and brought me all those nice things,” Toxey told IE.com, “and especially that they played with me.”

“It was amazing and unexpected,” said Toxey, who told IE.com that he is a big fan of cops.

The State Troopers chronicled the birthday party on their Facebook page:

The Law as required, as needed, as wanted.

Cops often see kids in pain but it is not often that they get an opportunity to make some of it go away. He will remember this birthday for the rest of his life. Thank you ASTs.

You know, Hillary Clinton does photo ops like this too. Posing with kids is PR, not expiation.

Or, you know, maybe they decided to make one kid happy.

WTF is wrong with you?

“…ANDREWS even recorded the five state troopers letting her son play in the Rhino SUV, normally used in police pursuits, play fetch with the K-9 police dog, and test out the different sirens in the patrol cars…”