Want to Honor a WWII Vet? Here’s How

Want to Honor a WWII Vet? Here’s How

Can you spare three minutes? 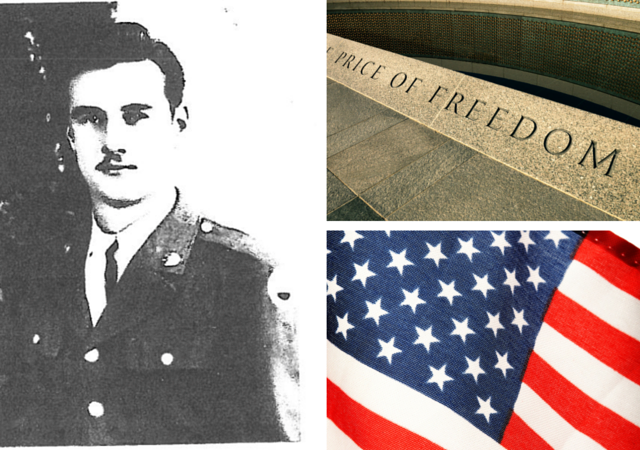 Corporal Daniel A. Miller will be headed to Washington, D.C. on an Honor Flight next week. He served in the Pacific theatre during World War II as a TEC 5. Three of his now-late brothers also fought in World War II, though Corporal Miller is the last of his thirteen siblings still with us.

Honor Flight is an incredible program. It’s “non-profit organization created solely to honor America’s veterans for all their sacrifices. We transport our heroes to Washington, D.C. to visit and reflect at their memorials.” More than 20,000 veterans were flown in to their memorials last year alone.

His great-grandson, Joshua Perry, is asking anyone who feels compelled to do so send Corporal Miller a short note, which he’ll receive on his honor flight, April 16.

Thank you so much for being willing to write to my great grandfather, Daniel Miller, during his Honor Flight. One of my favorite things to do when I lived on the Hill was greet the Honor Flights as they arrived to visit their memorials, and I really wish I were able to be there for him.

He’ll arrive in Washington, D.C. on April 16th, so if you’d be willing to write a letter and mail it in advance, they’ll be given to him during the flight.

In the other document found in this folder there is a form on which you can write a note him (beneath).

Then all you have to do is put it in an envelope and mail it to:

In addition to letters on the above form, you can also mail postcards to the address above and just note that it is for Daniel Miller’s Honor Flight.

Thank you so much for being willing to make my great grandfather’s trip extra special. I know it will mean the world to him!

The long-form you can print is here:

It’s a small gesture that could make all the difference to one of the few lasting members of The Greatest Generation.

I offered to take my late Father-in-Law up to the WWII memorial, but he didn’t want to go. I think that’s typical of most WWII vets. He wouldn’t even talk about his experiences “over there”. I know he was shot in the leg and laid out in a field for a couple days until friendly forces found him. He was awarded a purple heart and missed the Battle of the Bulge due to being in the hospital. Most of his outfit was wiped out in that battle.

For the last 10 years before he died, I took my father to annual reunions for those who served on the USS Yorktown CV-5 and CV-10, the latter being moored in Charleston harbor as a museum. Holy crap, it was a riot. On the USS Yorktown in the South Pacific theater during WWII, there’d be about 2500 sailors manning the aircraft carrier with a small contingent of perhaps 80-100 Marines, of which my father was one, on both the CV-5, sunk in 1942, and the CV-10.

At the reunions we attended from roughly 1993-2003, the number of old Marines present never numbered more than 20-25 among thousands of vet sailors. But those Marines got drunker and rowdier than all the seamen combined, and I acted as a sort of bouncer/lawyer/rabbi for the group, trying to keep them from fighting, brawling, tearing up motel rooms and the like. Back home, these were ordinary granddads, but for these reunions, hell no, they were all 19 years old again, if only for the week. I bailed out on average 3-4 of them per year (the local po-po LOVED these guys, and greased the skids, so it wasn’t that hard, with magistrates granting ‘hold till sober/released uncharged’ or releasing them to my custody). By 2003 I was almost 50 years old myself and came to love/fear/love these reunions. Generally, it is not a good idea to mess with any Marine, but WWII Marines? Holy crap. These were some very, very tough old veterans. SEMPER FI, dad.

Beautiful story, Henry. I appreciate your dad’s service and you taking care of them during their party reunions.

We were just in Charleston and saw the Yorktown. FYI, they will be taking that old sub docked next to the Yorktown out and scuttling her to become a reef either later this year or next year, so if you’ve ever had a desire to board, you’d better hurry down there.

I sent off a letter to Mr. Miller tonight. What I would give to be able to send a letter to my grandfather, also a WWII veteran.

A few years ago, we took our daughter to DC for her birthday. First stop was the WWII Memorial. Lucky for us, an Honor Flight contingent was there. It was a living history lesson for our daughter–to see IN PERSON those the memorial honors! She was floored. I still get chills just thinking about it.

My wife’s grandfather is an old Navy guy from WWII who has been active in the local veterans organization the past 50 years. He went on an Honor Flight to DC a couple years ago. His highlight was having an active duty Marine in dress blues escort him around in his wheelchair all day. That just tickled him, probably more than the memorial. He still brags about it to this day 🙂

Last fall we took my dad, a B-24 pilot to the Wings of Freedom event where they had a B-24, B-25, P-51, and a few other restored (flying) WWII aircraft. There were about a dozen other vets there at that time and he had some long conversations. It was pretty cool.

Kemberlee, I tried to print the form for my husband, who is a vet, to send. I felt it would mean more to Cpl. Miller to receive the letter from another vet.

The form involves a download and sign-up to SCRIBD before you can download and print. Just trying to print the form off my desktop did not work – just got 4 pages of app lists and junk advertising.

Can you or Josh Perry not come up with a different format/platform for printing this? The last thing I think you want to do is annoy people who want to make the effort as requested. My husband has his message prepared and will simply send the letter to the address in your post if not, but please let us know. Time is short.

So much for the three minutes, eh?