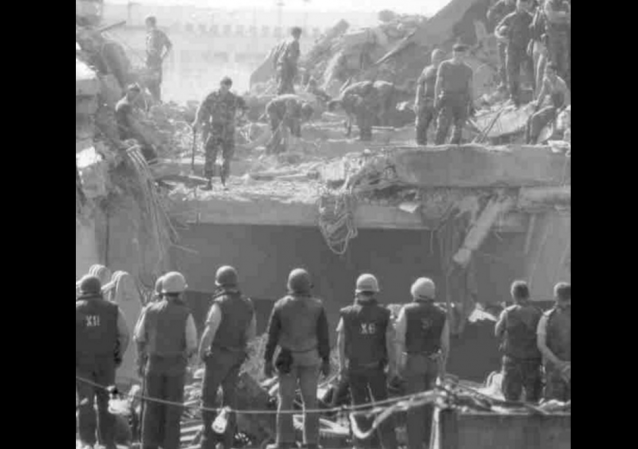 I guess I knew this case was percolating through the system, but I didn’t pay much attention to it.

The Supreme Court upheld a law which paved the way for terror victims to recover damages from Iran. The Opinion is here.

The legal issue was not terrorism, but whether Congress exceeded its authority. Here’s the opening of Justice Ginsburg’s majority opinion:

A provision of the Iran Threat Reduction and Syria Human Rights Act of 2012, 22 U. S. C. §8772, makes available for postjudgment execution a set of assets held at a New York bank for Bank Markazi, the Central Bank of Iran. The assets would partially satisfy judgments gained in separate actions by over 1,000 victims of terrorist acts sponsored by Iran. The judgments remain unpaid. Section 8772 is an unusual statute: It designates a particular set of assets and renders them available to satisfy the liability and damages judgments underlying a onsolidated enforcement proceeding that the statute identifies by the District Court’s docket number. The question raised by petitioner Bank Markazi: Does §8772 violate the separation
of powers by purporting to change the law for, and directing a particular result in, a single pending case?

Section 8772, we hold, does not transgress constraints placed on Congress and the President by the Constitution….

In a 6-to-2 decision, the court said Congress had not exceeded its constitutional role in enacting a statute to make it easier for the plaintiffs to recover damages that had been awarded to them in a series of lawsuits.

The cases were brought by the families of Americans killed in terrorist attacks found to have been sponsored by Iran, including relatives of those who died in the 1983 Marine Corps barracks bombing in Lebanon. That attack killed 241 servicemen.

The plaintiffs sought to collect frozen funds from Bank Markazi, Iran’s central bank, relying on a 2012 federal law, the Iran Threat Reduction and Syria Human Rights Act, that made the task easier by specifying assets of the bank that could satisfy the plaintiffs’ judgments. The law was quite specific, naming a single, pending consolidated case by caption and docket number.

That specification of a particular pending case — effectively changing the procedural rules midway — was the key legal issue.

Imagine your neighbor sues you, claiming that your fence is on his property. His evidence is a letter from the previous owner of your home, accepting your neighbor’s version of the facts. Your defense is an official county map, which under state law establishes the boundaries of your land. The map shows the fence on your side of the property line. You also argue that your neighbor’s claim is
six months outside the statute of limitations.

Now imagine that while the lawsuit is pending, your neighbor persuades the legislature to enact a new statute. The new statute provides that for your case, and your case alone, a letter from one neighbor to another is conclusive of property boundaries, and the statute of limitations is one year longer. Your neighbor wins. Who would you say decided your case: the legislature, which targeted your specific case and eliminated your specific defenses so as to ensure your neighbor’s victory, or the court, which presided over the fait accompli?

That question lies at the root of the case the Court confronts today. …

There has never been anything like §8772 before. Neither the majority nor respondents have identified another statute that changed the law for a pending case in an outcome-determinative way and explicitly limited its effect to particular judicial proceedings….

It’s said that bad facts make bad law. There are bad facts here — Iranian terror — and it may have made bad law. It does seem like the rules were switched mid-case. Good for the victims, maybe not so good for some future litigant who earns the ire of Congress.

I would guess that it would be much easier to collect if we had kept the Iranian funds “frozen”, but that is just me…..

So is this a “Bill of Attainder”, forbidden by Article I, Section 8?

No. A bill of Attainder is a legislative punishment (often without trial) imposed by the legislature directly. Here, the Legislature simply changed the rules in regard to federal civil procedure and what constitutes a valid claim, and made those rules retroactive. Again: difference between a criminal claim (punishable by the state) which would be forbidden and a civil claim, were the Legislature is allowing a private party to sue another private party for damages which were suffered by the claimant.

As the Prof. said: good for these plaintiffs and bad for the Iranians, but likely bad for some future US defendant where the stakes are high enough to earn the attention of Congress and “something has to be done.”