Throwing a fit may work, it has elsewhere 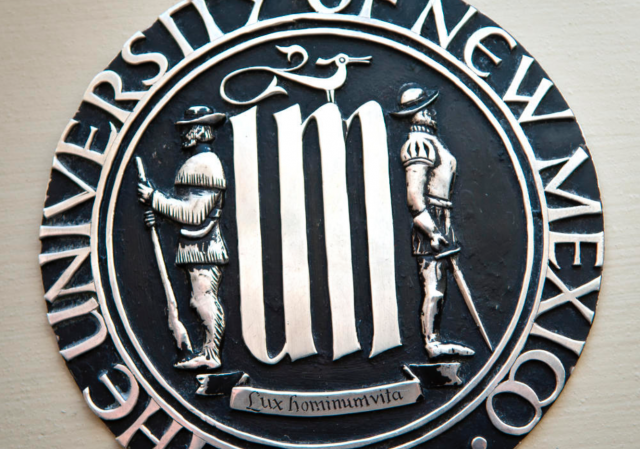 We have a new contender in the nationwide contest for Most Ridiculous Student Protest — University of New Mexico.

Native American students at UNM have decided the university seal is offensive because it bears a conquistador and a frontiersman. They argue, “it glorifies the violent European treatment of natives.”

Or, it could be part of you know, history. But these days, all history is racist.

According to the Albuquerque Journal:

The protesters want the seal – whose roots can be traced to the university’s fourth president, Edward Dundas McQueen Gray, and was most recently updated in 1969 – relegated to the dustbin of history.

They have gone so far as to design a protest version with a conquistador and frontiersman standing atop a mountain of skulls and ribcages with the current seal in the background. Red capital letters superimposed on the image read, “What Indians?”

UNM President Bob Frank said many people are attached to the seal, given its long history, but that he’s open to hearing the students’ rationale for changing it.

“It’s a seal I have always known,” said Frank, who earned several degrees from UNM in the 1970s. “I certainly understand that people may have different points of view. If they want to talk about it, I am open to the conversation.”

The protest seal is the creation of Nick Estes, a doctoral student and a member of the Oceti Sakowin tribe in South Dakota. He and others say the current seal is emblematic of deeper-seated racism at UNM.

“I saw it, and I was like, ‘Is this really true?’ ” Estes said at a planning meeting of students and others looking to abolish the seal. “This is my interpretation of what that actually means. I actually couldn’t believe it. I didn’t actually think that this was a real thing that the University of New Mexico would be doing.”

A group called Red Nation is on the case, passing out modified flyers in an attempt to shock people into seeing the error of the UNM seal’s ways. 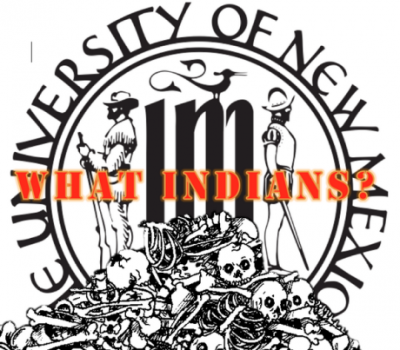 They might be protesting, but to date, Red Nation has yet to initiate a formal complaint to get the Change the Seal ball rolling.

“This is the stamp that legitimizes it all,” sophomore Jennifer Marley said. “For people who don’t understand why the seal is offensive, it’s the depiction of a conquistador and a frontiersman and the celebration of deep colonial violence.”

Marley is a member of The Red Nation. It’s a Native American led activist coalition that was established in 2014 and is based in Albuquerque and Gallup.

Many of its members attend UNM, including its founder, Nick Estes.

Estes is the person who tweaked the seal so the conquistador is now atop a mountain of skeletal remains, with the caption “What Indians?” The group made flyers and passed them out to students during the Indigenous Book Festival.

The group said the flyer is meant to be a bold statement, and people on campus agree.

“Sometimes you have to shock people in order to get them to realize how offensive something can be perceived,” Michael Wray said.

Estes said that’s the group’s mission and they won’t give up. The group has already had conversations with UNM’s Office of Equity and Inclusion.

However, according to UNM policy, the seal can’t be changed unless the group goes through the board of regents. The university said it hasn’t received any official requests to ditch the seal.

Just imagine the outcry if the seal was etched in chalk…

Could be replaced with image of one Indian Tribe hacking another Tribe.

It is a good thing that life on the Navajo reservation is so luxurious that these kiddies can protest something really important like an emblem. smh

Someone should remind these protestors that there are always consequences to LOSING military engagements.

snark on
Do you get off on being mean and racist like that?
snark off

Of course. History has consequences. Losing sides suffer their lumps.

Not sure if it applies in New Mexico area, but if I recall my (watch it — trigger word coming) history, there were plenty of “natives” who joined forces with the Spanish invaders in the conquest of Mexico to destroy the Aztecs.

When Cortez landed he had 150 troops. By the time he got to Mexico City he had 15,000. The Aztecs were so evil that other groups were glad to rally behind the Spanish.

The Conquistadors also brought Christianity, a highly civilizing influence. The Aztecs were sacrificing around 15-20 thousand people a year. Some of the Spanish were going to make slaves of the native Americans. One of the priests confronted the generals, and informed him that his priests would deny the Sacraments to all involved in slavery, and they would burn in Hell. They stopped with the slavery.

There’s an old “joke” in the New Mexico/Arizona area, “How many Apache can hide in this room? As many as wants too.” There could well be dozens of Apache on that seal.

Yet the genocide, slavery, murder, and rape committed by their “native” predecessors win plaudits and awards. It could only be the braying of members in the State-established pro-choice church.

*sssiiiigggghhhh* Can Scotty beam me up now? There’s no intelligent life on earth anymore.

Too late, you’re being assimilated by the prog borg.

Eh, more of the same in the fight for Hispanic vs Indian supremacy. This kind of stuff has been going on for years.

Our small town has a Fiestas parade every year. The first year I was here I watched in interest as the Pueblo Indians followed the Conquistadors in the parade route. I thought at the time it would have been awesome if they both stopped and threw down in the middle of the street. Unfortunately, they all just waved at the crowd and went on their way.

But wait! How about the man wearing a buckskin outfit? That means he killed some poor animal and then had the nerve to skin it and wear it’s hide! I say use an artichoke on one side and a tampon on the other.

I propose that the Texas/New Mexico border be moved west to a point just west of Roswell to free the good people of eastern New Mexico from oppression.

As a UNM grad, I’d suggest everyone calm down, head over to the SUB and have a Chick Fil A sandwich.