On the campaign trail in Buffalo, New York Monday night, Donald Trump mistakenly referred to the convenience store 7-Eleven in place of the 9/11 terrorist attacks.

From the AP wire:

Donald Trump made an unfortunate slip-of-the-tongue while campaigning in Buffalo, New York, on Monday evening at his final rally before Tuesday’s big-prize primary.

Trump was about to deliver prepared remarks lauding New York values when he mistakenly mentioned the name of a popular convenience store chain in place of 9/11.

“It’s very close to my heart because I was down there, and I watched our police and our firemen down at 7/11, down at the World Trade Center right after it came down, and I saw the greatest people I’ve ever seen in action,” Trump told the crowd.

Trump has repeatedly invoked the September 11 attacks as he’s campaigned across his home state.

He paid his first visit to the National September 11 Memorial & Museum earlier this month. 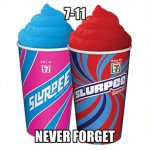 Stupid mistake of the sort which every candidate for President will make a few in the course of a campaign. It hardly damns Trump, but neither does it help him shed his patina of unseriousness.

Yet this sort of civilized consideration is never reciprocated by Trumpkins. I say we beat them over the head with it.

Pretty funny gaffe, but I’m still waiting for a big, hearty “BBBYYYYAAAAWWWW!” Maybe then he would finally go away forever.

There are substantive reasons to oppose Trump, but this type of thing could hurt him with some of his less educated supporters.

So basically all of them, then. He loves the poorly educated. Easier to fool with his constant bs.

So should we assume that you’re voting for the Natural Born Canadian?

I already did, but my vote didn’t count because it’s a winner take all state. Trump got all the delegates. I was disenfranchised, dammit!!!! It’s a rigged system. Democracy, constitution and stuff!!!!

The sense of entitlement is strong among Trolls for Trump. They don’t think it was undemocratic for their secular messiah to take 100% of the delegates with less than 40% of the votes cast. But Trolls for Trump love to claim it is unfair and undemocratic of Cruz to use well established rules to place people loyal to him in delegate slots through the party caucus process- a process they generally didn’t bother to participate in.

And Rosie O’Donnell flung her yuge, skid marked shorts upon the stage in solidarity with Trump!

Aw, geez! That was painful. Make it go away.

There was an eleven in there somewhere. Close enough. His adoring fans don’t require anything more than half-assed accuracy, so there’s no real harm done here. Sprinkle some pixie dust and move on.

Michelle Malkin just shared her 2006 story about the events at a particular 7-Eleven next to the Pentagon leading up to the murder of almost 3,000 Americans & visitors on September 11, 2001.

Slips of the tongue aside, there IS a 9/11 – 7-Eleven connection that too many Americans have forgotten==>

Let your heart not be troubled, Merlin. You know all that stuff Reagan couldn’t manage to do? You know, like shrink government? Cruzz’ll do all that. Yep. America’s back, baybee, yeeeaaahhh!

I am sure the citizens of our 57 states will get a chuckle.

Just another anti-Trump piece on this biased site, right fellas?

Where on earth can Trump get some favorable media treatment? It’s so stacked against him, and unfair.

/s for the slow

I have to admit it can be fun to troll Trump supporters on a slow news day. I’ve never seen a more thin skinned group of people outside the SJW’s.

Thin-skinned they are, but the worst part is how nasty & vulgar they are to any criticism, however factually based & justified. They are just like the Brownshirts.

Another Trump aide issued a call to supporters to physically block Wyoming & Nebraska delegates from getting to the convention, including blocking highways or confronting them, cancelling their airline and/or hotel reservations, “any legal means necessary” (although these described are not strictly legal). When is it permissible to call them what they are?

Wow, how low will you stoop to find feces to fling at Donald Trump?

I apologize for thinking you had standards here; I was wrong.

I love the smell of cruzbot desperation in the morning.

Gary Britt – “I love the smell of cruzbot desperation in the morning.”

This is perhaps the pettiest oppo meme of the entire primary cycle so far.

I was watching a live stream of Don speaking yesterday when he got tongue-tied.

Talk about scraping the bottom of the oppo meme barrel…

Self-Aware Much, #NeverTrumpers Who Will Vote For Hillary?

VV: With all due respect, which is not much, your post epitomizes selective thinking:
First you claim that laughing about Trump’s own words is a petty “oppo meme”, which you then immediately follow with ascribing your own meaning to other words that Cruz used.
That type of selective thinking is one reason why no-one cares about what you think.
Please respond with insults.

Since you don’t care what I think, I would expect no more replies from you, Ranger RICK.

But you are an instructive exhibit.

So you’re saying that mocking Obama for his fifty-seven states gaffe is out of bounds? Trump committed a mockable gaffe. The reason that he did so is because he’s human, and the gaffe is understandable, but no less mockable for its normality.

Not to be confused with Cruz’s values comment which was quite intentional, although unwise in retrospect.

Well it is a pretty easy mistake since both are staffed by Muslims.

The FAA is an “oppo meme” now? Did the little Trumpkin learn a new phrase? So cute!

Tell us again what you’ll do when ihr Führer doesn’t get the nomination! Love to hear the empty threats from idiots!

It’s not about the man. It’s about the GOPe, Cruzstapo Boy.

Any rule to which Trump objects is, by definition, objectionable, and it is a scurrilous dirty trick to point out any failure of Trump to follow any such rule.

is that the same aircraft Der Donald was busted trying to sneak out of a hanger when he was in one of his bankruptcies, so he could beat the fees owed?

Or is it one he bought since?

Oh? When did Don acquire a commercial pilot’s license to fly his airplanes?

Oh… you must be talking about Don’s foray into the airline business, not him personally.

“Timing is everything in business, and unfortunately for Trump he entered the airline game at the wrong time. The US entered an economic recession in the late-‘80’s leading many corporations to cut back on business travel. In addition, tensions in the Middle East leading up to the first Gulf war caused oil prices to spike. This 1-2 punch was devastating for the airline industry and led to the demise of a number of airlines including Eastern and Pan Am. Given these circumstances, the Trump Shuttle lost money, and with Trump continuing to accumulate debt in his other ventures it was becoming increasingly difficult to pay back the loans taken to purchase the airline.”

the rest is here: http://www.nycaviation.com/2015/07/one-time-donald-trump-owned-airline/

VF Cruzbots don’t understand economics and facts. You are going to cause them to overheat.

Trump bought the shuttle routes when Eastern (I think) went out of business but he wasn’t able to save them from the effects you cited.

He was going to make the shuttle routes a winner, but it did not work out.
But he’ll turn America around, for sure.

“Trump bought the shuttle routes when Eastern (I think) went out of business but he wasn’t able to save them from the effects you cited.”

To hear Rags tell it, Don is unsuccessful.

I’m a smart guy who says a dumb thing every day so I don’t hold it against him. Although they’re usually not this funny.

He’s only off by 2. That’s 20 trillion dollars less than his nearest competitors and about one hundred million bodies or clumps of cells less by other counts.

That said, he never claimed to be “the best and brightest” or wannabe counterparts with their gaffe-filled public statements.

Exit polls in New York, 26% of repubs wouldn’t vote for Trump. 41% wouldn’t ever vote for Cruz.

Largest block of pubs believe Trump has best chance to win in November.

60% of pubs want outsider (one that they don’t hate and who understands New York Values would be my guess).

More than seven in 10 New York GOP voters in preliminary exit poll results say the candidate with the most votes in the primaries should win the party’s nomination; a quarter instead favors a contested convention, saying that delegates should pick whichever nominee they think best.

Of course they do, Britt.

Only The #NeverTrump Hillary Voters side with the GOPe, b/c love the establishment.

Cruz sends out whiny plea for money and support complaining about how hard it is to run for President.

Among his complaints “cuts into his mistress time”.

That will be a growing trend.

Get back to me when he starts bragging about the Nittaly Lions, Cominskey Park, Cinco de Quatro, starts speaking Austrian, campaigns in all 57 states, extols the virtues of our inter-continental railroad, or if, God forbid he starts having an asthma attack, grabs the nearest breathalyzer.

Who? That depends on who you support, Lancemen.

Listen, don’t take it personally. You have friends here who will counter weight that.

I’m only one man. And many of my former pals from HotAir are here. Many of us were/are Trumpanzees. Not Robespierre. He prolly loves it over there now. All of us were run off with the commenting system now.

Right, Lanceman. Saw the typo after it was posted.

Yeah, that was sad; I used to go to HA not for the articles, which I generally disagreed with or thought were squishy, but just to read the comments.

That was one great comment thread! Wonderful plays on words, classical references, sometimes it was pure magic.

All gone now. God, I hate “progress” sometimes (and “progressives” all the time!)

Anyway, good to see you here! But “Trumpanzees” (I like that word!) are an endangered species here, so be warned!

No blog had a better commenting system. The registrations were few and far between. Kept the trolls to a minimum.
But all us Trumpanzees (and there are plenty) migrated over to hotgas.net, a blog started by several of the regulars there. Now all the blurbs are written by former HotAir regulars such as Constantine XI, Doomberg, NWConservative, Kingsjester and a few others. The commenting is Disqus, but at least we’re all in one place again.

I gave Hotgas a fair shake, but it’s a Trump echo chamber, which is intolerably insufferable. The site is run by the most offensive of the posters from HotAir, and they consider their lack of impartiality to be a feature. Here, as in the real-world right, Trump detractors outnumber Trump supporters about two-to-one.

Or Hillary Clinton, who would steal everything in 7/11 if no one was looking, or Barack Obama, who actually doesn’t know there are 50 states?