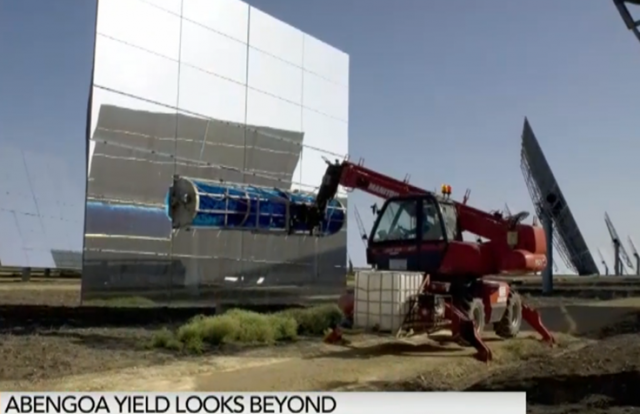 When his second term comes to its inevitable conclusion, the final list of President Obama’s policy failures will be ponderous.

And few items on this list will place higher than his “Green Energy Initiatives.”

One of his gandest schemes involved backing Solyndra LLC, a solar-panel maker. Presidential aides pressured White House budget officials to complete a review of a $535 million U.S. loan guarantee to the firm, which subsequently filed for bankruptcy protection.

Abengoa is a Spanish company that was another of President Obama’s personally picked green energy projects, and it’s now on the verge of bankruptcy too, potentially saddling taxpayers with a multibillion-dollar tab and fueling the notion that the administration repeatedly gambles on losers in the energy sector.

The renewable energy firm, which is constructing several large-scale solar power projects in the U.S. and has received at least $2.7 billion in federal loan guarantees since 2010, said Wednesday it will begin insolvency proceedings, a technical first step toward a possible bankruptcy.

…Abengoa’s looming demise is eerily reminiscent of the fall of solar power firm Solyndra in 2011, a colossal failure of government investment that left taxpayers on the hook for more than $530 million.

A potential Abengoa bankruptcy could be much worse for taxpayers, although it’s unclear how much of the guaranteed loans the company has paid back. Neither the White House nor the Energy Department responded to requests for comment Wednesday seeking information on how much the company still owes on the loans, for which the federal government might be left on the hook.

Now, a U.S. judge has given the Spanish firm bankruptcy protection under American law.

Judge Kevin Carey of the U.S. Bankruptcy Court in Wilmington, Del., on Thursday agreed to preliminarily shield Abengoa SA and a host of affiliates from any creditor actions in the U.S., extending a protection that Abengoa has already secured from a Spanish court.

Abengoa this week sought protection under chapter 15 of the U.S. bankruptcy code, which is available to foreign companies, after 75% of its financial creditors signed on to a standstill agreement that gives Abengoa until the end of October to reach a comprehensive restructuring agreement without the threat of its creditors interfering with those efforts.

“That leaves an unknown 25% out there that we’re not sure what they’re doing or what they’re thinking,” Abengoa lawyer Craig Martin said at Thursday’s hearing.

…Court papers show Abengoa’s debt load tops €14.6 billion ($16.6 billion). Abengoa, which operates around the world, is hoping in its restructuring to cut costs, shed noncore assets and emerge as a slimmer business valued at €5.395 billion with €4.9 billion in debt.

The loans primarily went to building the Solana solar plant in Arizona and the Mojave Solar Project in California. There is some question as to whether rate-paying energy users in these regions would be impacted by the developments.

“This (Abegona’s financial situation) has no impact on ratepayers,” Jenna Shaver said. “We have no investment in the plant itself.”

Officials at Pacific Gas and Electric Company in California were more guarded in their remarks.

In an email exchange with Watchdog.org, Denny Boyles, external Communications representative at PG&E, said the company has a 25-year power purchase agreement to pay for power supplied by the Mojave Solar Project, but he didn’t say whether ratepayers could face any financial exposure in case of an Abengoa bankruptcy.

Hopefully, the next President will pull the plug on future green energy schemes. Taxpayers are running out of the money to fuel them.

We’re $29 trillion dollars in debt, with hundreds of trillions more in unfunded liabilities.

We never had the money to fuel these ludicrous lefty wet dreams.

That argument applies to every federal expense. In my mind it is fair to say we are compelled to spend in certain areas – say defense as an obvious one. But of the trillions we do spend, there are plenty of “programs” competing with green energy for dream status. (Meaning achieving the intended results is a dream.) But the money flows, no matter which letter controls the purse, R or D.

Back before the Obama Administration, a panel compiled the balance sheet for the US government.

* includes all land and buildings in the US

The spenders never run out of our money.

Can we generate electricity by burning money?

It isn’t that green energy initiatives categorically fail. The real problem is this administration has chosen some spectacularly bad ones to pour a tremendous amount of cash into. Even venture capitalists know that the more any single operation needs to leverage it over a hump to solvency, the higher the risk. By a big margin. That’s why most work hard to balance their portfolio with a lot of smaller investments for every one high risk massive investment. Perhaps another factor beside “investments smarts” that makes VCs different is cronyism, too. The feds have a much harder time making financially wise decisions when failure has few repercussions. So cronyism is rampant.

If they were good investments they would not need government backing.

No, the real problem is that the federal government shouldn’t be interfering in the free market at all.

Congress is laughing in your face. What are you going to do about it. Nothing.

Without subsidies NO green energy company can or has survived. No green anything but grass can survive without government help. This is supposed to be a capitalist nation that rewards innovation and efficiency but not in the green world. There, success is measured by the subsidy amount. Tesla motors is a good example of a company that will not survive without subsidies and carbon tax credits. If it does survive it will be because they offered a product that is superior to similar products that the public buys in quantity. Ted Cruz is right when he advocates no government subsidies for any private company.

Tesla might survive if they play their cards (and their market) right. The key is to either build a “decent enough” product at a low price point (compared to the general market), or build an excellent product at an “affordable” price point (for some definition of “affordable”).

Likewise, “green energy” could be a winner, if government would stop interfering and let real innovation take over and improve the product. For starters, overhead cost needs to improve, then reliability and efficiency. But no innovation will happen as long as the government is willing to subsidize and/or mandate absolute crap.

The most important point in a capitalist economy is to let the market decide a product’s value. The government should not be in the business of picking winners and losers.

“One has to free oneself from the illusion that international climate policy is environmental policy. This has almost nothing to do with the environmental policy anymore, with problems such as deforestation or the ozone hole,” said Edenhofer, who co-chaired the U.N.’s Intergovernmental Panel on Climate Change working group on Mitigation of Climate Change from 2008 to 2015.

For those who want to believe that maybe Edenhofer just misspoke and doesn’t really mean that, consider that a little more than five years ago he also said that “the next world climate summit in Cancun is actually an economy summit during which the distribution of the world’s resources will be negotiated.”
——-
“This is probably the most difficult task we have ever given ourselves, which is to intentionally transform the economic development model for the first time in human history.”

The plan is to allow Third World countries to emit as much carbon dioxide as they wish — because, as Edenhofer said, “in order to get rich one has to burn coal, oil or gas” — while at the same time restricting emissions in advanced nations. This will, of course, choke economic growth in developed nations, but they deserve that fate as they “have basically expropriated the atmosphere of the world community,” he said.

They always have all these wonderful ideas, always about spending other people’s money.
And then things go wrong and it’s never, ever, ever, their fault. And don’t you dare to “told you so” them, because that will, somehow, make you a racist.

So much for ‘Solar is free’.

First, the government will never “pull the plug” on green energy schemes as long as they’re losing other people’s money.

Second, regarding Abengoa specifically, they got $2.7 BILLION to build two power plants? That’s what, $1.3 BILLION per plant? At current energy prices, the “break even” return on investment timeline on those must have been measured in decades. (The only other option I see is that consumers would be hit with a sizable rate increase for their “low-cost solar energy”.)

Relatedly, would it be legal for a U.S. judge to put exceptions in bankruptcy protections? Something like, “You are granted protections for all your debts, except those owed to U.S. taxpayers“?

No offense, but what makes you think they take ROI estimates and other legitimate financial considerations into account? This has nothing to do with business, markets, or the like. It’s about rewarding political cronies, kickbacks, and appeasing political blocs.

The speed with which some of these “green investments” by the government went bankrupt suggest to me that they were intended as payoffs.

The truth is in any of these debacles no one has any idea how much the government has tied up in them. Run an audit? How do you audit pixie dust & B. S.?

This is why the founding fathers gave 8 enumerated powers to the feds.

Just to add insult to injury, they will scrap out the projects entirely rather than allow any standard liquidation.
Those that are demolishing the projects will be charging full rate.
And that money comes out of thin air.

With China closing their doors to “green” industry and their environmentalist lobbies, it is the end of an era with non-renewable “green” technology and a reevaluation of renewable, intermittent natural drivers.

That said, while the merits and character of “green” technology have been grossly misrepresented, they should still be evaluated in a basket of energy producing or converting technologies in context.

Think the FBI will investigate? Oh, that’s right, they investigated Solyndra and concluded they lied to get their loan. No prosecution though. No one goes to jail. Obama’s happy. He got his kickback.
How about all those Obamacare co-ops that failed? The best is failure of Health Republic run by his old friend Sarah Horowitz. Google scrubbed their relationship. Good old Sarah sits on the Board of Directors of the New York Federal Reserve. Wow.

Chavez was a piker compared to this guy.