Thanks to Schwarzenegger, killer released from prison early

Thanks to Schwarzenegger, killer released from prison early

Son of Fabian Nuñez, who is former Assembly speaker and political ally of former Governor, is out after serving shortened sentence. 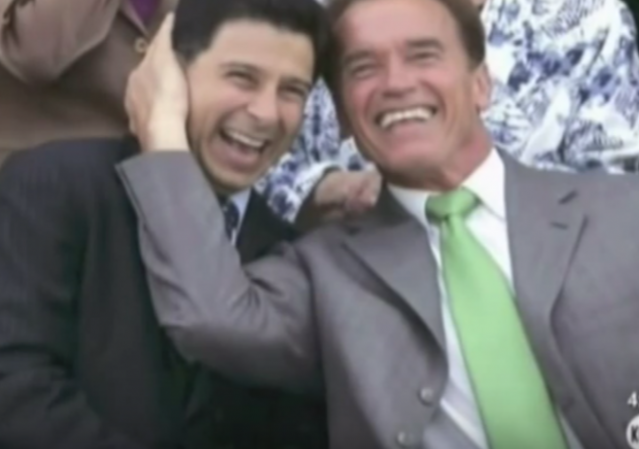 If the list “Best California Governors” is ever created, our current one has a better shot at making the cut than Arnold Schwarzenegger.

Schwarzenegger began his time in office with record high approval ratings (89% in December 2003), he left office with a record low 23% in 2011, only one percent higher than that of Gray Davis’s when he was recalled. The reasons for the plummeting approval are many, but ultimately stem from selling himself as a conservative but abandoning these principles after important citizen-backed control measures were defeated because of union shenanigans.

Californians might have forgiven him for bad politics, but one of his final acts as Governor was utterly disgraceful and unforgivable.

The son of a former California state Assembly speaker has been freed from prison after his manslaughter sentence was dramatically reduced in 2011 by then-Gov. Arnold Schwarzenegger, prison officials said Sunday.

The California Department of Corrections and Rehabilitation said Esteban Nuñez, now 27, will live in Sacramento County on parole supervision for three years.

Nuñez entered prison in June 2010 to serve a 16-year sentence in the stabbing death of college student Luis Santos in San Diego.
n his last day in office in 2011, Schwarzenegger commuted the sentence to seven years. Nuñez is the son of Fabian Nuñez, who was speaker of the state Assembly and a political ally while Schwarzenegger was governor.

Prosecutors in the case asserted that a group of four men, which included Nuñez went “looking for a fight” after they were kicked out of a fraternity party. Bruce Henderson, the father of another of young man attacked by the Nunez gang, explains what happened next:

…Upset at being barred entry to a fraternity party, they went to the apartment of one of their cousins, where they downed spiced rum and beers. “Faggot frat guys. Let’s go burn down their house.” They talked of beating up people, even killing someone. They had brought along knives.

Luis called his friends and said he and Brandon were about to get jumped. Evan, Keith, and Jason ran that way, and came upon a fleeing Luis. Four figures came from the opposite direction. As the two groups passed, Luis was dropped by a blow to the chest.

When Evan went to Luis’ aid he was pushed from behind. Not knowing he had been stabbed in the back, he spun around, and took a blow to the stomach.

When it was over, Keith had been stabbed in the shoulder, and Brandon had a fractured eye socket and orbital wall. Finally realizing he had been stabbed, Evan sat on the curb, took out his cellphone and dialed 911.

Luis, whose heart was severed by the blade, had collapsed under a large shrub.

Hours after returning to Sacramento later that day, the assailants learned on the Internet that someone had died. Esteban Nunez, 19, and Ryan Jett, 22, went to the Sacramento River, where they doused a pile of bloody clothing with gasoline and set it on fire, then threw their knives into the river. If necessary, Nunez said he would claim self-defense and see if his father could get him off. A few days later, Nunez sent a text message to one of the assailants: Gangster rap made us do it lol.

Schwarzenegger reduced the sentence from 16 years to just seven years, calling it “unfair” considering Esteban Nunez had no prior criminal record. San Diego District Attorney Bonnie Dumanis attempted to nullify the decision, but was unsuccessful.

The parents of the victim are heartbroken, and angry at the injustice:

The Santos family spoke at the a victims’ rights rally outside the state Capitol on Thursday.

“It’s been very hard,” she said. “This is the year he would be turning 30 years old. This year his friends are getting married and having children.”

His family was notified that Nunez would be released soon from prison.

“Again, there’s nothing we can do about the release of our friends’ murderer–in our case, we have seen first hand the difference between the haves and the have-nots,” Fred Santos said.

On Good Friday this year, Governor Jerry Brown issued 59 pardons, including one for actor Robert Downey, Jr. This list included those convicted of nonviolent, drug-related or property crimes.

Of all the horrible things Schwarzenegger did as governor, this may be the worst.

One has to wonder if the notoriously indiscriminate philanderer was blackmailed into this by Nunez.

Mailed this to my daughter, who lives in SoCal with husband & family. Wanted to remind her that while NO Dem can be trusted–ever!–too many Reps are scoundrels, too. What a mess this world is.

I’d pardon the parents if they were to go all “Man on Fire” over their loss. I’d probably send them a medal.

so sad ….
it is good to be friends with the king.
but ya know .. Karma is not kind ….
“be not deceived , GOD is not mocked, whatsoever
a man soweth that also shall he reapth.”
Galatians 6:7

This is not Equal Justice under law.

Schwarzenegger probably did this out of friendship, which is a form of corruption.

If this being Esteban Nunez’s first serious crime, and somewhat out of character, it not being the case that he went about murdering people every day, week, month or even year, was a reason, or is a reason, there must be others as well.

Nunez already got the benefit of this being considered manslaughter and not murder AND THAT WAS QUITE A LOT. It was clearly a deadly assault.

The only point in his favor is it is not clear who did the stabbing of Luis – maybe. Nunez admitted to stabbing Evan – a sthat in oorder to try to clear himself from stabbing Luis?

“Schwarzenegger probably did this out of friendship”

He admitted to doing exactly that. I can’t recall the exact quote, but it was something like “Yeah, politicians do favors for each other, that’s the way it is.”

Smarter and more prominent persons than I have made note of the similarities between celebri-conservative Ahnuld and celebri-conservative Trump. Among them: That neither has set their principles set in stone. They say what they need to say to convince the target electorate that they really are simpatico, and once installed, they take the oath of office, and they do what they want with whatever power they choose to exercise. Some of us observed that Schwarzenegger liked to say that people need to be told what to do, implying that he was the one to do it, and that this was not the way a conservative talked. While it was a bit too obvious to go Godwin on an Austrian immigrant, it was a signal that this was a person who would try to get away with whatever he could. And to “help out a friend” in Democrat bigwig Nunez, that is what Ahnuld did.

Such types of persons often reveal themselves when they have nothing left to lose. In 2012, termed-out Governor Haley Barbour of Mississippi exited his post by pardoning at least five convicted murderers, for reasons ranging between wanting to restore their rights to vote and hunt to because it is a tradition for the lame duck Governor to release prisoners assigned to work at his mansion. I’m not making that up.

Back to Ahnuld, though: As many keen observers may remember, when the California recall election swung the doors open to any idiot who wanted to run against Gray Davis, Sean Hannity gave his full-throated support to the screen star and political novice, vouching for his conservatism and insisting that he wasn’t shining us all on when he said he was for civil unions, but foursquare against same-sex marriage. Of course, we know how that turned out: Schwarzenegger the alleged conservative turned tail halfway through his first half-term to save his political posterior, and proved to be the RINO many of us insisted he was all along. As for his stance against SSM, this says it all.

And look who Sean Hannity’s sucking up to now. Everything old is new again.

Arnold turned out to be a real zero. He could have made history, instead of making it with his maid.
http://www.dailymail.co.uk/tvshowbiz/article-2210078/Arnold-Schwarzenegger-speaks-affair-maid.html

That said, he was still light years better than the California democrat loon who might have governed instead.

For all his faults, Gray Davis’ (whom Schwarzenegger replaced during the recall) attitude for killers was to parole them in a pine box.

That said, he was still light years better than the California democrat loon who might have governed instead.

No. He wasn’t. As I’ve explained on this site before, Schwarzenegger and fellow RINO Abel Maldonado converged to make a deal for their own personal interests, and the end result was open primaries with the two top vote-getters running off. This virtually guarantees that it will be at least a generation before another Republican can even dream about being elected to a statewide office.

The details are here. And in the case Donald Trump is somehow elected POTUS, it will destroy the Republican party forever.