Suicide on the rise in the US

Suicide on the rise in the US

Most demographic groups are affected 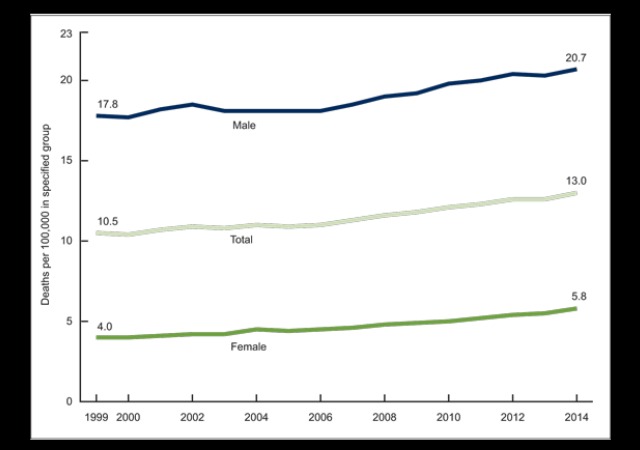 This is depressing news:

Suicide in the United States has surged to the highest levels in nearly 30 years, a federal data analysis has found, with increases in every age group except older adults. The rise was particularly steep for women. It was also substantial among middle-aged Americans, sending a signal of deep anguish from a group whose suicide rates had been stable or falling since the 1950s.

The suicide rate for middle-aged women, ages 45 to 64, jumped by 63 percent over the period of the study, while it rose by 43 percent for men in that age range, the sharpest increase for males of any age. The overall suicide rate rose by 24 percent from 1999 to 2014, according to the National Center for Health Statistics, which released the study on Friday

Those statistics are all about increase vs. decrease rather than absolute numbers, however. A caveat is that 1999, the start year, was a low year for suicides. But the rates have been steadily increasing since then, so it seems to be a real effect. The other thing I need to point out is that even though the rates among women increased more than among men, men have a much higher suicide rate than women:

There are theories about why this general increase is happening, although no one knows for sure:

The data analysis provided fresh evidence of suffering among white Americans. Recent research has highlighted the plight of less educated whites, showing surges in deaths from drug overdoses, suicides, liver disease and alcohol poisoning, particularly among those with a high school education or less. The new report did not break down suicide rates by education, but researchers who reviewed the analysis said the patterns in age and race were consistent with that recent research and painted a picture of desperation for many in American society.

“This is part of the larger emerging pattern of evidence of the links between poverty, hopelessness and health,” said Robert D. Putnam, a professor of public policy at Harvard…

This is sobering, as well:

Though suicide rates for older adults fell over the period of the study, men over 75 still have the highest suicide rate of any age group — 38.8 per 100,000 in 2014, compared with just four per 100,000 for their female counterparts.

When you look at the charts, you might notice something interesting about that:

You can easily see that spike for middle-aged women and for older men. But notice that both women and men over 75 had suicide rates even higher in 1999 than recently, the only category with that pattern. Has growing old become less depressing in the 21st Century for both sexes, while being middle-aged has become more so (especially for women)? Or are the differences generational?

Look at that. Men at the top, again.

“Black men were the only ethnic group with a decrease.”

Will we hear of the need to fight the suicide color gap?

Just sayin…. African American men tend not to be married at the same rate of white men.

I remember a few years ago reading about (and hearing it discussed on a talk radio show) a study of teenagers and self-image. White teenagers had the lowest, most negative self-image while blacks had the highest, most positive self-image. I look at young white teens today, specifically white, working-class teens, and see an almost flaunting of self-dislike and self-destructive signaling.

Given the data sample range, clearly this is George Bush’s fault.

Off topic, but I don’t see a Tip Line link anymore.

Still has to do with the health (and suicide?) of our culture and society, though.

Camille Paglia, my favorite lesbian feminist. She’s in need of a hefty dose of Ritalin, but she’s an island of sanity in an insane, growing corner of the Western world;

You’ll find it under “Forum” on the top bar between “Amazon” and “Wiki”.

Those of us who are older know what life in this country used to be like, and how much of a $#!+hole it’s become under Zero. We know what the Constitution is, what the Bill of Rights are, what it means to have Liberty, and what a stark contrast that is to today’s society. We know what life was like before crazies, pervs, and communists/Marxists/socialists had infiltrated every level of government.

Most of the younger generation doesn’t really grok the transformation that’s been imposed upon us. They understand neither the extent nor the magnitude of that change. They simply don’t get it, because you can’t miss something you’ve never had nor experienced in the first place.

The (phony) rise in suicides among transgenders who don’t “transition” is cited as a primary reason to celebrate and enable a child’s decision to do so. What should we change to reduce the number of suicides reported here?

In the video link of Camille Paglia I posted above, she talks about just this.

So the whole hope and change thingy hasn’t worked?

Not interesting until you group out bipolar disorder.

That illness is a ticking time bomb for suicides. They may be hidden in OD or other.

My wife being a nurse says that I wouldn’t believe the number of people who are on Mental Meds for scores of different psychiatric ailments.

Often people jump on and off their meds causing chemical instability in their brains. These chemical transition periods can increase their depression and loss of rational thought.

Mike: If I could, I would as your wife’s opinion on how many she sees on these meds that likely either don’t need them, or are on dosages that are way out of proportion.

I have a depression problem, but any of the meds we tried made me into a being with no feelings, or just… spaced out. I do without them as they caused a set of problems worse than the depression.

I see “poverty, hopelessness and health” issues being mitigated by community relationships, not by the pretense of social media.

I’d rather bowl alone than with a civic organization controlled by bossy leftists insisting on gutter guards and equal scores for all groups, with especially equal scores for historically disadvantaged groups.

P.S. I actually thought of you when I posted the link of the interview with Camille Paglia above. I’m not religious, but I have a lot of respect for religious Christians and Jews. I thought, “If there’s one lesbian feminist Jennifer Johnson might admire, it would definitely be Camille Paglia.”

She is a true classical liberal. A dying breed.

Your definition of “classical liberal” may be putting a bit more strain on the English language that it can reasonably be expected to stand.

Could be. I’m not always as exact as I like to be. I know she considers herself a progressive and supports Bernie Sanders.

But there is an openness to competing ideas and seeking the truth no matter where the search takes one, that is so rare among self-identified progressives these days.

She is not the type to demonize or shout down those with whom she disagrees. As a lesbian feminist, I give her kudos for that.

I see someone gave you a thumbs down. It wasn’t me. I think you are right to some degree.

Thanks Luke for thinking of me. I’ll check out the video after shooting range practice.

Feminism is a curiosity to me. I see it as kind of a side show to a travelling circus. The performers are contortionists who spend their time showing us their abstracted lives.

I have worked in an engineering field most of my life. I have seen many professional women pushing to reach their personal goals, whether in a career at the office or at home. And, we make tradeoffs just as the guys do.

The women I work with fill important positions, e.g., engineering support at a nuclear plant or as top legal counsel for contracts and new business clients.

At our company we women meet every six weeks at a Community of Practice for Women Engineers to learn how to better ourselves as professionals. Feminism seems silly compared to what we do.

Feminism wants to show women what is important. I don’t buy the tickets they are selling to the side show.

Besides your always excellent posts, the fact that my niece is also named Jennifer Johnson helps to make you hard to forget 🙂

By the way, she just gave birth to her fourth child yesterday.

I doubt there is any other young family in progressive Santa Monica with four children. Makes me think of an old interview with Andrew Breitbart where he talks about driving around neighboring Brentwood in a station wagon with his four children, laughing that his old progressive classmates must think he’s become “some kind of crazy Christian.” My wife and I have three kids, and none of my old progressive classmates on Facebook have more than two. Most have either no children or one. Maybe they view me as some “crazy Christian”?

Speaking of engineering, our daughter began as an engineering major but became more interested in business and ended up graduating a double major in math and economics. She just started a new job yesterday for a marketing start up here in Santa Monica as an account manager. Needless to say, just from her background and focus I don’t need to tell you she laughs at today’s so-called “feminists.” She sees them mostly as bitter, unhappy, losers looking to give giant social-forces meaning to their little lives. I showed her a video clip recently of a strident feminist (definitely not Camille Paglia) raging about the usual tired litany of supposed societal injustices, and she shook her head and simply quipped, “Having a sense of humor would go a long way for these sad people.”

But you have to admire her. She puts the search for the truth above any personal identifications.

Thanks LHC. You are kind.

This Jennifer Johnson has four grown “kids” – three sons and a daughter. I also carry the moniker “crazy Christian.”

Congrats to your daughter on her new job! Math and economics and a whole lot of initiative!

I think the advent of social media and the 24 hour drive-by media could be a factor. You used to only have your friends at work and the 6:00 nightly news to see all the things and all the fun other people are having. Now with facebook and 24 news, you see the latest clothes, gadgets and vacations others are having and it makes you unhappy. Put down remote and the phone and enjoy time with your families (as I’m typing on a computer).

We live in a time when we see many…or most…of the values we hold as intuitively right being attacked by the Collective as…not just wrong…but evil.

The disease is ‘obama’ and the doctor is ‘Boehner.’

A serious affliction that might not have proved hopeless, but for the drunk, cowardly doctor chosen by the corrupt GOPe clinic you sought a cure from.

While the obama disease is reaching terminal phase, two miracle-men are on the horizon: Doctors Trump and Cruz.

Either of them will work the cure.

No neither Trump or Cruz is preferable to President Hillary Clinton?