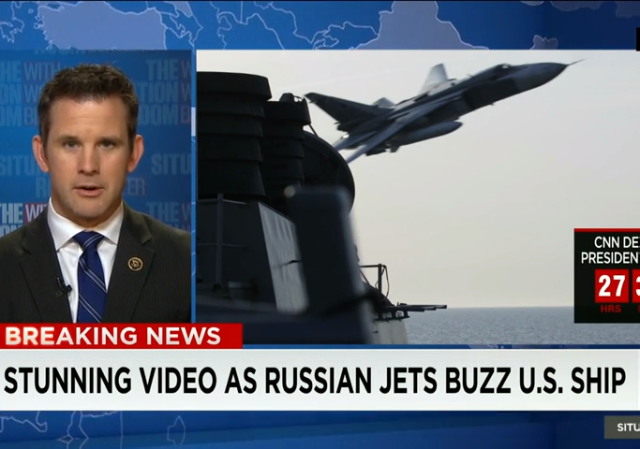 This wasn’t an isolated incident, either. According to various reports, the Russians carried out this maneuver multiple times over two days and American defense experts are stunned.

This report from the Military Times puts the incident in perspective:

In one of the most aggressive actions in recent memory, Russian warplanes conducted “simulated attacks” on the a U.S. Navy vessel in the Baltic Sea on Tuesday, repeatedly flying within 30 feet of the ship, according to a defense official.

Sailors aboard the destroyer Donald Cook said the aircraft flew low enough to create wake in the sea waters surrounding the ship, and the ship’s commanding officer said the incident was “unsafe and unprofessional,” the defense official said.

“This was more aggressive than anything we’ve seen in some time,” according to the defense official, who spoke on condition of anonymity because U.S. officials have not officially disclosed the incidents.

Sailors aboard the ship described the Sukhoi Russian Su-24 as “wings clean,” meaning there were no visible bombs or armaments on the aircraft, the defense official said.

The nature of the overflight as a “simulated attack” may violate a 1973 treaty between the U.S. and Russia that specifically prohibits this type of maneuver, the defense official said.

The maneuver was one of several aggressive moves by Russian aircraft on Monday and Tuesday.

Shortly after leaving the Polish port of Gdynia, near Gdansk, on Monday, the Donald Cook at was sea in international waters conducting flight operations with a Polish helicopter, part of routine joint training exercises with the NATO ally.

During those flight operations, a Russian Sukhoi Su-24 combat aircraft appeared and conducted about 20 overflights, coming within 1,000 yards of the ship at an altitude of about 100 feet, the defense official said. In response, the commander of the Donald Cook suspended flight operations.

CNN’s Wolf Blitzer showed the amazing footage and spoke with Congressman Adam Kinzinger of Illinois who is a U.S. Air Force veteran. Kinzinger described the incident as “very dangerous.”

On April 11, Donald Cook was conducting deck landing drills with an allied military helicopter when two Russian SU-24 jets made numerous close-range and low altitude passes at approximately 3 p.m. local. One of the passes, which occurred while the allied helicopter was refueling on the deck of Donald Cook, was deemed unsafe by the ship’s commanding officer. As a safety precaution, flight operations were suspended until the SU-24s departed the area.

On April 12, while Donald Cook was operating in international waters in the Baltic Sea, a Russian KA-27 Helix helicopter conducted circles at low altitude around the ship, seven in total, at approximately 5 p.m. local. The helicopter passes were also deemed unsafe and unprofessional by the ship’s commanding officer. About 40 minutes following the interaction with the Russian helicopter, two Russian SU-24 jets made numerous close-range and low altitude passes, 11 in total. The Russian aircraft flew in a simulated attack profile and failed to respond to repeated safety advisories in both English and Russian. USS Donald Cook’s commanding officer deemed several of these maneuvers as unsafe and unprofessional.

The Navy also posted the videos below which are astounding to watch:

Putin is the bully on the corner who pushes people around, going further each time until someone stops him. It’s unclear at this time what, if anything, Obama will do about it.

Somewhere, Mitt Romney is shaking his head in disgust.

DDG-75 is an Aegis ship. They should have lit up the Sukhoi.

At close range the Aegis radar could have fried the electronics in the Frogfoot. If I recall it can put 7MW down a 1 degree path.

Fencer, not Frogfoot. My bad.

The problem is, if they had, they may well have ended up smacking into them.

Obama will do nothing about it. He is a wussy.

That’s why they keep pushing.

Over the next 9 months we will see two dynamics accelerate: obama’s intentional acts to further weaken the United States, and our enemies’ actions to take advantage of the fact that the United States’ president wants to see it destroyed.

All’s fair in the post-reset period.

After the second pass is when the captain gets on the radio and tells the pilot he will be fired upon if he passes again. At least that’s the way the US military did it until 2009.

“Somewhere, Mitt Romney is shaking his head in disgust.”

Has Obama apologized to Russia yet for having the Cook thoughtlessly in the way of their warplane?

Couple things.
First, Russians think of the Baltic as their private pond. They’re wrong, but it’s how they think.
Second, “painting” them with radar would be recorded by the Ruskies plane. One thing they want to find out is what capabilities we have to try and develop counter measures.
Third, Ruskies and we have been playing these games for a long time. Anyone remember when the Ruskies rammed American ships in 1988?
U.S.S. Caron
https://www.youtube.com/watch?v=N4jQhnXrWbg

If you speak Russian then you can tell us what the guy is saying.
Tu-16 crash after a low pass by aircraft carrier USS Essex
https://www.youtube.com/watch?v=l3bijF2–os

So what is the reason we’re making noise over this? Do a search of Russian/American incidents and you’ll see a lot of them. What’s the purpose of airing this when it’s gone on since the cold war?

And finally, if you click on the gear icon on the Youtube video you can slowmo the video which makes it even more interesting.

“What’s the purpose of airing this when it’s gone on since the cold war?…”

Quite a question. Things like this (like assassinations) also have gone on since time immemorial. They get air-time too, considering they sometimes start World Wars.

In context with the lazy, incompetent boy-president occupying the White House, this mean a lot more than an incident under any other US president.

“Somewhere, Mitt Romney is shaking his head in disgust…”

Yeah, shaking his heat at HIMSELF in disgust.

Had he not ran as ‘Mitts’ Romney, he would have been president.

BTW, the Russians didn’t buzz a ‘US’ ship – they buzzed Obama.

Next time, it’ll be a Russian helicopter, which will land on the ship’s deck and sodomize the captain. Obama will hear about it during a golf game, or in the press, and then direct Jane Kerry to give a speech outraged at Trump.

Had he not run as “Mittens” Romney…

But it’s not like American President Ronald Reagan was just going to sit back and watch. Not at all. He was going to hasten the demise of the “evil empire” any way he could, even if that meant using the US Navy to piss off the Soviets any chance he could get.
—————-
And the second part of that plan hinged on an obscure doctrine of international regulations known as the Right of Innocent Passage. That, and a poorly-translated copy of the United Nations Convention on the Law of the Sea.

The Right of Innocent Passage basically dictates that a warship can pass through the sovereign waters of another state, as long as it’s not up to any funny business. In legalese, it reads:

Passage is innocent so long as it is not prejudicial to the peace, good order or security of the coastal State. Such passage shall take place in conformity with this Convention and with other rules of international law.
————-
But as with all legal arguments, this one starts to get technical pretty fast. Long story about the UNCLOS Article 22 Paragraph 1 short, the Soviet Union believed that it only had to let foreign warships into its waters if those waters fell upon common shipping lanes.

The American government believed otherwise. In its estimation, pretty much all waters within 12 miles of the Soviet coast were fair game.

They went to the 9,600-ton guided missile cruiser USS Yorktown, and its Spruance-class destroyer sibling, the USS Caron.
———-
The idea behind the American intrusion was that if you don’t periodically exercise your freedom of navigation, you lose it. And this line of thinking wasn’t just used in regards to the Soviet Union, it was also used in regards to smaller nations as well,
Whole article at link.

This is something we both did regularly during the Cold War. We poke them and see what they do. They poke us and see what we do. If we do something, that reveals something about our capabilities that they may not have known. The best course of action is to do nothing, and thus reveal nothing. So having a poltroon in the White House may have worked out OK for us this time.

One wiseguy suggested filling our chaff launchers with glitter and glue, and launching the stuff into their path. 😉