“Mind your own popsicle and let my ovaries be” 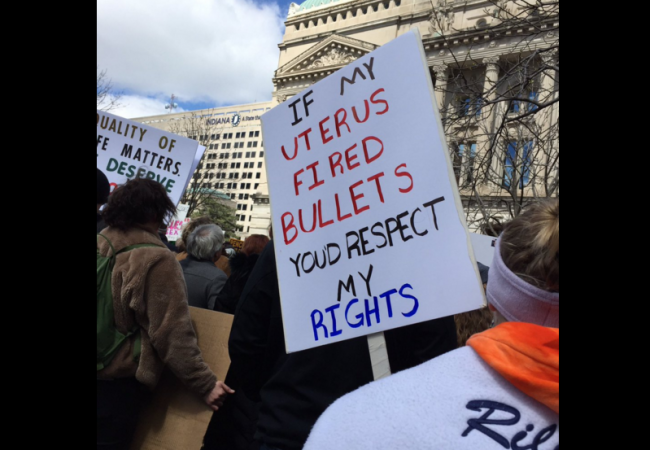 In March, Indiana governor Mike Pence signed into law, HEA 1337, abortion restrictions related to diagnoses of Down’s syndrome and other disabilities, selective abortion based on race or gender, and on the disposal of fetal remains (they are to be interred or cremated under the new law). At the time, Governor Pence said the new measures were “comprehensive pro-life measure that affirms the value of all human life.”

Because abortions are down nationally and by 20% in Indiana over the past five years and is below the national average, there was some question about what practical benefits the law might have.

One reaction that the law has had is the formation of a trolling campaign called “Periods for Pence” in which women tweet, email, and phone the governor’s office to report on their menstruation cycle and other assorted issues with their vaginas.

One woman invited Gov. Mike Pence to her gynecologist appointment. Another provided an update on her cramps. Another tweeted that she had just changed her tampon.

The social media missives directed to Indiana’s governor this week have been frequent, pointed and unyielding in their descriptions of female physiology. They are part of an unusual campaign on Facebook and Twitter to express outrage at a law that Mr. Pence, a Republican, signed last month that created several new restrictions on abortions.

The protesters often post with the hashtag #periodsforpence and mix anatomical details with a touch of humor.

Here is a local news reports:

Humor is in the eye of the beholder, I guess, but here are some of the tweets under #periodsforpence:

@GovPenceIN @periodsforpence Started my cycle today. When will you be by to check my used pads for HB1337 compliance so I know to be home?

if you think this new abortion law is for the birds, please make your voice or menstrual cycle known to @GovPenceIN #periodsforpence

ma has been at peak #periodsforpence all day on the horn (facebook) ? pic.twitter.com/U9ZJMozCOt

They even sing! Featuring the soon classic line, “Mind your own popsicle and let my ovaries be”:

Little differentiates the pro-life side from pro-choice side quite as starkly as this social media campaign.  Whereas the pro-life side is focused on the life of the baby, the pro-abortion side is focused on themselves and, apparently, their reproductive organs.  When Governor Pence speaks of “affirming all human life,” he sees the measure as a means of protecting the unborn, but that’s not what the pro-abortion side hears.  Judging from this campaign and its focus not on the life of the baby but on their reproductive organs and how they do or do not function, they don’t hear anything about the baby; instead, they hear a general statement about controlling or monitoring women’s bodies.

By sharing graphic information about their periods, the women have said they hope and to hammer home their belief that what they choose to do with their bodies is not the business of the government.

But that’s not how the pro-life side sees the issue of abortion, so both sides are talking at cross-purposes, with neither being heard by the other.  It would be more interesting if the trolling campaign were reports on what their aborted baby would be doing now had he or she not been aborted: taking his or her first steps? starting kindergarten? going to the prom? learning how to drive? getting married?

“We are always willing to take calls from constituents who have questions, concerns or are looking for assistance,” Stephanie Hodgin, Deputy Press Secretary for Gov. Pence, said in an email about the page and calls.

“If my uterus fired bullets, you’d respect my rights.”

Because you’d have a uterus.

But then she would be campaigning to ban it.

Dagnabit! That means the rotary models were the first banned!

Not sure, But we’re worried about the magazine size,

And Obama would use the Justice Department to smuggle them around the country to create incidents and outrage so as to promote uterus control.

If uterus’s fired bullets, the pussies running the GOP would have the only uteruses that fired blanks.

If it fired bullets, it would actually be useful.

If her uterus is a gun, then abortion is … ?

You’ll have to fill out a form 4473 in order to even think about having that uteri.
Then we’ll have to call in to NICS to be sure your background is clean and felony free. Lying on the 4493 may subject you to criminal penalties.
Plus accordingly you can only have uteri that were available back when the Bill of Rights was adopted.
In some states you’ll also have to a UOID (uteri owners identification card) as well as the possibility of a ten day waiting period before you can have your uteri. This UOID will only be good for a period of 5 years and must be renewed or you can lose your uteri as well as face criminal charges unless you have sold or properly disposed of all your uteri. Fees for the UOID vary from state to state.
If you want to have a concealed uteri, you’ll have to take a class in most states, have a background check and in many cases a uteri inspection by a law enforcement official.
If you use your uteri in an illegal manner you can be made to go before a grand jury to determine if you should stand trial.

That would be the word…

There you are. Where have you been? No letters, no flowers, no phone calls. WHY ARE YOU IGNORING ME???

It’s called ‘unrequited love’, Henry. Sorry, you’re just not my type. You need to find someone needy, who could use some of your affection.

Wow. Dumped on the internet. OK then, fine. We’ll always have Cleveland.

Human life evolves from biological conception, not spontaneous conception, despite the faith and religious wanderings of people and liberal leaders who receive their instruction from gods in the twilight zone (a.k.a. penumbra).

The liberal (i.e. variable or selective) interpretation of science and common religious/moral philosophies that justify reactive and planned parenthood is unprecedented in post-enlightenment human civilizations.

First they disarm the baby, then they decapitate it, then they disembowel it, and then they progress to harvesting her lucrative parts. Its the first step and historical evidence of left-wing ideologues running amuck that concerns civilized people.

The pro-life side reconciles the rights of the mother and her child. This reconciliation necessarily prohibits elective abortion or premeditated murder — and cannibalism or planning — of a human life at a stage in our evolution when we are uniquely vulnerable.

That said, while committing murder is a natural right, soliciting to commit murder is not, and is universally proscribed. The first step in human rights and social reform is a separation of the pro-choice cult and State, including a reversal of the dysfunctional revolution that preys on boys and girls, men and women, and debases our society through progressive morality.

Pro-life is pro-human rights and pro-science. Men and women need to accept responsibility for their actions. Especially when it involves other human lives in their custody. While elective abortion or premeditated murder is a natural right, it is generally considered barbaric or evidence of negative progress in civilized societies. People only have a legal and moral right to affirmatively terminate another human life in self-defense.

There is reactive parenthood, and then there is planned parenthood or clinical cannibalism. A progressive slope.

I hope they all die of ovarian cancer. I’m sick of hearing from these screeching bitches.

Irony. Just another thing the left is clueless about.

Maybe these women should move to a third world country. They wouldn’t have to worry about the government messing with their uteri; they would be too busy just trying to keep themselves and their family alive.

And trying to turn this country into a third world country doesn’t count.

These women (definitely not “ladies”) are pathological. How do they manage to function in the real world? Seriously ~

First, they disarmed the babies.