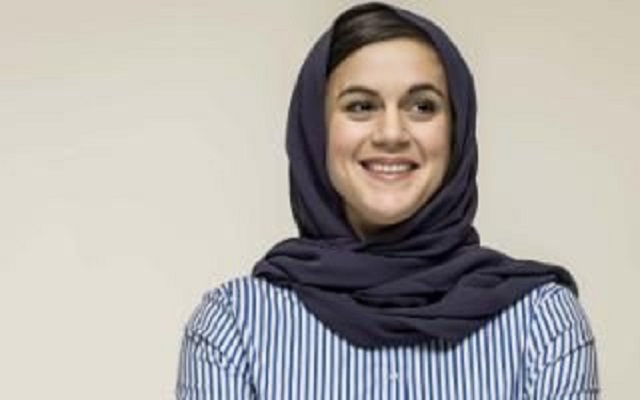 In a world in which universities apologize for serving Mexican food because doing so smacks of cultural appropriation and is deemed culturally insensitive, the student-organized “Wear a Hijab Day” at a Paris university was bound to cause controversy.

Although February 1st is the “official” World Hijab Day, these students were apparently not interested in waiting until early next year to express their “solidarity” with women who “choose” to wear the hijab; unfortunately for them, their gesture backfired.

Students at an elite Paris university sparked fierce debate on Wednesday by inviting classmates to wear the Muslim veil for a day in a bid to “demystify” a practice that is highly divisive in France.

Students at Sciences Po urged women to take part in Hijab Day “if you too think all women should have the right to dress as they wish and have their choice respected”.

A dozen students handed out flyers at the university by a table covered in colourful headscarves with a sign reading: “France got 99 problems but Hijab ain’t one”, adapted from a hit by US rapper Jay Z.

“It is to raise awareness, open the debate and give the floor to women who are often debated on in public but rarely heard,” said Laetitia, one of the organisers.

Despite their best intentions and because of their apparent lack of understanding of the consequences of failing to “choose” to wear a hijab in Muslim countries that stone women to death for appearing in public without one, however, the backlash has been swift and harsh.

Liberal feminists and secularism defenders, alarmed at what they saw as another attempt to impose a highly conservative interpretation of Islam on secular educational institutions, condemned the protest as an “insult” to women who are forced to wear hijabs in Iran and parts of the Arab-Muslim world. The extreme right National Front, meanwhile, tried to exploit the divisions to inflame racism.

. . . . Muslim reformers and journalists Asra Nomani, who has contributed to Women in the World, and Hala Arafa have implored women to stop sporting the hijab as a sign of religious solidarity. They say conservative Islamists and regimes like Saudi Arabia, Taliban Afghanistan, Iran and Islamic State are trying to impose the veil as a “sixth pillar of Islam” when there is no Koranic requirement it be worn, and when the word “hijab” doesn’t even mean headscarf in Arabic but curtain, hiding, obstructing or isolating.

With the recent terror attacks in France and the influx of refugees, France is facing a crisis and is uncertain how to address it.

Islamic head coverings have long been a highly contentious political issue in France, which has some of the hardest-hitting legislation on headscarves in Europe. In 2004 it banned girls from wearing headscarves in state schools, along with other religious symbols such as crosses or turbans.

In 2011, Sarkozy banned the niqab (a full-face Muslim veil) from all public places. State workers in the public service must by law be impartial and neutral, and so cannot show their religious belief with an outward symbol such as a headscarf.

In December last year, the French national consulting body, the Observatory of Secularism, found it would be “neither useful, nor appropriate” to legislate on the wearing of religious symbols – including headscarves – at universities.

The debate about hijabs has been highlighted in North America with regards to court appearances and identification cards such as drivers’ licenses, and in 2014, a Canadian college student donned the hijab to prove that she was treated with racism and hostility when wearing the veil.  She was shocked and horrified to learn that she was actually treated better and with deference when her head was covered as directed by Sharia law.

The Daily Mail reported at the time:

According to Rawhani – who conducted the experiment to see if people in her community were racist towards minority groups – she noticed that people actually treated her more kindly and with more respect than when she didn’t wear the hijab.

. . . .  At first I thought I was just imagining things. There’s no way this is actually happening,’ Rawhani told the Whig.com.

‘I went with my hijab and people were very nice, people were polite, parents would shake my hand, so the experience was all across the board in Kingston.’

In some cases, she says, she would go out with friends who weren’t wearing any identifying religious symbols and she was treated much nicer than they were.

‘There was this excess (of niceness) that I would experience that I couldn’t account for,’ she said. ‘Like really going the extra mile like smiling broadly and being so so polite, which I’ve never experienced before. It was a stark contrast that was going on that threw me for a loop.’

Ultimately, she concluded that people were nicer to her when she wore the hijab because they are racists who were “overcompensating” to hide their racism.

College is supposed to be a time when students are exposed to ideas that challenge them, and if wearing a hijab to show “solidarity” or to shine a light on (non-existent) racism challenges the progressive agenda they are spoon-fed in today’s Western universities, I ‘m all for it.

I suspect—or at least hope—that as these students get a bit older and look back on these experiments in “diversity” they will be a bit embarrassed by, even sheepish about, the cultural arrogance that is required to force their inchoate understanding of the world on others.

It’s not the traditional Slut Walk.

Although February 1st is the “official” World Hijab Day, these students were apparently not interested in waiting until early next year to express their “solidarity” with women who “choose” to wear the hijab…

A lot of women “chose to wear the hijab” because they chose not to be sexually molested, have acid thrown in their faces, or stoned by religious-minded strangers.

And in Afghanistan, a woman wearing a burka can get a beating for showing her ankles if she runs away from a pack of men.

To enhance the experience, the women should have someone with a switch stripe their legs when they take off the hajib.

If you really want to show your stupidity, wear the full burqa for a day. Or better yet, move to Saudi or Iran. You’ll certainly have all kinds of “choices” there.

The ultimate act of defiance of Western civilization.

I have no big problem with the hijab, when it only covers only the hair. However, there have been news stories where the burka and the niqab (garbage bag and bandit mask) have been used more than once by men to escape crime scenes in the UK.

“Ultimately, she concluded that people were nicer to her when she wore the hijab because they are racists who were “overcompensating” to hide their racism. ”

Ultimately, she let her prejudices override the evidence before her. The silly fool failed to ask whether these nice people assumed she was a visitor in their country, and went out of their way to be friendly and helpful.

Ultimately, she concluded that people were nicer to her when she wore the hijab because they are racists who were “overcompensating” to hide their racism.

Well, the Muslim race has long been the victim of racism, so maybe the people who were nice to her were trying to compensate for past racism. You know, reparations for racism. /sarc

Is there such a thing as the “Muslim race” ?

Is there even a “Hispanic race” ? There may be a “La Raza” (translation “The Race”) but are they ready to be called “La Raza-ists” ?

I guess you didn’t notice the /sarc tag?

Pay attention, Neo, or Morpheus is gonna kick you out of the Matrix. 😀

“Ultimately, she concluded that people were nicer to her when she wore the hijab because they are racists who were “overcompensating” to hide their racism. ”

She is basically saying that it is a lose-lose proposition to wear it or not. If she wears it and people treat her nicely then they are bigots. If she doesn’t wear it and people are not nice to her they are uncaring. The answer is for to go back to the desert paradise from whence she came. Or to wear the complete burka and get picked at the curb every Thursday morning!

I would have said that the traditional garb signaled she was more traditional — a woman who would appreciate courtesy rather than an urban sophisticate who would sneer at a man who dared to hold a door for her.

Dress one way and people greet you with a grunt and a proffered fist bump. Dress another way and they’ll exchange more conventional pleasantries.

Nothing really profound there — except that her predictions were falsified, and yet she refused to update her world model.

The veil is nothing more than subjugation. It predates islam and was always used to control women. It says that the woman belongs to a male. She is property. Those who are not property can be raped. The women doesn’t get to own her own body. Any culture which requires women to be buried under gobs of fabric should also require men to dress the same way. If all were subjected to the same rules, those rules would change in a heart beat.

You must not have been educated by old-time nuns.

France is facing a crisis and is uncertain how to address it.

Oh, I’m pretty certain how France will address it—the same way the crisis in 1940 was addressed.

Wouldn’t a non-muslim woman wearing a hijab be cultural appropriation?

I have a better idea for the women of France to show respect to the islamic women all over the world. Every woman should forgo the traditional habits and garments of their oppressive religion and go Western for one day! Imagine actually seeing an individual as a complete person instead of a black bag or partially covered coward!

All this is silly. A niqab is one thing and a hijab is something else. Now if you dress as an Amish, male or female, you will also get the same deference unless you are in an area where people know the Amish well and realize that they are not saints.

I imagine that head-covering will come back in fashion in France as the Muslim population increases. Christian women once covered their heads (look at icons of Mary). There are nuns in habits and some women wear the mantilla in church. What is important is that this be a matter of free choice for all.

This is a silly diversity exercise but it is harmless.

This is not a harmless exercise but the creeping of islamization- trying to “normalize” it (the frog in the pot of water which is gradually warmed up- seems you are in the pot).
Next “hijab day”, the good women of France should walk around with photos of those poor muslim women who were wearing the hijab when they were stoned to death, raped, or had acid thrown on them.

This is like standing in solidarity with gays in Muslim countries by jumping off tall buildings – a ridiculous thing to do voluntarily, but not something you’d want to be forced to do.