Ohio State Shows How to Deal With Student Protesters

Ohio State Shows How to Deal With Student Protesters

Welcome to the world. Your actions have consequences. 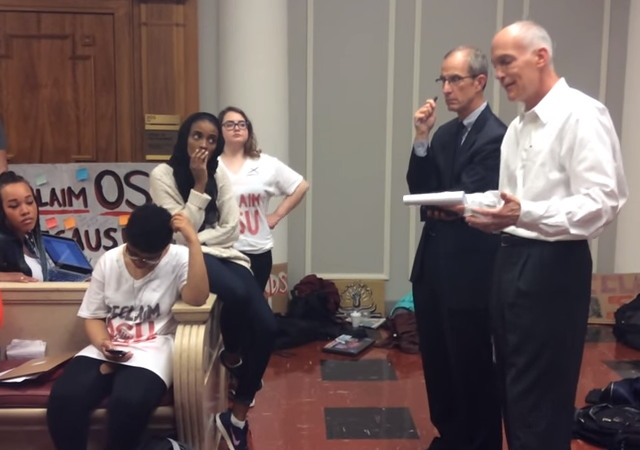 Student protesters at Ohio State University recently learned a valuable lesson. Mainly because the administration drew a line in the sand and told them calmly that if they persisted, they would be arrested and possibly expelled.

The way it was handled was brilliant. An administrator explained to the students that the people who work in the building they were occupying deserve to feel safe too, a concept which blew their minds.

At Ohio State last week, a sit-in and protest inside a university building was cut short when students were warned that they would be forcibly removed by police, arrested, and possibly expelled if they did not vacate the premises within a few hours, by 5 a.m.

Here’s what the administrator said:

If you are students, and I think the vast majority of you are, I want you to understand that you are violating the student code of conduct. As dictated to me by [university president] Dr. Drake 15 minutes ago to me on the phone, we have chosen to try to work with you this evening because we respect you. This is your university.

And we want to have dialogue. We want the dialogue to extend beyond tonight. But if you refuse to leave, then you will be charged with a student code of conduct violation.And I’m telling you this now because I want you to have good thought and careful consideration. If you’re here at 5 a.m. we will clear the building and you will be arrested. And we will give you the opportunity to go to jail for your beliefs. Our police officers will physically pick you up, take you to a paddywagon, and take you to be jail.

Our goal, because I want you to understand why we would do something like this—I didn’t think we were going to—but the consensus of university leaders is that the people who work in this building should be protected also.

They come to work around 7 o’clock. Do you remember when you all made the rush down there and chanted to the folks outside the doors a minute ago?

The reaction from students after that last line is telling. They sigh in disbelief and laugh. The very people who are part of the “safe space” movement scoff at the idea of other people’s safety.

Watch the video below, this is fascinating:

College and university administrations around the country should study this video and require employees to watch it. If this approach had been used at the University of Missouri last fall, they might not be closing dorms and preparing for a budget shortfall today.

It’s not brilliant – it’s common sense. The shame is, and always is, the media can turn this whole common sense scenario around and make the Administration look like villains. It depends on the victim group doing the protesting. I don’t think this would have the same impact on a BLM group. The media, ACLU, the Jackson’s and Sharpton’s, the NCAAP and other professional whiners would squelch it in a heart beat. The Administration would be apologizing by nightfall. Safe Space protesters? Who cares?

The progressive, predictably, are complaining about how OSU used the ‘safe space’ argument.

My response to them (in words they can understand): of course they did. The power structure always co-opts the language of the oppressed.

P.S. For bonus points, see what I did there?

Obviously, their parents didn’t believe in spanking, so they can consider jail their real-world time out.

Admittedly, this is a better approach than that taken at Mizzou & elsewhere, but the discussion went on far too long. The brats should have been given 30 minutes to clear out, not overnight. There should have been no Q&A with the pseudo-intellectual criminals-in-training.

They were treated like the whiny children that they are.

Adults would be told pick up your junk and clean up your mess. The campus police will be here in 30 minutes to arrest anyone who remains.

Children throwing tantrums are allowed to exhaust themselves.

From the student demands: We demand complete, comprehensive and detailed access to the Ohio State budget and investments immediately, as well as personnel to aid students in understanding this information. So these snowflakes want to oversee University investments? But first, it has to be explained carefully. SMH. Good job Mr. Kasey.

I cannot help but think it is like the cupcakes wanting to oversee the bakery.

I’m pretty sure that access is already provided through legal channels since they are a public institution.

Not only that, but not knowing how to read budget and investment information they want to tell the University how to handle its finances.

Children, geesh! How many times have I walked into a grocery store to see the family ‘precious snowflake’ throwing a temper tantrum because Mommy wouldn’t buy the Lucky Charms? Sadly I observe that the liberal mindset has infected the entire society. Presenting a rational argument to children is like flipping a coin, the outcome depends upon the pizza they ate 12 hours previously.

Children are notorious for not seeing past their all important ‘wants’. Thankfully these college administrators understood the usefulness of a verbal ‘Kent State’, without all the mess of dead bodies. What excuse could the ‘precious snowflake’ present to Mom & Dad because they were kicked out of college? ‘Safe Space’? Dad just had a stroke! ROFL

I wonder what would have happened if the #Black_Lies_Matter crowd would have done if they had been promised five years in a federal prison for their criminal behaviors? There is nothing like a good swat on the butt to get a child’s attention…allowable only if the liberal tyrants aren’t watching.

Calmly explain to the student what is going to happen if they don’t vacate the building. Refuse to engage in any argument about your decision. Follow up on your decision. If the students don’t like how the university is being run, they are free to leave and seek an education elsewhere.

Absolutely the perfect approach. Firm but fair, explain that the administration has gone FAR above normal procedures by allowing them in the building after 5:30PM and all the way until midnight, but at 5:30AM, the police will be here and anybody who refuses to leave at that time will be arrested and expelled. There is no debate, this is not a democracy, these are the facts. You’ve had your time to express your point of view. Now we have business to attend to, so go home.

Notice that he also had somebody to record his statement to the ‘protesters’ so he would not have to depend on his word vs. their editing job, and I would be willing to bet several officers were within shouting distance if the students became violent. I give him an A+ for his actions, and hope that many will follow the path he has broken for them.

I’m offended, and all my Irish ancestors are offended too.

Is there a reason that this write up does not tell us the result?
Are to assume that the students all saw the light and left peacefully?
Alternatively, maybe I missed it.

Here is the result.

That is an excellent result.
Thanks.

Today, I’m proud to be a Buckeye alum!

Real Food OSU, United Students Against Sweatshops, and OSU Coalition for Black Lives and the Committee for Justice in Palestine

Ah, the Usual Suspects. Carry on.

If I were one of the employees in a college facing one of these protest groups, the minute they made a move toward me, I would fall to the ground, screaming in fear. Hopefully one or more of the other employees would join me in writhing on the ground, screaming fearfully while one of the other employees videoed the scene to post online! And then I would demand a safe place off campus where I could work without fear of being hounded by the “students.”

“And then I would demand a safe place off campus”

Hooters sounds pretty safe to me!! 😉

Surprised no one yelled racism for the use of Paddywagon.

“Irish are not people of color, they can’t be offended.”-OSU Coalition for Black Lives.