Amidst allegations of “willful and flagrant” violations of campaign-finance law 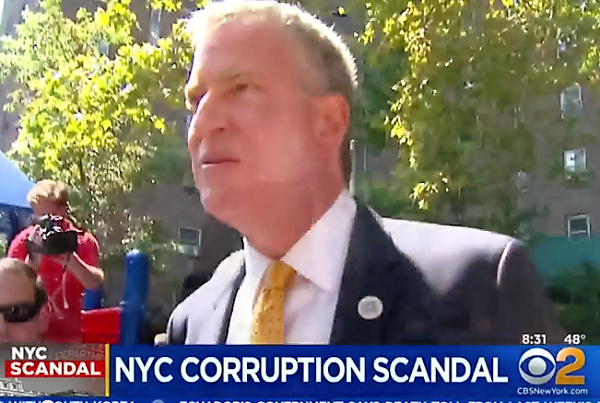 New York City mayor Bill de Blasio is facing a corruption scandal that has Michael Goodwin at the New York Post announcing that the mayor is “going down.”

Less than a week ago, Mayor de Blasio was offering aid to Ecuadorians after the earthquake there. Now a political earthquake is rocking City Hall and the mayor is the one who needs help.

The report from the state Board of Elections that accuses him and his team of “willful and flagrant” violations of campaign-finance laws immediately changes everything.

The veneer of business as usual is shredded. Never again can de Blasio wave off questions about the mushrooming investigations of his administration. As revelations pile up day after day, allies will desert him and the Putz will find himself a very lonely man.

The litany of scandals facing de Blasio is captured in the cover that ran with Goodwin’s article: 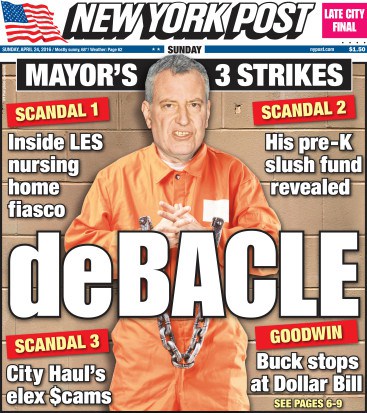 There is no way to sugarcoat the facts: de Blasio is in trouble. Maybe very big trouble.

His City Hall is being depicted as the seat of a criminal enterprise. And so far, he offers nothing resembling a convincing ­denial.

As bad as it is, the election report covering the 2014 state Senate races is just the start. The endgame involves the more ­lethal issue of whether de Blasio sold government favors to donors. That is what federal prosecutors are looking for, and I believe they will find a mother lode.

Yet if the election report were all there is, it would still be a problem. It calls one of the campaign violations a possible felony and refers its findings to Manhattan District Attorney Cyrus Vance Jr. for prosecution. That explains why Vance recently partnered up with US Attorney Preet Bharara in the multipronged probe, effectively doubling the number of prosecutors and investigators.

I’m sure the mayor can reach out to the NYPD for support as he has always stood by them! No, wait…

#NYvalues rise to the occasion, again.

It would be ironic if he did some hard C.P. time!

A really big one.

If justice comes to de Blasio, it won’t be from the people of NY. They knew what he was when they elected him. He’s the white Marion Barry.

I was thinking more on the lines of Dirty David Dinkins.

Wasn’t he a T-rump endorsed brand…???

Uh… he’s openly and now actively supporting Hillary Clinton. How does this have anything to do with Trump? If anything, all of his actions should be tied to Hillary in the upcoming general election.

Uh…was he endorsed by T-rump or not?

I don’t think I would call it an endorsement. He did say he thought the left wing commie might make a good mayor, so there is that.

His City Hall is being depicted as the seat of a criminal enterprise. And so far, he offers nothing resembling a convincing ­denial.

The head of that enterprise is spelled MOB.

It’s the typical disease of the left.

Don’t get me wrong; any politician can be/get corrupt. But there’s something about the left-wing, progressive mindset that makes them more dangerous.
This kind of people think and feel superior to the rest of us. They think they know better than the rest of us. Therefore, for them it is OK to bend the rules, to break the rules if it is “for the cause”.
The end justify the means.
They know what’s best for all of us and they are willing to do whatever it takes to get it done. Given the slightest chance of getting away with it, they’ll use the power of government to imprison and kill all those opposing them. After all, in their mind, members of the opposition are racist or wingnuts, or both.
Look at Hillary Clinton, Barack Obama, Eric Holder, Hugo Chavez, Fidel Castro….You’ll see the pattern.

I suppose that there’s no longer any mutual advantage to remain married to his current wife for purposes of racial pandering. Recognizing this, she’ll now shop her professional wifing services around to others who may need to bolster their progressive racial credentials. Or perhaps she’ll offer her troth to a white woman who needs both racial and gay cred. Even better, she’ll marry a trans-woman to provide racial, gay, and trans coverage…

Then there is the unreported rumors of voter fraud that put him into office to start with.

1) This is New York. Those are not rumors, those are facts on the ground.

2) This is New York. Corruption is the norm and nothing will be done.

Only if the corrupt person is a DemocRAT. Republicans and others need not apply.