Because someone complained. Of course. 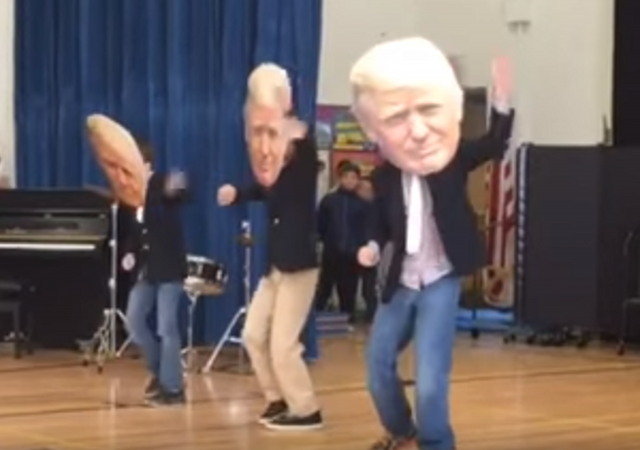 We’ve been documenting the Trump hysteria which has gripped college campuses but we now turn to an elementary school in a suburb of Boston, Massachusetts.

Three boys who came up with a hilarious act for their school talent show have been told the show won’t go on.

Because whose head has been thrust before America this year with such frequency and vigor?

So at the morning show for students and staff on Wednesday, they strapped on three officially licensed Donald J. Trump masks from an Internet vendor called Fathead and started dancing.

But not everyone was amused.

The wordless, two-minute act drew at least one complaint to the principal. And a few hours before the evening performance, the boys were given an ultimatum: Ditch the masks, or sit out the show. The Bobblehead Boys, as they’d come to be known, were no more.

“The bobblehead is the act,” said Maryellen Maggiacomo, whose twin boys, Marc and David, are two-thirds of the trio. No Trump head, no show.

For the boys, it was confusing and upsetting, said Laurie Mattaliano, whose son Christian completed the trio. “They assume they did something wrong.”

And for the adults, the notion that someone would find offense in the benign gyrations of three fifth-graders is evidence that this overheated election cycle has made America grate on people’s nerves.

The video, which you should watch below, is hilarious:

The whole problem is that someone complained but it’s not clear if the complainer was a Trump fan or a Trump hater. Either way, these are little kids who shouldn’t be penalized for it.

I watched a video of the “Dancing Donalds” and it’s impossible to determine if the boys are honoring Trump or making fun of him. So what’s the big deal?

Has our nation become so self-absorbed and so over-sensitive that we can’t laugh at ourselves? Must we take everything so seriously?

So far the Trump campaign has not issued an official statement on the ouster of the “Dancing Donalds.” Although, I suspect they probably think the Trump heads were not big enough.

At this rate can you even begin to imagine what the 2020 or 2024 elections will be like?

It takes place in Wellesley. Their parents would take away their Voss water, their trust fund, and the keys to the pool house if the kids were pro-Trump.

The Bobblehead Boys! You guys rock!

Always remember, if Trump were not in the race, the same anger and venom would be directed at *whoever* was the Republican front runner. If Cruz were #1, there would be anti-Cruz hysteria, if Rubio were #1, we would see college students fainting at pro-Rubio chalk, if Kasich were #1, he would be an anti-woman, anti-minority sonofabitch.

When you hear an anti-Trump story, don’t sit back and smirk, thinking that Trump deserves it because he’s scum; think that *your candidate* would be getting the same treatment.

Well, you know someone is gonna say it…what if it were three girls wearing Hillary Fatheads?

The entire LI Cruz Klan would be having the vapors.

“The whole problem is that someone complained …”

No. Complaining is fine — petitioning the government even for our dumbest, least-justified grievances is also a first amendment right. The problem is how the adults-in-charge reacted.

SCOTUS struck that down when they ruled in the California Prop 8 case that edicts from the bench cannot be challenged.

“…it’s not clear if the complainer was a Trump fan or a Trump hater.”

You need to spend some time over at Instapundit, where they have a “report abuse” button on every comment. It has become a shooting gallery of censorship, almost always targeting anti-Trump statements.

There’s no question which side is doing it.

My opinion is the kids are just being funny and quite creative. I’m neither a Trump “hater” nor a “fan” but does anyone still doubt that we’re not a fascist nation now?