Legislators Move to Defund U. of Tennessee’s Office of Diversity

Legislators Move to Defund U. of Tennessee’s Office of Diversity 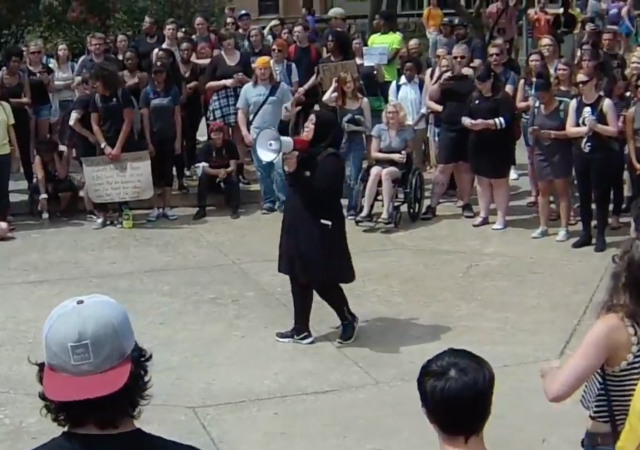 Tuesday, Tennessee’s General Assembly passed a bill that would defund the University of Tennesee’s Office For Diversity and Inclusion. The bill has been passed to the state Senate.

Legislators would divert funds currently allocated to the Office of Diversity, “to minority scholarships for engineering students. It would also bar the university from using state funds to support the annual Sex Week programming or gender-neutral pronouns,” reports The Tennessean.

The bill passed 9-2 Tuesday in the Senate Finance, Ways and Means Committee. It appears to be headed for the Senate floor, although multiple senators in the committee suggested they disagreed with the version of the bill that was passed by the House of Representatives Monday evening.

The House bill was amended to send about $100,000 of the Knoxville diversity office’s funding to a program that would print “In God We Trust” decals for law enforcement vehicles while sending about $336,000 to minority scholarships.

Both chambers will have to agree on one version of the bill for it to become law.

Republican lawmakers have threatened to defund the diversity office for months after two controversial posts on the office website that promoted the use of gender-neutral pronouns and “inclusive holiday celebrations.” University officials eventually removed both posts, but lawmakers have continued to question UT’s diversity funding throughout the legislative session.

UT has not commented on how the diversity office would operate if the bill became law, or if the people in that office would lose their jobs without the state funding the office depends on. In a statement Tuesday, university spokeswoman Karen Simsen said “it is speculative for the university to comment about pending legislation.”

Most college campuses have their own version of Sex Week. Fine. But expecting state taxpayers to foot the bill is more than a bit tone deaf.

Sounds like the office of diversity program got the shaft. There maybe some on the receiving end at the office who no doubt will enjoy that.

It’s long past time for state legislators to start pushing back against this nonsense. Taxpayers should not be funding this bull$hit.

Legislators would divert funds currently allocated to the Office of Diversity, “to minority scholarships for engineering students.
——————————

They’re teaching the students about legislative sex. Good and hard.

Legislators would divert funds currently allocated to the Office of Diversity, “to minority scholarships for engineering students.

So, the Legislature will handle blatantly racist spending programs directly, saving the university the effort of doing so.

Getting more students of any color into Engineering programs is infinitely more useful than funding “sex week” at a college… as if the students need any instruction in that particular activity.

Not sex education, but they desperately need a class to answer: Where do babies come from?

My best friend’s husband is an engineer, retired after 50 years of it in CA. He told me he has never once, not one time ever, encountered a black engineer. Not once.

That money should be returned to the taxpayers (LOL!) or used for some of the white kids living in terrible poverty in Appalachia, which is where UTK is. Now THAT would give them the diversity they seek.

That’s interesting. The DC Metro has mostly all black “engineers”. In fact they passed over a white male engineer near completion of a Ph.D. in favor of a black man who was barely literate…”
http://www.washingtontimes.com/news/2012/mar/26/metro-derailed-by-culture-of-complacence-incompete/

I’ve hired a couple black engineers, 10-20 years ago. One was darn good, the other not. About the same ratio as I found for other color hires.

Of course, I favor color blind monetary help when the state is involved. Private funding can use whatever criteria they wish.

Another nail in the class diversity coffin.

We have been lied to:
“In summary, when aggregated across studies, an extensive research literature on group performance has shown no overall advantage for demographically diverse groups, with a small tendency toward disadvantage”

That’s beside the point.

The goal of civilized society is not to promote racism, sexism, etc, but to reconcile moral: individual dignity and intrinsic value, and natural (e.g. evolutionary fitness, finitely available/accessible resources) imperatives.

The merit of individuals can be and should be judged independent of class diversity schemes which serve to debase human life individually and as a whole.

Next up: defund the Women’s Studies program and use the funds for the football team.

The perceived need for such a program gives lie to the efficacy of the whole sex education programs foisted upon the students during their K-12 education.

Depending upon the school district, commencing as far back as elementary school, sex education classes have been required now for decades. Students graduating from High School and entering college have had years and years on these topics, and have seemingly passed the courses. Yet, more programs are required along these lines in college?

This is either a huge admission of absolute failure, or is a federal teat-sucking scam from the ground up.

The perceived need for such a program gives lie to the efficacy of the whole sex education programs foisted upon the students during their K-12 education.

Sex Week has nothing to do with ‘sex education’. It’s wholly devoted to forms of self-gratification, not so long ago identified as perversions. If UT intends to continue devoting campus facilities to it, admission charges should be levied on attendees, sufficient to pay the ‘staff’, the security expenses and a fair rental on the space occupied. The Legislature would be right to defund it.

Some of the most miserable (LGBT) people are those that embrace such a mantra.