Talk about an education fail 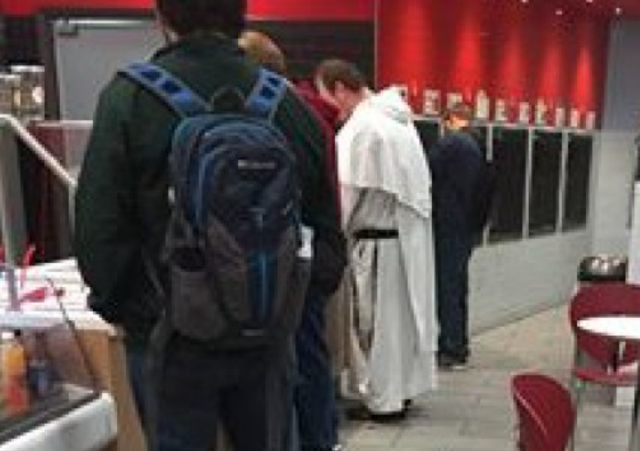 Indiana University students mistook a Dominican Monk wielding a rosary for a klansman with a whip. This wily foe was up to no good at Red Mango — the frozen yogurt joint.

Twitter was abuzz with reports of a weapon-bearing klansman terrorizing campus. 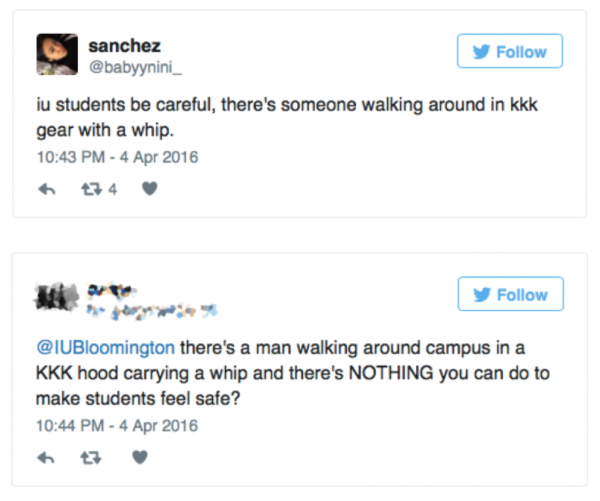 According the The Tab, who first reported the story, a campus Resident Advisor cleared up with misunderstanding for the ignorant masses:

“This is what happens when there is miscommunication. So what happened tonight goes like this: a person saw white robes and what looked to them like a weapon, got scared (rightfully so), warned people, warned staff, which in turn caused me to warn my residents because I need to look out for my residents, which in turn made it spread.

“Then my residents, terrified, come running to me, saying yeah the report must be true, they saw him and couldn‘t believe there was a klansmember with a whip. And I see this picture. It’s a priest. With a rosary.

“Now, I get it why a person would be scared. There in fact HAVE been klansmembers on the campus spurting hate speech, but never have they been reported with a weapon. So yeah, if it was in fact a weapon and a threat, it’s a good thing to warn a friend. So when someone warns other people, we need to be cautious. However, what I’ve learned from this is to take anything with a grain of salt. In the future, I’m still sending my residents warnings of threats, crime, hate gatherings, and all that but I will wait for a confirmation. But now that there is no danger I can say: this is a hilarious miscommunication.”

The Tab caught up with Father Jude McPeak, the Dominican friar in question who said, “I thought it was kind of funny, a lot of my friends have been teasing me. It’s been humbling.” And no, he does not hate black people.

At least this student gets it:

There is no hope for our country with leftist idiots controlling our education system at all levels. We are producing generations of complete nitwits.

In their defense, Indiana has been ground zero for the Klan since the 1920’s. Along with the bordering state Kentucky, Indiana is one of the few places I have seen Klansmen in public in robes.

I ‘fear’ to admit that’s my (sort of) alma mater. Perfectly understandable given the pervasive academic brainwashing of the past 40 years, but still…

Now, I get it why a person would be scared. There in fact HAVE been klansmembers on the campus spurting hate speech…

Lemme guess: neatly dressed kids handing out copies of the US Constitution?

The lack of intellectual curiosity in this younger generation is unsettling. Why didn’t those kids go up to the “klansman” and ask him why he was wearing a white robe? I recall the day about ten years ago when I was driving through Brevard, NC and saw a black man in a confederate uniform walking along the road carrying a Confederate flag. I told my wife, “I just have to see what this is all about”, hung a U-turn and parked a little way in front of the man. I got out, walked up to him and said, “I just had to meet you.” It turned out that the man was H.K. Edgerton. The two of us had a good talk.

I’ll be passing through Brevard this Saturday. If I see HK, any message?

What happens now is that Klansmen across the country will robe up and hit the college campuses certain they’ll be mistaken for Dominican monks.

On a serious note, this is not taught at all to these easily offended students who still see us as a slave owning nation, but monks were enslaved by the Vikings and sold all over Europe. So, these students have not only no right to complain, but they ought to understand that the issue of slavery was not just a “black” problem and their failure to recognize that these men in robes once were persecuted too and may well be again as this country starts to persecute Christians for following their faith.

“So what happened tonight goes like this: a person saw white robes and what looked to them like a weapon, got scared (rightfully so)…”

Only a moron could be excused for being afraid at the sight of a priest with a rosary. The perception of the priest (and his “weapon”) was grossly unreasonable, and caused by spending a lifetime steeped in progressive nonsense about race and firearms (and by extension, all personal weapons). These people saw what they have been conditioned to see, demonstrating their blindness to the truth shown to them by their own eyes.

Needs to be a travel ban on Indiana University students traveling to Spain to avoid an international incident. If you have no idea what I’m talking about, search Spanish Catholic religious festivals on any image search site. As you peruse the images, you an enjoy the irony that the Klan was also anti-Catholic.

I am glad this “klansman” didn’t have CHALK in his hand because if he did the open minded and tolerant students would be really hurt and crying incessantly!

In hindsight, it is completely understandable. So many of the leftists on campus have never actually seen a priest before.

They’re even less likely to have seen a Klansman. There are a hell of a lot more Dominicans than Klansmen. Priests may be a threatened species in these secular times, but Klansmen are downright endangered (and a good thing too). If they weren’t human it would be illegal to disturb their habitat or to harass them.

Too bad these students are so stupid that they do not know they should fear modern Democrat totalitarians (who are real and active) rather than the old Democrat KKK (an imagined presence in this case).

…and here I was thinking that Orwell’s farm animals seemed a little too dumbed down and childlike.

I imagine a lone klansman in uniform on a college campus would be more of a target than a threat, even with the whip.

People anywhere from Dominican monks to Star Wars characters to butchers to lab techs to medical clinicians commonly wear full length white attire. The key to this thing is that the Special Snowflake brigades instinctively jump to the worst possibility. They’ve been indoctrinated to this.