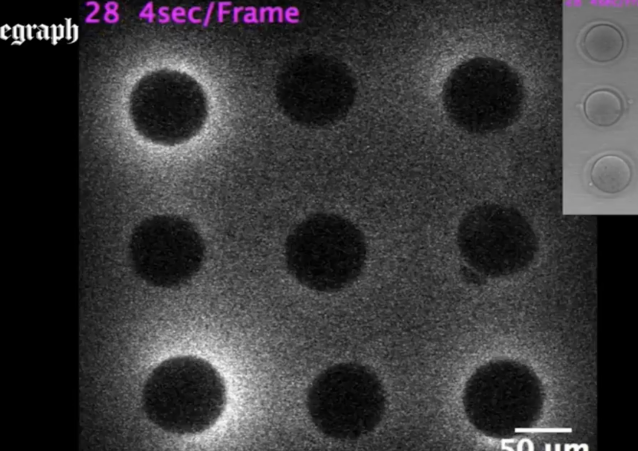 We all began with fireworks… or a calcium/zinc reaction.

When a sperm meets an egg, a bright flash of light signifies the beginning of a human life.

The Telegraph published footage of this fascinating phenomena:

Almost as interesting as the footage? The Telegraph acknowledges that life begins at conception:

Human life begins in bright flash of light as a sperm meets an egg, scientists have shown for the first time, after capturing the astonishing ‘fireworks’ on film.

An explosion of tiny sparks erupts from the egg at the exact moment of conception.

Not only is it an incredible spectacle, highlighting the very moment that a new life begins, the size of the flash can be used to determine the quality of the fertilised egg.

It’s not just human life that gets a bright welcome to the world. The phenomena or zinc spark, was first observed five years ago in a mouse.

The discovery could help fertility doctors pick the best fertilised eggs to transfer during in vitro fertilisation (IVF).

“It was remarkable,” said Professor Teresa Woodruff, one of the study’s two senior authors and an expert in ovarian biology at Northwestern.

“We discovered the zinc spark just five years ago in the mouse, and to see the zinc radiate out in a burst from each human egg was breathtaking.

“This means if you can look at the zinc spark at the time of fertilization, you will know immediately which eggs are the good ones to transfer in in vitro fertilization.

“It’s a way of sorting egg quality in a way we’ve never been able to assess before. “All of biology starts at the time of fertilization, yet we know next to nothing about the events that occur in the human.”

Scientists from the University of Chicago, who published the study, believe the discovery will pave the way for more successful in vitro fertilization:

“This is an important discovery because it may give us a non-invasive and easily visible way to assess the health of an egg and eventually an embryo before implantation,” said co-author Dr Eve Feinberg, who took care of the patients who provided eggs for the basic science study and collaborated with the research team.

“There are no tools currently available that tell us if it’s a good quality egg. Often we don’t know whether the egg or embryo is truly viable until we see if a pregnancy ensues.

“That’s the reason this is so transformative. If we have the ability up front to see what is a good egg and what’s not, it will help us know which embryo to transfer, avoid a lot of heartache and achieve pregnancy much more quickly.”

Been trying to find confirmation of this.

the size of the flash can be used to determine the quality of the fertilised egg.

“…quality of the fertilized egg.”

That will kill this (i.e., funding will dry up), when it’s denounced as having something to do with “privilege.”

Sorry, I don’t think life begins at conception. I can put firefly glow oil (luciferin) in with the enzyme luciferase and make it glow but it’s not alive.

I believe life begins at neural tube closure and fetal brain wave activity by about 8 weeks.

Two independently acting cells that have different functions and will never replicate come together and start multiplying totally new types of cells that begin forming tissues. How is that not life?

Because not all life consists of single cells, that’s only found in the lesser complex life forms on the planet.

Even regenerative organisms require tissues and a good portion of most organ systems to regenerate into two new organisms.

What you describe sounds awfully similar to a virus infecting a host cell. The virus is not alive.

Human cancer cell lines in a dish, also not alive. Sure, they are capable of metabolism and reproduction but they aren’t sustainable and can’t become a human being without putting other stuff in the mix. Those cancer cells actually contain all of the instructions that the zygote has…doesn’t mean they are alive. A desk is not a desk until you put it together using the instructions…before that, it is just potential.

There are many, many abortions that are deplorable and should be illegal. I don’t count the very early ones among them.

Are you against IVF too? If what you’re saying is true…IVF murders far more “alive” humans than it produces.

Also, this is not actually a video of conception as the scientists in the study used sperm enzyme rather than actual sperm to make this happen.

I guess it would be ok to call it a simulation of the moment of conception (however, it does not naturally emit light either…it’s a current of release zinc that only emits light because they used fluorescent dyes to bind the zinc.

In any case, photons are released in the simulation.

Yes, but the headline is inaccurate in stating, “Human Life Begins With a Bright Flash of Light.”

How do you know? A miniscule amount of photons were most likely released in the inital bio-chemical reaction.

“The conclusion that human life begins at sperm-egg fusion is uncontested, objective, based on the universally accepted scientific method of distinguishing different cell types from each other and on ample scientific evidence (thousands of independent, peer-reviewed publications). Moreover, it is entirely independent of any specific ethical, moral, political, or religious view of human life or of human embryos.” From Dr. Maureen Condic’s “A Scientific View of When Life Begins”
https://lozierinstitute.org/wp-content/uploads/2014/06/On-Point-Scientific-View-of-When-Life-Begins-Condic-2014.pdf

Did you know that “Every atom of carbon in every living being was once inside a star, since the interior nuclear furnaces of the stars are the only places in the universe where this element can be made.” John Polkinghorne, Science and Religion in Quest of Truth

See above…this view is outdated (hence inaccurate language like “universally accepted”) since the rise of cell biology and our further understanding of smaller and smaller units of organization.

When you get a blood test, do you murder white blood cells?

When you have a biopsy, do you murder a piece of an organ?

What is the criterion for life? Is it possessing DNA? If so, then the cell is not the smallest unit of life, it would be the mitochondrion.

So far, you have equated a human zygote with a virus, a white blood cell, and a biopsy sample.

I don’t think you’re impressing anyone with the quality of your arguments.

In no sense is “this view is outdated… “

You are trying to parse the beginning of “life” down to something that you can take political control of and then write off as a given.

And since your own neural activity cannot comprehend the beginning of “life” you dismiss multitudes of biochemists, doctors and scientists who can comprehend our beginnings.

The popular faith in liberal societies is that human life is the product of spontaneous conception at the moment it is no longer inconvenient (i.e. does not have a disparate impact on the pursuit of wealth, pleasure, and leisure) or profitable (e.g. clinical or planned cannibalism). It acquires and retains value (e.g. class diversity, democratic leverage) based on the religious instruction received from gods or emanations from the twilight zone (i.e. “penumbra”).

And that is why I disagree with liberals on abortions beyond a certain point.

Let there be light. And there’s something very sessy about a fertile Catholic girl….

1) It wasn’t the University of Chicago, it was Northwestern University. (NWU is actually in Evanston, a close-in suburb of Chicago)

2) The flash is generated by a fluorescent dye that lights up when the Zn++ wave happens. Hence, in a natural situation, the Zn++ wave occurs, but there is no flash of light.