An obvious conflict of interests. 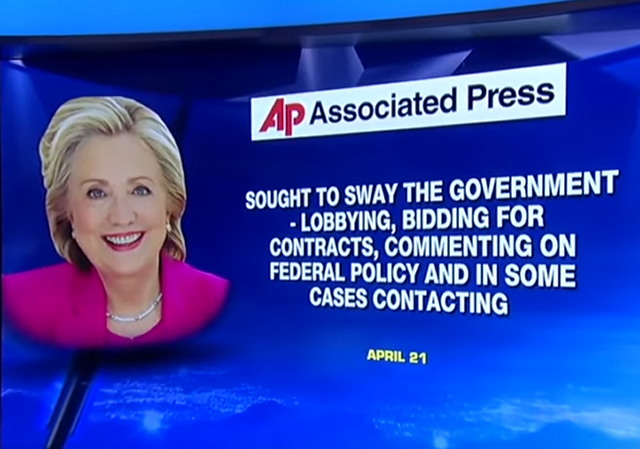 A new report from the Associated Press says that a significant number of companies which paid Hillary Clinton for speeches had interests in government business. This may explain why she has been so reluctant to release her speech transcripts.

Here’s an excerpt from the report:

Firms that paid for Clinton speeches have US gov’t interests

WASHINGTON (AP) — It’s not just Wall Street banks. Most companies and groups that paid Democratic presidential candidate Hillary Clinton to speak between 2013 and 2015 have lobbied federal agencies in recent years, and more than one-third are government contractors, an Associated Press review has found. Their interests are sprawling and would follow Clinton to the White House should she win election this fall.

The AP’s review of federal records, regulatory filings and correspondence showed that almost all the 82 corporations, trade associations and other groups that paid for or sponsored Clinton’s speeches have actively sought to sway the government — lobbying, bidding for contracts, commenting on federal policy and in some cases contacting State Department officials or Clinton herself during her tenure as secretary of state.

Presidents are not generally bound by many of the ethics and conflict-of-interest regulations that apply to non-elected executive branch officials, although they are subject to laws covering related conduct, such as bribery and illegal gratuities. Clinton’s 94 paid appearances over two years on the speech circuit leave her open to scrutiny over decisions she would make in the White House or influence that may affect the interests of her speech sponsors.

Tucker Carlson covered the issue last night while filling in for Sean Hannity:

If Hillary chooses Elizabeth Warren as her running mate, as some are speculating she will, how will Warren square the revelations of this report with her political rhetoric?

As her political pimp, Bill, has observed, she’ll open those lips of hers to please all y’all for a donation to to their foundation, wink wink.

I appreciate your proper use of Southern. As we know, “y’all” is singular and “all y’all” is plural. Good job!

This is news?
Isn’t this exactly what we expected?

I for one never expected the AP to cover it.

An obvious conflict of interests.

I seriously doubt Hillary thinks it is. Most people would feel some obligation, after receiving large sums of money intended to buy your influence. Not Hillary. I’d guess she took the money, and laughed all the way to the bank. The only way the payers will get any benefit, is if their goals just happen to align with Hillary’s.

And how likely is that?

Hillary, a member of the Ruling Class, will consolidate her “power” by luring and converting others to feed at the big government trough. She is pimping her big government booty.

Hillary is “choosing” only those financial fat cats who will keep her power and place and appetite secured. In so doing the Ruling Class continues to make life for the small independent business owners exceedingly difficult. Small business owners do not want to feed at the trough nor become mesmerized and then subservient to its coercive and corrupting force.

Ruling Class Hillary does not care about laws. Laws are for the little people, the kulaks.

Hillary is all in for herself, as is Trump.

No kidding! She’s nothing more that a bribe taking machine. She isn’t for the little people but for the money people. She’s corrupt, unethical, immoral, deceitful ans smarmy.

This report will go nowhere. No one will call her out on it, no one will question her, and the public will never know (never care).

That’s how things are in this Clinton world. All of her major and egregious problems are hidden from the public. Once again, all of these questions will come up six years from now (if she is elected). It happened with Obama and I see no reason why it shouldn’t happen with her.

At most, we’ll see a further display of her usual tactics—delay, obfuscate, lie, repeat.

Her stupid/illegal/treasonous behavior during and after l’affaire e-mail hasn’t torpedoed her, and that investigation has the force of law. This doesn’t even have that much; it won’t register as so much as an itch. In Hillaryworld, this is just an ordinary day’s work.