Greece: Riots Break Out As Refugees Set to be Deported to Turkey

Greece: Riots Break Out As Refugees Set to be Deported to Turkey

“We are expecting violence. People in despair tend to be violent” 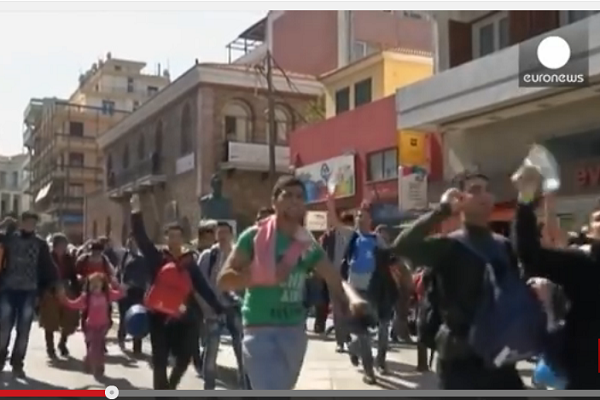 In the wake of the EU deal to return refugees to Turkey en masse, Greece is preparing for further violence and protests.

The Greek government is bracing itself for violence ahead of the European Union implementing a landmark deal that, from Monday, will see Syrian refugees and migrants being deported back to Turkey en masse.

Rioting and rebellion by thousands of entrapped refugees across Greece has triggered mounting fears in Athens over the practicality of enforcing an agreement already marred by growing concerns over its legality. Islands have become flashpoints, with as many as 800 people breaking out of a detention centre on Chios on Friday.

The Greek government is expecting more violent protests and riots as the implementation begins tomorrow.

“We are expecting violence. People in despair tend to be violent,” the leftist-led government’s migration spokesman, Giorgos Kyritsis, told the Observer. “The whole philosophy of the deal is to deter human trafficking [into Europe] from the Turkish coast, but it is going to be difficult and we are trying to use a soft approach. These are people have fled war. They are not criminals.”

The plan seems to be ill-planned, with many critical elements not yet in place.

Barely 24 hours ahead of the pact coming into force, it emerged that Frontex, the EU border agency, had not dispatched the appropriate personnel to oversee the operation. Eight Frontex boats will transport men, women and children, who are detained on Greek islands and have been selected for deportation, back across the Aegean following fast-track asylum hearings. But of the 2,300 officials the EU has promised to send Greece only 200 have so far arrived, Kyritsis admitted.

“We are still waiting for the legal experts and translators they said they would send,” he added. “Even Frontex personnel haven’t got here yet.” Humanitarian aid also earmarked for Greece had similarly been held up, with the result that the bankrupt country was managing the crisis – and continued refugee flows – on very limited funds from the state budget.

The over-stretched resources and poor planning are giving way to bouts of violence on the Greek islands.

On Saturday overstretched resources were evident in the chaos on Chios where detainees, fearing imminent deportation, had not only run amok, breaking through razorwire enclosing a holding centre on the island, but in despair had marched on the town’s port. In the stampede three refugees were stabbed as riot police tried to control the crowds with stun guns and teargas. The camp, a former recycling factory, had been ransacked, with cabins and even fingerprint equipment smashed.

“If they make me go back to Turkey I’ll throw myself and my family into the sea,” said Mustafa, a Syrian waiting with his wife and children at the port of Chios told Agence France-Presse. “We went from hell to hell.”

“This is what happens when you have 30 policemen guarding 1,600 refugees determined to get out,” said Benjamin Julian, an Icelandic volunteer speaking from the island. “I witnessed it all and I know that all the time they were chanting ‘freedom, freedom, freedom’ and ‘no Torkia [Turkey], no Torkia’. That is what they want and are determined to get.”

In the mayhem that had ensued, panic-stricken local authorities had been forced to divert the daily ferry connecting the island with the mainland for fear it would be stormed.

Similar outbreaks of violence had also occurred in Piraeus, Athens’ port city, where eight young men had been taken to hospital after riots erupted between rival ethnic groups on Wednesday.

Well, the migrants have no right to stay and Greece has every right to evict those who won’t add much to the country. It’s not as if they came to be model citizens. They came to be parasites.

Once they make it to Germany, they start talking about conquest. Out loud, where the locals can hear it.

Greece is out of money. They have nothing to offer foreigners, except a path to more financially stable European countries, so deportation is a good thing.

Mark Steyn has remarked many times on the difference between true refugees fleeing war versus those looking for a handout: true refugees look haggard and hungry, while the handout seekers look fresh and vigorous.

Deport them all and begin saving Europe.

Here in Sweden we are told by our far-left how horrible the government & society is in Turkey and how it would be heartless not to accept the innumerable hoards that have WORKED & lived in Turkey for years.

Yet our same government partially subsidies advertising campaigns for discount vacations to Turkey… Weekly we are mailed the brochures to destinations people are ‘fleeing'(because they can live here for free at the expense of others).

People in despair tend to be violent? Know who else tends to be violent? Muslims who are determined to invade and pillage rich, non-Muslim, western countries.

“These are people have fled war. They are not criminals.”. Most of them are people who were ENGAGING in war and they are coming to Europe to carry that war to Europe. They ARE criminals. In particular, they are part of the orthodox Islamic conspiracy to pillage and loot and commit systematic mass murder and mass rape until “all religion is for Allah” (Koran verse 8.39).

Conspiracy to commit murder is a crime and should be prosecuted as such. It makes no significant difference whether the conspiracy is specific in its targets and methods or is loosely organized by general commands.

Not all Muslims are orthodox but MOST Muslims are, especially those emigrating to Europe from the a Middle East orthodox. A clear majority seek the imposition of Sharia law, which is where orthodox Islamic instructions to commit mass murder are codified.

Orthodox Muslims need to not only be kept out, but they need in many cases to be prosecuted for their murder conspiracy. Prosecution is a key tool that we are somehow not using, despite the clearly commanded instructions to commit murder and the clear illegality of such conspiracies. Just enforce existing laws against conspiracy to commit murder!