Germany: Syrian Refugee Admits to Trying to Frame Far Right for His Crimes

Germany: Syrian Refugee Admits to Trying to Frame Far Right for His Crimes

Claims his lack of hope for future led him to arson, vandalism 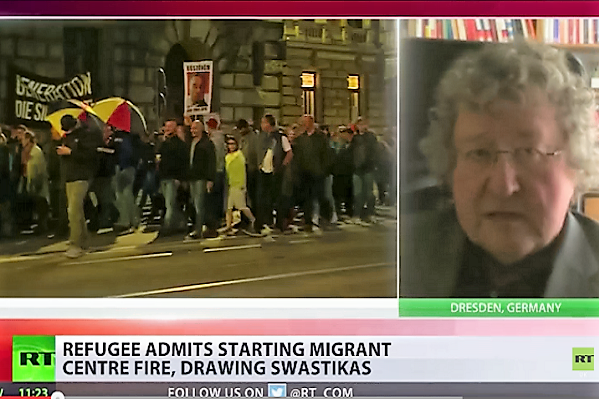 We’ve been covering the refugee crisis in Germany and throughout Europe  Not only is Germany contending with refugee crime waves and push back from German citizens, but now they may have some trouble determining, at least initially, who has done what.  Much like the “fake hate” hoaxes perpetrated in America, particularly on college campuses, a Syrian refugee has admitted to German police that he tried to frame neo-Nazis for his crimes.

A Syrian refugee set a shelter for migrants where he was living ablaze and tried to frame neo-Nazis by painting swastikas on its walls, according to authorities in Germany.

. . . . “During police questioning, the man admitted that he had set fire in the cellar of the multi-use building,” police spokesman Achim Hansen told NBC News . . . .

A total of 26 people were in the building when the fire was intentionally started on Thursday. Two firefighters and four residents suffered minor injuries during the incident. The shelter house refugees as well as migrant workers from other European countries.

“This was very close to a catastrophe,” Hansen said, adding that a “very fast response” by the local fire department helped to prevent fatalities.

The Syrian refugee told police that he did all of this because “he had a lack of hope for the future.”

The 26-year-old alleged arsonist was dissatisfied with overcrowded conditions at the center, investigators in the western city of Bingen said.

. . . .  Meanwhile, police in the northern city of Winsen arrested a 17-year-old Afghan on Sunday after he was allegedly seen setting a fire in the dormitory of another shelter for migrants. All 24 residents were evacuated safely after more than 200 rescue workers were sent.

The motive was not immediately clear.

Of course, the blame is laid at the feet of Germany for not providing him with a decent home and a job.

The Syrian refugee told police that he did all of this because “he had a lack of hope for the future.”

That is SO weird. That’s EXACTLY what the Palestinians say about the “knife intifada”.

Well, to be honest, isn’t that what many say about criminals here is the States?

Yep. And here’s the thing…

In a lot of respects, it’s true.

It’s like the “super-predators” we were talking about the other day here in the U.S. I’ve seen some of these kids (relative to me), and there is a darkness in them. They don’t expect to live to be thirty. Literally.

Whatever culture they came from, they have been taught that it’s the “will of Allah” or the system, or the man, and hope has been drilled out of them. They don’t aspire. They just exist, and they resent and they hate.

Christianity gives hope for the future. Islam does not. So theres that.

The social justice inspired humanitarian disaster is a progressive condition.

The muslim invaders are learning from American college students. Probably not a coincidence, either.

Are we sure they weren’t exchange students?

He wasn’t just ACCUSED, he CONFESSED!