Turkey continues to punish dissent, exerting influence beyond its own borders 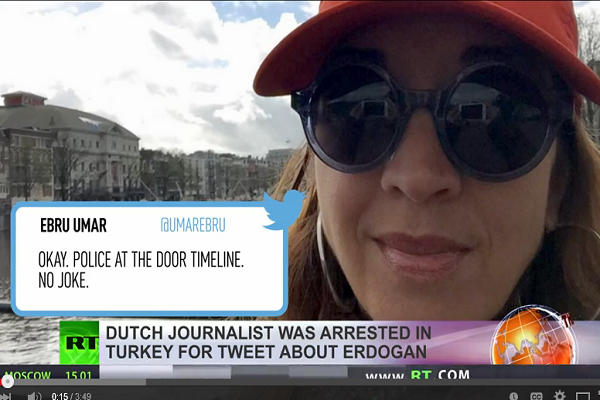 Turkish President Recep Tayyip Erdogan cannot take criticism and will not tolerate dissent in Turkey . . . or, it seems, in Germany and the Netherlands.

In 2014, Erdogan made international news when he ordered sweeping arrests of opposition “journalists, producers, scriptwriters, and even police chiefs” suspected of being aligned with his one of his enemies.

The Clarion Project reported at the time:

Two days after Turkey’s Islamist President Recep Tayyip Erdogan hinted at a crackdown against the “evil forces” of his rival Fethullah Gulen, Turkish police embarked on a comprehensive operation to arrest prominent journalists, producers, scriptwriters and even police chiefs allegedly aligned with Gulen.

The arrests of at least 27 people—for the crime of being, as described by Erdogan, “terrorist forces” attempting to “seize control of the state”—were roundly condemned by the EU.  So much so that Erdogan felt compelled to respond, telling the EU to “mind its own business.”

With this background, it’s not surprising that Erdogan has now had a Dutch journalist arrested for an anti-Erdogan tweet (or series of tweets).

A Dutch journalist was arrested early Sunday at her home in Turkey for tweets deemed critical of Turkish President Recep Tayyip Erdogan, according to her Twitter account.

“Police at the door. No joke,” wrote Ebru Umar, a well-known atheist and feminist journalist of Turkish origin.

Umar recently wrote a piece critical of Erdogan for the Dutch daily Metro, extracts of which she then tweeted, leading to her arrest.

“I’m not free, we’re going to the hospital” for a medical examination before being taken to face prosecutors, she said in a second tweet as she left her home in Kusadasi, a resort town in western Turkey.

The column that brought her to the Turkish authorities’ attention was written in response to an email sent by the Turkish consulate to Turkish organizations in the Netherlands urging them to report any criticism of Erdogan.

The Times of Israel continues:

A political storm erupted this week over reports that an email sent by the Turkish consulate to Turkish organizations in the Netherlands asked people to forward emails and social media posts which insult Erdogan or Turkey.

In her column last week, Umar compared the email sent out by the Turkish consulate to “NSB practices,” a reference to the Dutch branch of the Nazi party before and during World War II.

Dutch Prime Minister Mark Rutte said he would ask Ankara to clarify the email call, saying it was not clear what the Turkish government aimed to achieve.

The Turkish consulate for its part said the note was sent by a consular official who used an “unfortunate choice of words” that was misinterpreted.

In an apparent effort to encourage Turkey to take back some of the refugees flooding Germany, the German government had earlier given the go ahead to prosecute a German comedian, Jan Boehmermann, for making fun of Erdogan in Germany.

Germany and the Netherlands both have ” old lese-majeste laws against insulting the head of a friendly state,” and while “both governments have said they will change their laws so that lese-majeste is no longer an offence,” they have not yet done so.  A failure to act that has empowered Erdogan to stifle dissent against him not only in Turkey but to influence Germany and the Netherlands to stifle anti-Erdogan speech.

Is this what we have to look forward to with Thin skinned T-Rump, if he becomes Dick-tator here ?

so Erdogan is kinda Turkey’s T-rump.

Your brilliant insights are scary, you know that?!

Thank you Erdogan for vindicating the US Constitution and Bill of Rights. You and your kind (present and future) will always be proof of our Founding Father’s uncanny insight and justifiable fear of history’s successive tyrants.

Our current Erdogan wanna-be wants to prosecute for not bowing to the alter of global warming/climate change/cooling/wierding/etc. We are getting there ourselves.

Turkey was modernizing and on the verge of integrating with Europe when Erdogan and his islamist nuts took over. As they have consolidated power, Turkey has regressed.

The tradition solution would have been for the military to step in, depose him for a period until new elections could be organized, but one of his first actions was purging the military and intelligence services of those not personally loyal to him. They were replaced by fanatics.

Appeasing Erdogan by tossing him the occasional journalist or comedian cannot help.

That’s one of the reason why I call Obama an Erdogan wanna-be cause he (Obama) began almost immediately by purging our military of strong leaders.

Actually, Erdogan is a great reason why Turkey shouldn’t be in the EU at all.