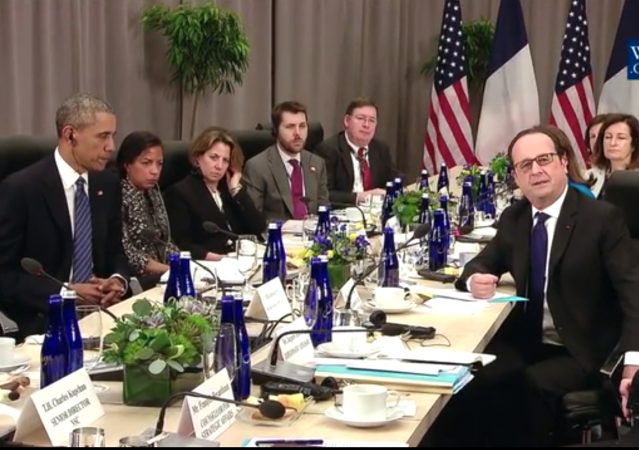 But has the White House taken the terrorism white washing a step further?

MRCTV reported that a video posted by the White House appears to edit out “Islamist Terrorism” from a recent speech given by French President Francois Hollande. While the words are in the speech transcript, they’ve been noticeably scrubbed from the video.

According to the official White House transcript of Hollande’s remarks, Hollande refers to “Islamist terrorism.” The audio of the bold text in brackets is missing from the video – the only point in the video were the audio is absent:

“We are also making sure that between Europe and the United States there can be a very high level coordination.

From the White House transcript:

Who we gonna believe, Obama or our own lying ears?

That’s not fair! But, it is normal for Obama.

I think we are getting into Shakespeare country here. You know the line where he says “Thou doth protest too much”.To go to this extreme shows that this is an obsession with obama. The man is bordering on looney.

Bordering? In a just society, he would be locked up for his multiple psychological disorders, not the least of which is his refusal to see the world as it is.

The issue is if the terrorists can be classified as a diversity class on the basis of commonly held Islamic principles. Mr. Pro-choice or Selective principles in Chief doesn’t believe in that particular class diversity grouping.

It’s a progressive slope that every civilization, eventually, inevitably, seems to follow.

Gee..who would have thought that this administration would ever do such a thing? Golly. I am so shocked!

Let’s face it- the whole thing never really happened at all, any of it.

Somebody please tell Obama that it’s ok to mention Islamist terrorism. When it’s finally showing up in the Arab press, the US can surely acknowledge it.

Arab Press: We Muslims Curse Europeans as Racists, Then Blow Up Airports
http://www.breitbart.com/big-journalism/2016/03/31/arab-press-muslims-curse-europeans-as-racists-then-we-blow-up-airports-and-trains/

“In the wake of the Brussels attacks, the Arab press has been awash with explosive articles acknowledging the Muslim world’s responsibility for global terror. ”

“The views expressed by writers from Kuwait to Jordan to Saudi Arabia represent a brutal reckoning with the Arab and Islamic world’s failure to create a single normal country, to accept the fact that all terrorists are Muslim, and its insistence that terror is simply the result of Western racism, colonialism, and marginalization. “

I would like to have believed this was an April Fool’s gag..but sadly, the fools in the White House thought that altering to public record would go unnoticed.

Yes, it was a issue technical. The technical term is lie by omission.

I understand their motivation, but the execution is so clumsy as to totally defeat the effort. If they’d simply let the unacceptable (to them) term pass, nobody would have said a word. Now the censorship is on everyone’s radar.

Show us on the doll where the bad man hurt you when he said Islamic Terrorist.