de Blasio: The Other NY Democrat Under FBI Investigation

de Blasio: The Other NY Democrat Under FBI Investigation

NYC mayor claims he knows nothing about it. 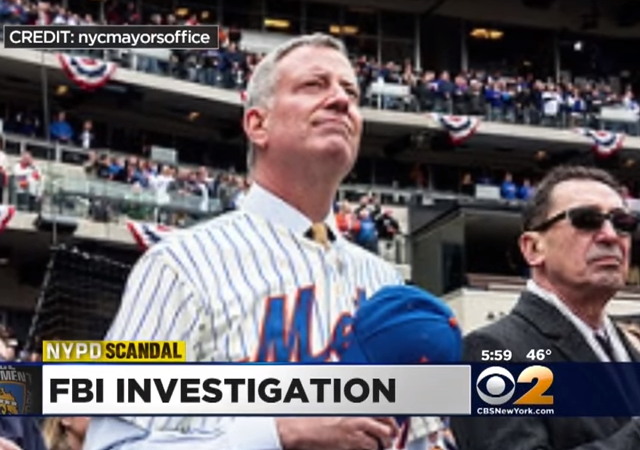 Hillary Clinton no longer has to feel singled out for being investigated by the FBI. She is now joined by New York City mayor Bill de Blasio.

New York City Mayor Bill de Blasio defended his fundraising activities on Sunday after reports surfaced about a federal investigation into the matter, and said neither he nor his aides have been contacted by investigators.

“Everything we’ve done is appropriate and carefully done with many, many lawyers, I assure you,” Mr. de Blasio said during an interview on NBC.

A federal corruption investigation examining police officials, a correction-union leader and businessmen with fundraising ties to Mr. de Blasio, a Democrat, has expanded into a probe of the mayor’s campaign fundraising, people familiar with the matter said.

The U.S. attorney’s office in Manhattan is scrutinizing the activities of two businessmen who are a focus of a federal probe into the New York Police Department and who served on the mayor’s inaugural committee, the people said. One of the businessmen held a fundraiser at his home for the Campaign for One New York, a nonprofit supporting the mayor’s agenda and run by his allies, and another bundled more than $40,000 in contributions to Mr. de Blasio’s 2013 campaign, records show.

Here’s a video reports from CBS News in New York:

Is anyone surprised de Blasio is saying he knows nothing about this? The New York Post:

An incredulous Mayor de Blasio said Sunday he has “no information about an investigation happening” — just two days after The Post and other reported the feds are probing his fundraising efforts.

“I haven’t heard anything about any investigation,” he told Chuck Todd on Meet the Press. “There haven’t been any questions posed to me or my team.”

De Blasio’s Sunday public schedule listed him as appearing on the show to “discuss the upcoming New York primary” between Hillary Clinton and Bernie Sanders, but Todd still peppered him with questions about the widening probe into police accepting gifts in exchange for favors to two shady businessmen, Jona Rechnitz and Jeremy Reichberg, both of whom raised money for Hizzoner.

Who will be next?

Corruption? A liberal Democrat? There must be some mistake. de Blasio’s “I know nothing” is certainly good enough for me!

A politician himself does not have to be corrupt, in order to have very bad things swirling around him. Politicians attract corrupt people looking for money in the same way that entertainers attract people who want to sell them drugs. In each case, there is a pot of money, which the unscrupulous would like to drain.

Mayor Bill de Blasio does not himself have to be corrupt, in order for disastrous levels of corruption to harm his city: all he has to be is lacking in the right kind of vigilance.

I believe the same is likely to be true of the current President of the United States. In today’s San Diego Union Tribune, Obama swears up and down that there is no interference from his office in the FBI investigation of Hillary Clinton, and he also states very clearly what conclusion he expects from the FBI. This man either has no idea how authority works, or he is deeply corrupt. He has done this kind of thing repeatedly while in high office. Meanwhile, his staffers think nothing of violating the chain of command to pester military officers doing actual defense tasks.

Ironic, maybe Clinton”s will support this indictment so Chelsea can run for mayor. Something to do while Mom is in prison?

Hillary commented that it is just a security review .