Is that the ticket? 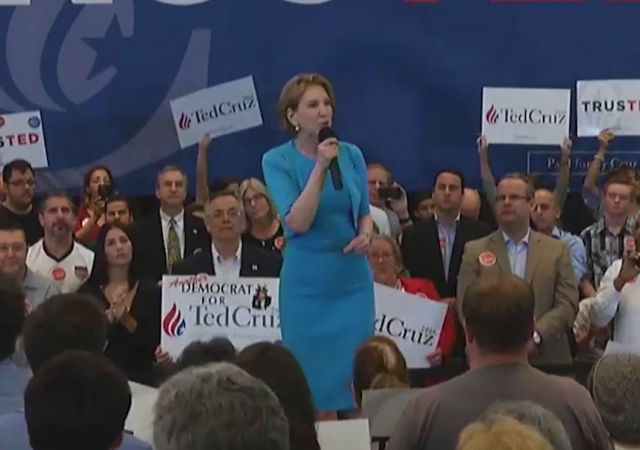 Ted Cruz has a major announcement at 4 p.m. today. We will turn a video feed live at that time.

Reports are emerging that he will announce that Carly Fiorina will be his running mate:

Texas Sen. Ted Cruz will announce on Wednesday afternoon that former presidential rival Carly Fiorina has agreed to be his running mate should he win the GOP presidential nomination.

Sources confirmed to WMUR political director Josh McElveen and political reporter John DiStaso that Fiorina, who has been a supporter of Cruz for several weeks, will be the focus of the announcement that Cruz intends to make in Indiana Wednesday afternoon….

Should Cruz survive Indiana, California’s primary is key on June 7. Fiorina is viewed as a potential asset to Cruz in California, where she won a U.S. Senate primary in 2010 before losing to Democratic Sen. Barbara Boxer in the general election.

This would be a viable pick for Cruz. Fiorina proved effective at hitting both Trump and Hillary.

She never was able to turn those performances into electoral gain, but she would help in California.

We will updates as more in known.

Expect Fiorina immediately to start going after Trump. Will Trump take the bait? Will be hard for him to resist more derogatory comments about Fiorina’s face. Poking the bear would be the strategy.

I hear they are calling it The Moot Point ticket.

Cruz needed someone to tell him he had been FIRED. LOL

Desperation day in the Cruz campaign.

Fiorina was destroyed in California and is an known GOP establishment tool. Former employee of the RNC and rated by many as one of the worst CEO’s in the history of the universe.

Yes, it’s a bit gimmicky. Also, Carly would not bring CA along with her in the general. Finally, she would be demonized by the MSM (she “laid off people!”).
That said, the Cruz campaign can only play with the cards they’ve been dealt. It’s a reasonable move and Carly is a wonderful kick-tush leader Repubs can be proud of.
Realistically, it’s over. Trump will come up a bit short, then win on the first ballot by successfully courting 4 or 5 dozen uncommitteds.

Unlikely, simply from the delegate math.

If Cruz wins Indiana, Trump has to hit something like 75 percent of the California Congressional districts, and his polling is weak outside of the City centers. Most of the other remaining states are favorable Cruz territory.

The uncommitted delegates are largely people who can do math and are intelligent enough to read the writing on the wall regarding any choice that THEY make to play kingmaker, because they know if they choose Trump, and drag him over the finish line on the first ballot, and then he gets trounced in the General Election, ALL the wrath will come down on their heads.

Trump was expected to win NY and the North-East states. There’s no way in HELL that he carries them in a general election. NYC voters instinctively pull the (D) lever. The “New York Values” comment was right on the money, and it will show IF Trump becomes the nominee and he loses New York, where he built his empire.

Chuck, you are wasting your breath. Trump’s people simply see nothing but rainbows and unicorns. They haven’t spent one minute looking at his record of views and donations to the pols from hell. Oh well!

Plus trump got 42 unpledged Penn delegates last night (people who signed a paper saying they would either support Trump or the district winner).

Her problem is not that she laid off people, but that she destroyed an iconic American tech company. Yes, they are still selling printers, but all their technical leadership is gone.

It’s as if Apple sold its OS and started making generic Android phones.

It’s a fair argument, but there’re points to be made on both sides. I personally don’t blame her for destroying HP. The bulk of the blame lies elsewhere (IMO).
The point is, it will be simple for the unprincipled and partisan media to demonize her.

The bulk of the blame lies elsewhere

The big deal about Hurricane Fiorina’s path of destruction is that for HP, she was a self-inflicted wound. And a horribly overpaid one, at that.

This “pre-retrospective” on the campaigns of Cruz and Trump by a pro-Cruz guy is worth a look. Pretty dispassionate and attempts to avoid personal biases.

It has little to do with desperation. Cruz and the anybody-but-Trumps are playing the long game. The whole long game. It’s still a bit early to be measuring Trump for his crown and scepter.

I understand your point but this keeps Cruz from gaining key support at the convention by trading the VP spot.

…and Trump announces is other self as his VP pick.

Trump’s other self has a face only a Trump could love.

Trump has a face only Trump can love.

Did Cruz pick Fiorina like a bride picks bridesmaids, none better looking? I think Carly will be able to goad The Donald into saying dumb and dumber things. The problem is that too many of his followers won’t realize how dumb his comments are. Until it is too late. Damn.

Which comes first?
What did you think was going to happen?

I think Trump supporters are just hoping Hillary will give him a cabinet position.

possibly Sara ?
watched fox last night and they
said something.
Trump needs a female to shore up the female vote
and (B) Trump ALWAYS tries to upstage any male
on the stage with him .. no matter what the venue.
politics, business what ever …

Palin? Say it isn’t so. I think the liberal media hit her unfairly in 2008. With that said, she’s been a trainwreck ever since (reality show on TLC…). Let’s hope she stays wherever it is she lives now.

Oh, my! More Cruz strategy and tactics and hard work and you know, stuff. Does Trump even know where Indiana is? Somewhere left of New Jersey and not quite to California? Now he’s going to have to go get his loafers dusty pandering to the cornfield pissants in Kokomo.

Fiorina? She’s a great foil against Hillary, but I don’t think she’ll be much of an asset in uber-leftist California, despite her ties to that state.

She’s a great speaker, and will be a wonderful asset in getting the Cruz message out.

She also has solid foreign policy chops, and has worked with some of the top intelligence people fighting the jihadists.

And with Fiorina’s tech savvy background she’ll be good at cyber-warfare.

Her dad was my tax prof in law school.
I hope she is at this Saturday’s evening event in Santa Barbara County, but she may deploy to Indiana instead.
I love her substantive attacks on Hillary.

So two losers equals one winner?

Tell your Trump to debate Ted Cruz or Carly. Let’s see who the loser is.

Doubt this will help Cruz at all, but she has more experience actually serving as an executive.

Not to mention that her influence is California is extremely debatable.

If this is true, one can question Cruz’s judgment even more, to select someone that was thoroughly rejected by voters and, for all her success, has not shown herself capable to assume the reigns of power as president.

I was never a Carly fan; that is until she endorsed Cruz. She said that she voted for Cruz and was “horrified” at the prospect of Trump becoming president. She took the words right out of my mouth. Since her endorsement, she’s been campaigning for him and, I believe, went to Maine in his place recently. She speaks fluently and intelligently. Cruz seems to be very comfortable around strong women so I think they’d work well together. I have no fear that this could end up like Palin because there’s a world of difference between the two. The left will give it their darnedest though. As a Cruz supporter, I think he made a smart move. And this is anything but over, much to the dismay of many.

So the fact that she is a good talker makes her qualified? That, to me, is not a good criterion to be president.

It really does not matter to me. I don’t think this will help him one whit, in California or elsewhere.

The problem for Cruz is Cruz, and rather than moving forward, it seems he has reversed his path.

Trump’s primary draw is his ability to babble bullshit and folks love it whether he’s actually coherent or not. Nobody knows what’s beneath the showmanship veneer, so yeah, apparently being a good talker is really important this election cycle.

This would be sort of like a bus crashing through the guardrail and heading toward the edge of a cliff … and still stopping to pick up passengers on the way.

On the other hand, it would be a good way for Ted to get in the news and smother, even if only slightly, headlines about last night’s disaster. In which case, it would mean nothing real, it would just be newsmanship.

If it is announcing Fiorina on the ticket the timing is strange considering the VP “bait” could have been used in the second ballot scenario. I guess Ted won’t be courting Kaisch or Rubio for the VP slot? I don’t think it will be the Fiornia announcement since he would have to give up future convention options. If it is announcing Fiornia then he has concluded it is over…

Right, if there is no second ballot the point is moot. This a a last gasp to try to keep Trump from winning on the first ballot, assuming Fiorina is a good draw in CA.

Cruz abandons all “anti-establishment” pretense and picks an Establishment Amnesty Shill as a running mate.

At least it wasn’t Jeb Bush or Lyndsey Graham.

Numbers USA give Trump and Cruz an A-. Fiorina gets a D. Way to give in to the Chamber, Ted.

Der Donald reminded us all just last week the HE PLANS amnesty.

Cruz will enforce the laws using the existing organizations and personnel, and he WILL NOT amnesty illegals deported according to law.

Carly Fiorinia did better than she was supposed to do in the debates so the pick is understandable. But i don’t really know if she’ll bring in any extra votes. I know that her business legacy isn’t all that great, although personally I think HP had plenty of problems of its own before she showed up.

Trump just tweeted out video of Carly saying Cruz was a politician who would say anything to get elected.

She knows a lying scumbag when she sees one I guess.

She must have some really ugly dirt on Lyin’ Ted for this to have happened… or maybe Cruz is just brain damaged.

More likely much more behind the scenes going on here than we will know until the history of this election is written. Carly and Ted seem to have had a special relationship for some time now, including when they were supposedly “competing” for the nomination. The Cruz campaign is “slow walking” the FEC inquiry into this unusual behavior.

Is the second part of the payoff after all the money his PAC gave her?