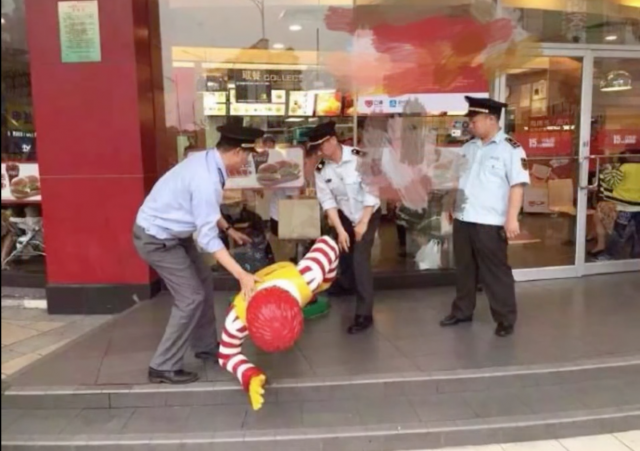 In Guangzhou, China, police “arrested” a statue of Ronald McDonald, the fast food chain’s iconic clown. Evidently, Ronald had to be removed from his perch when restaurant owners failed to remove the “obstruction.”

According to Rocket News 24:

Police in Guangzhou, China, were seen “arresting” a life-size Ronald McDonald statue earlier this week after the fast food restaurant reportedly ignored instructions to remove it from in front of their store.

Despite being told that the clown was causing an obstruction, the restaurant left Ronald in place, resulting in three uniformed men coming to haul him away in scene that was so farcical, net users began sharing photos of the incident in their thousands.

After police removed ol’ Ronald, nothing remained but his empty shoes: 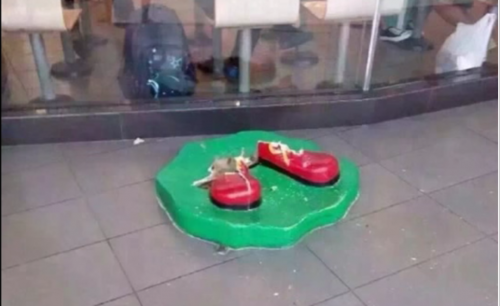 Obstruction or conspiracy? If Ronald had to go, why not the goat? Huh?! HUH?!

While we’re sure there are plenty of readers out there who will be relieved to hear that there’s now one fewer creepy clowns on the streets, a customer who witnessed the arrest told reporters that they thought there was something fishy about the while incident, saying: “If [Ronald] was causing an obstruction here, then why aren’t they taking away the Pleasant Goat statue from across the street?”

The plot thickens… or maybe not.

Nothing says “freedom” like the forcible arrest of a business’ plastic standup logo-character.

Followed by the chorus chanting “This is what obesity looks like!”

He left some big shoes to fill.

They used the wrong song on the video.

They should have used “Send in the Clowns.”

Ronald must have been resisting arrest thus the loss of his feet. Must have been tough to get the handcuffs on. The Chinese media said that Ronald refused to talk to police during interrogation. If Ronald talks to his cellmate (is it BigBoy?), maybe he will spill the fries on Ronald to the authorities.

Which ones were the clown? [/sarc]