Expert: Zika is “a bit scarier than we initially thought.” 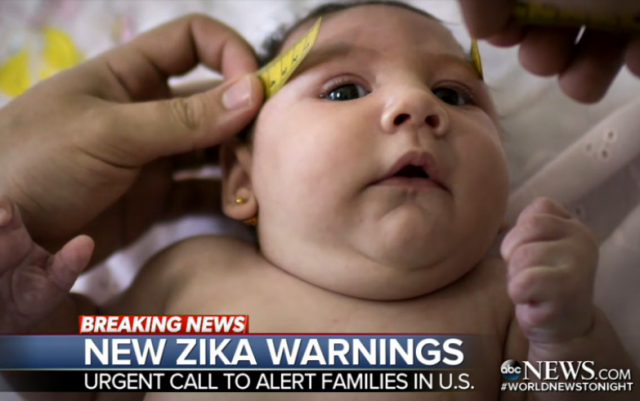 A new a new report from the U.S. Centers for Disease Control and Prevention confirms that the Zika virus can cause a rare birth defect called microcephaly, as well as other brain and neurological effcts.

Health officials across the globe have suspected for months a link between the virus and the birth defect, characterized by an abnormally small head and brain. Officials said today the evidence is overwhelming that exposure to virus in utero causes the birth defect.

CDC Director Dr. Tom Frieden called the news a “turning point” in a fight against the virus that has continued to spread throughout the Americas.

“It is now clear that the virus causes microcephaly,” Frieden said. “We’ve now confirmed what mounting evidence has suggested, affirming our early guidance to pregnant women and their partners to take steps to avoid Zika infection and to health care professionals who are talking to patients every day. We are working to do everything possible to protect the American public.”

I noted in an earlier report that local researchers indicated there was very limited data on the virus and the effects, and the process of handling laboratory samples would be re-evaluated in June. In terms of human infections, a glimpse of the continuing outbreak in Brazil reveals that the effects are not confined to the unborn:

Maria Lucia Brito Ferreira, a doctor at Restoration Hospital in Recife, Brazil, wrote in an abstract to be presented at the American Academy of Neurology’s annual meeting this week and next that two of the patients experienced swelling of the brain and spinal cord that involved the myelin, or coating, around nerve fibers. They were diagnosed as having acute disseminated encephalomyelitis, or ADEM, which is so similar to multiple sclerosis that many practitioners have trouble distinguishing between the two.

The condition is a brief but intense attack that often follows viral or bacterial infections. The U.S. National Institute of Neurological Disorders and Stroke characterizes the long-term prognosis after ADEM as “generally favorable.” However, some patients may have mild to moderate impairment, including cognitive difficulties or vision loss, for the rest of their lives. In rare cases, the condition can be fatal.

In one of the first formal studies focused on how Zika attacks, a team from the Federal University of Rio de Janeiro took human neural stem cells and infected them with virus taken from a local patients. Neural stem cells are critically important in embryonic brain formation.

The outcome, published in Science, demonstrates a massive die-off of the exposed stem cells, as well as greatly diminished growth for tissue used as part of a second experiment. The team concluded that it appears Zika “targets” human brain cells

“Most of what we’ve learned is not reassuring,” said Dr. Anne Schuchat, the principal deputy director of the Centers for Disease Control and Prevention. “Everything we look at with this virus seems to be a bit scarier than we initially thought.”

Wisely, the House of Representatives is offering a free-market based approach to finding solutions to this developing health crisis, by overwhelmingly approving a bill that offers incentives to companies seeking cures for the Zika virus.