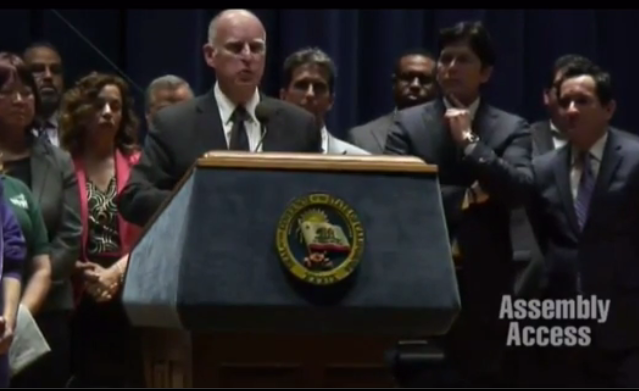 About a week ago, I noted that California lawmakers and public employee unions cut a deal to avoid a ballot battle over a $15/hour minimum wage within the state.

Gov. Jerry Brown, casting a living wage as a moral imperative while questioning its economic rationale, signed legislation Monday raising California’s mandatory minimum to $15 an hour by 2022, acting within hours of a similar bill signing in New York.

The bill’s enactment comes one week after Brown, Democratic lawmakers and labor leaders announced an agreement on the wage increase, averting a brawl on the November ballot.

In adopting the measure, California joined New York as the first states in the nation to enact a plan to raise their statewide minimums to $15. New York Gov. Andrew Cuomo signed his state’s legislation and was cheered by labor unions at a rally moments before Brown spoke in California.

Brown initially showed some reluctance in agreeing to the wage hike. The negotiated compromise Brown offered lawmakers includes a provision allowing the governor to postpone a wage increase in the event of an economic downturn.

However, in his signing statement, Brown shows that in this state, economic justice trumps economic reason:

Economically, minimum wages may not make sense. But morally, socially, and politically they make every sense because it binds the community together to make sure parents can take care of their kids.

In fact, the new bill is probably one of the most economically unjust pieces of legislation ever to cross any governor’s desk! Why? Forbes contributor and former California candidate for the US Senate in California, Chuck DeVore, explains that the wage requirements will destroy one-third of the Golden State.

Regional price differences are one very large factor undermining the wisdom of using central planning to direct the economy. An entry-level worker in Bakersfield likely won’t produce about 70% more value than his counterpart in San Francisco, yet, the cost-of-living adjusted hourly wage assumes just that, demanding that relatively low-cost inland areas pay the same for their labor as the high-cost coast.

…California small businesses, already under siege by a complex web of state and local rules that set them back about $134,000 per year in compliance costs, will now see the price of entry-level labor rise 50% without a corresponding increase in productivity to pay for the greater costs. Some small businesses will adapt by spending more to automate while hiring workers with greater skills. But, for many others, $15-an-hour will be the final California barrier to small business that drove them out of state or simply forced them to close their doors.

But, hey, union workers are happy!

They may not remain that way for long. Over 9,000 businesses have left California in the past 7 years.

Additionally, automation is becoming a popular option. Given the high cost of living in San Fransisco and Los Angeles, little wonder that one of the fastest growing eateries in those cities is fully automated.

And to conclude with a final bit of rich irony, the biggest beneficiary of the new minimum wage laws may not actually be “working poor”….but the Silicon Valley moguls who have driven-up the cost of living by supporting progressive policies and politicians.

The state’s new minimum wage law, signed into law Monday by Gov. Jerry Brown, is expected to give a boost to Silicon Valley’s burgeoning robot and automation industry as businesses seek to replace increasingly expensive workers.

With wages rising and technology advancing and becoming cheaper, agriculture, restaurants and hotels are expected to turn more to automation. It’s an unintended consequence of a law designed to improve the lives of lower-paid workers struggling in pricey California.

“The higher the compensation, the greater the incentive to replace labor with capital. The other thing to figure in here is the declining cost of automation,” said Mark Muro, a senior fellow at the Brookings Institution, a Washington, D.C., think tank.

So, we may not get true economic justice…. but at least we Californians have surf and sunshine to enjoy during our FUNemployment!

I used to be proud of being a native Californian. Now I thank God I live in Texas.

Nobody could pay me to live in Kuhlifornia again.

Count me as another former resident of the (Tarnished) Golden State. We took our assets and ran five years ago.

“Economically, minimum wages may not make sense. But morally, socially, and politically they make every sense because it binds the community together to make sure parents can take care of their kids.”

You cannot fix stupid. And you cannot help people who select magic thinking.

Whenever a politician tells you “it’s for the kids”, grab your wallet, because you’re being had.

Posted from NC, home to the NC Education Lottery, a name derived to sell the idea of a state lottery, the profits from which would go to education “for the kids”. How much actually goes to education? Less than 30%. The lottery, a tax on people with poor math skills.

Neal Boortz always referred to it as “A tax on the stupid”.

The first comment on that article nailed it. This isn’t about “the poor”. This is about more money for government. The biggest winner is the fed with the increase in FICA collected. The biggest losers are young people. What employer in their right mind is going to pay $17.00+ per hour for a teenager to sweep the floor and wipe tables?

Meanwhile, the proles are still stuck on stupid, thinking that Uncle Sam and the union thugs just love them so much that they’re “fighting for the little guy” ~

Not sure how Brown’s statement is all that surprising. It is certainly true of the left, but occasionally true of the right: You point to the few helped by a law to discount the harm done to others. A law that put extra money in one guy’s pocket is worth it to the left. The harm done to others in this case may be a benefit as it gives the state more opportunity to “support” and “provide” through benefits and entitlements. It may create some negative sound bites, but in the long run it is exactly what the professional elected class wants – a way to make the state even more needed in some people’s lives.

You don’t always get all of the control you want in one stroke of the pen. Obamacare is exhibit 1. But as long as you maintain power, as certainly Democrats will in CA, you can get where you want to be bill by bill by bill. That way fewer people notice how bad the end game is.

When I was in college in the mid-eighties in Louisiana I used to work weekends at a grocery store. I remember there was a guy that stocked shelves at night who loved Elvis and did his best to look like him. Well, as much as a guy can in a Winn Dixie uniform stocking shelves on the night shift. He had two important real world pieces of wisdom that he insisted I would never learn at college that he wanted to make sure I understood.

The first was that every self-respecting man should own a tuxedo. In his mind you weren’t even a real man if you rented one. Second, was that a democracy could only last 250-300 years because that was how long it took for “the people” to have enough unsustainable entitlement programs in place that would bankrupt the society both morally and financially.

I actually did think he looked at lot like Elvis. The hair and the comb in his back pocket were perfect! I also thought he was full of crap on both his points. However, today I often find myself thinking about trying to track that guy down and see if he has any more nuggets of wisdom he would like to pass along!

PS I know this country is a republic, so when you point that out to me I’ll just tell you the same thing he told me. “Shut up college boy, you know what I mean!”

You still haven’t figured it out… that WAS Elvis.

Well, ONE of them…

Not all of them have gone home, either.

Again, Neal Boortz was fond of pointing out that the average lifespan of a free republic was right at 200 years.

“The negotiated compromise Brown offered lawmakers includes a provision allowing the governor to postpone a wage increase in the event of an economic downturn.”

Regarding the notion of any Governor having the balls to say, “sorry kids, I’m canceling your raises this year because Sacramento can’t manage its budget again’, that’ll happen right after hell hosts the Winter Olympics.

Once the chains get their robot systems working in California in response to this how long before such systems are rolled out nationwide?

Or regulated out of existence. Innovation is wonderful, but it cannot be allowed to interfere with wealth distribution schemes, which is exactly what the $15 minimum wage is.

How about a minimum wage equal to the square root of negative pi divided by zero? It obviously wouldn’t make sense mathematically, but what about socially, morally, and politically?

Two and one half hours later and I’m still working out the math.

Since economics don’t matter to Gov. Moonbeam, I don’t know why he stopped at $15 – you should’ve just said $100 an hour!

The state should just transfer this additional money from the pay and benefits of the highest paid government workers. THAT’S the moral thing to do.