Branco Cartoon – From Russia With Love

Branco Cartoon – From Russia With Love 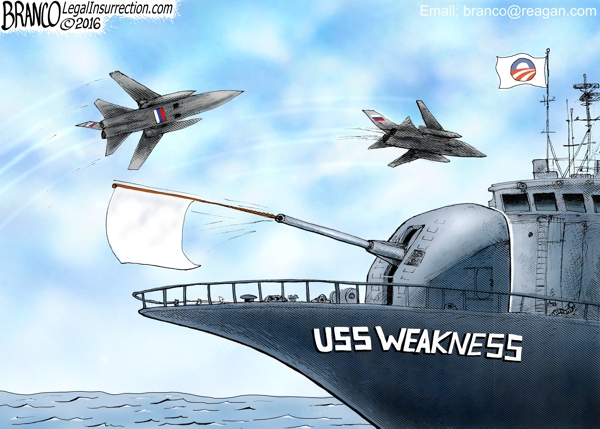 Meh! This is something we both did regularly during the Cold War. We poke them and see what they do. They poke us and see what we do. If we do something, that reveals something about our capabilities that they may not have known. The best course of action is to do nothing, and thus reveal nothing. So having a poltroon in the White House may have worked out OK for us this time.

One wiseguy suggested filling our chaff launchers with glitter and glue, and launching the stuff into their path. 😉

Yep. If that destroyer didn’t know about those jets shortly after they took off, someone is doing it wrong.

Every gun and defensive missile on that ship should have been in “quiet mode”. No sense in giving them intel. If the captain had any reason to kill those jets, it would have been done out past the horizon.

Meh! This is something we both did regularly during the Cold War.

30 yards off the bow and below the level of the bridge? As trigger-happy as the Soviets were in those days? I’d like a citation for that, please.

Ya, me too. I don’t recall reports quite like this. Maybe they went unreported…

The main thing to remember is that it was just a stupid stunt that the Captain of the ship clearly realized.

Regardless of what the media says, this never presented itself as flying an “Attack Profile”.

You sink ships with big missiles which you launch from 30+ miles away, not by flying directly towards & over/near the ship, that’s just a quick way to die.

The only reason to fly closer than a couple of miles of a ship in combat is if you only had bombs, which these fighters did not (despite clueless commentators saying otherwise).

The response from the locals was rational and predictable, and has historical precedence.

WASHINGTON — A Chinese fighter jet flew within 30 feet of a Navy surveillance and reconnaissance plane this week in international airspace just off the Chinese coast, the Pentagon said Friday.
—————-
http://www.cnn.com/2001/US/04/01/us.china.plane/index.html?_s=PM:US

“U.S. surveillance plane lands in China after collision with fighter”