A wee bit problematic when you factor in his campaign rhetoric 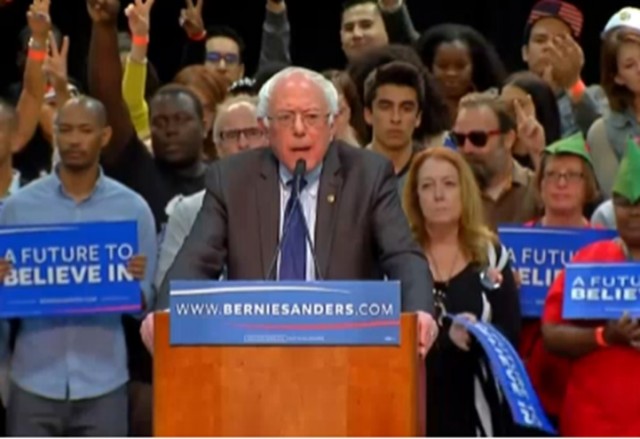 Bernie Sanders enjoys chatting at length about soaking the rich and fair shares and all that other socialist rhetorical fluff.

But the presidential candidate who has never held a non-government job enjoys tax breaks and deductions like the rest of us. There’s just a little bit of a problem though — those same deductions would be prohibited under Sanders’ own tax plan.

Jim Geraghty of National Review has the breakdown:

Bernie Sanders released his 2014 tax return this weekend, revealing that he and his wife took $60,208 in deductions from their taxable income. These deductions are all perfectly legal and permitted under the U.S. tax code, but they present a morally inconvenient, if delicious, irony: The Democratic socialist from Vermont, a man who rages against high earners paying a lower effective tax rate than blue-collar workers, saved himself thousands using many of the tricks that would be banned under his own tax plan.

With all of his itemized deductions, Sanders’s taxable income was significantly lower than it would have been if he had taken the standard deduction. The deductions left Sanders and his wife paying $27,653 in federal income taxes in 2014, on a joint income of $205,271 — an effective federal tax rate of 13.5 percent. If that seems low to you, your instincts are right: According to the Tax Foundation, the average federal income-tax rate for a couple making $200,000 to $500,000 in 2014 was 15.2 percent. The “millionaires and billionaires” that Sanders is so fond of berating payed, on average, just more than twice as much of their income (27.4 percent) in federal taxes as he did.

On the campaign trail, Sanders’s taxation philosophy is simple: If you can pay more, you should; deductions are not a justifiable reason for a wealthy person to pay a lower effective rate than someone who earns less. His web site declares, “We need a progressive tax system in this country which is based on ability to pay. It is not acceptable that corporate CEOs in this country often enjoy an effective tax rate which is lower than their secretaries.”

With such rhetoric, you might think that Sanders would be reluctant to take every deduction he possibly could. Yet he and his wife took these deductions:

Keep in mind, Bernie Sanders doesn’t really like people itemizing their deductions to keep their taxes low. Under his tax plan, people making more than $250,000 per year — a bit more than he makes as a senator, but less than the $400,000 he would make as president — would have their itemized deductions limited to 28 percent of their income. The Sanders family’s own 2014 deductions amounted to 29.3 percent of their income.

I know you’re just SHOCKED to learn that those who want everyone else to pay more don’t practice what they preach.

And Mitt was reamed for paying 15%.
Won’t matter to the progressives, it’s only the filthy rich repubs who refuse to hand over money that are the crooks.

A quibble: The proposed “flat tax” is a progressive income tax.

The RATE is flat, which would be a YUUUGE difference. Particularly to me. Today I wrote a check to the treasury that would make a gilded toad blush.

By the way, once upon a time Trump proposed a 14% wealth tax on those with 10 million or more. And last August he defended that proposal as being conservative.

He and Bernie are just sides of the same coin.

AS a socialist, he should be ashamed to be earning a combined 205K. Doesn’t Bernie know there are poor people who need his income?

Everyone’s crazy old hippy throwback uncle from Vermont is a communist, not a socialist. And as he must have notic ed when he honeymooned in the USSR the party apparatchiks and nomenklatura get more than “the masses” because they deserve more than the masses. They’re the vanguard of the revolution.

In the Soviet era as you rose through the party ranks you’d get part then all your pay in “certified rubles,” not ordinary rubles. There was nothing to buy with ordinary rubles as the shelves were bare, and ordinary rubles were worthless outside the borders. You could actually exchange certified rubles for real foreign currencies and, even better, shop in special party-members only stores where luxury goods like beluga caviar, fine vodka, Cuban cigars, Western products, or just staples like bread were actually in stock.

Bread lines were for the workers. As was public transportation. Higher ranking members had cars fitting their importance. Ordinary cars, then Soviet luxury cars, finally chauffeured limos like the GAZ Chaika or, when you really made it to the top, a ZIL. And when you had been provided with a ZIL you didn’t have to compete with what Moscow traffic there was; mostly buses and commercial and military vehicles. Because in addition to the limo there were special ZIL lanes where no other vehicles were permitted, and Moscow traffic police would stop all the traffic and wave you through.

As one American congressional commie put it, “the sheep gotta take care of the sheepdog” (as quoted in his former aide’s sexual assault suit when the ol’ commie demanded in true Clintonian fashion her sexual services as a condition of her continued employment).

Then in addition to the luxurious and spacious Moscow apartment, very different then the tiny flats three generations of “workers” shared, there were the vacation villas; the fabled Russian dachas. Where you could determine someone’s status first by size and location, then by number of dachas they had across the USSR.

See, Bernie is a communist; a socialist. Picasso was one as well. When he talked about redistributing other people’s wealth during one of his later interviews, his interviewer looked at Picasso’s evident wealth and wondered how much Picasso gave to help poor and the oppressed he claimed to care about.

Picasso said, “Oh, I don’t mean my money. I’m a socialist, not a Christian.”

A total of $8,350 in gift to charity. People who earn a fraction of what he does are more generous than that.

Typical liberal/socialist/commie — generous with other peoples’ money, but stingy as Scrooge with their own.

I’m no Warren Buffett fan, but I have to concede his point about tax policy: there is no connection between believing taxes or rates should be higher, and taking advantage of every current law to minimize current obligations – an essential right of every citizen, even recognized as such by the Supreme Court.

Sanders is hypocritical in preaching public compassion and increasing welfare benefits while behaving penuriously with his own wealth, and it is quite fair to point it out. But even a socialist is entitled to every deduction and credit the current tax laws allow, and there is nothing wrong with taking them.

Now, if only Trump will release his tax returns . . .

All this means is that somewhere under all that batshit craziness, Bernie actually has a bit of sense.

Or maybe the credit goes to Mrs. Bernie. Or to their tax accountant. It doesn’t matter. Not even a socialist is required to arrange his affairs in such as way as to give the government more than the law requires.

It’s legal for Sanders to structure his affairs to pay as little in taxes as he can but it’s height of hypocrisy for Leninist-Stalinist fossilized relic to yell his head off about immorality and greed when corporations and the “millionaires and billionaires” do the same.

Ergo, not a “nothingburger.”