Austria Cracks Down on Migrants As Far-Right Gains Support

Austria Cracks Down on Migrants As Far-Right Gains Support

They’re even building a wall. 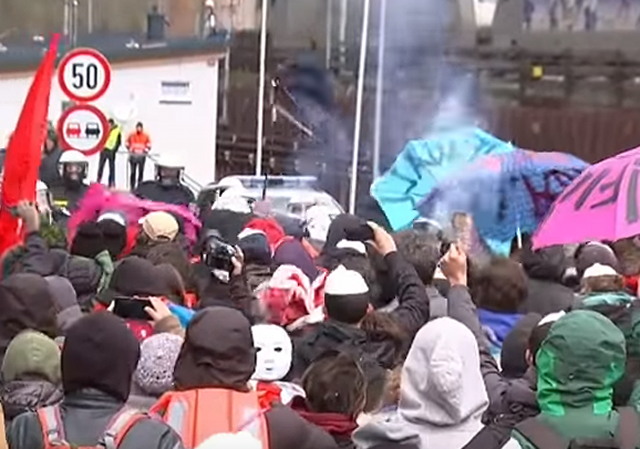 Austria is also in the midst of a presidential election and the subject of the migrant crisis is playing a significant role. The nation’s conservative party is doing very well.

Norbert Hofer has about 36% of the votes for the mostly ceremonial role – not enough to avoid a run-off in May.

He is likely to face Alexander Van der Bellen, an independent contender backed by the Greens, who is polling 20%.

For the first time since World War Two, the candidates from Austria’s two main parties did not make it to the run-off.

Rudolf Hundstorfer from the Social Democrats and the centre-right People’s Party Andreas Khol are each thought to have taken about 11% of the vote.

Both parties have governed Austria for decades – either alone or in coalition.

This is a big shake-up in Austrian politics, the BBC’s Bethany Bell in Vienna reports, as the country has had a president from the centre-left or centre-right since 1945.

The clear victory of the far-right candidate reflects widespread discontent with the status quo, as well as concerns about immigration and the economy, our correspondent says.

Austria has apparently been watching what’s happening in Germany. Their response? No thanks.

More from the BBC:

Austria has passed a controversial new law that restricts the right of asylum and allows most claimants to be rejected directly at the border.

Rights groups say the law undermines the principle of protection from war and persecution.

It comes days after Austria’s far-right came top in the first round of a presidential election.

Austrian officials say they are also considering building a fence at the main border crossing with Italy.

The new asylum law lets the government declare a “state of emergency” over the migrant crisis and reject most asylum-seekers, including those from war-torn countries such as Syria.

Austria is expecting a massive number of migrants in the coming months as the weather gets warmer. It’s rather ironic that they’re building a wall.

Austria outlined plans on Wednesday to erect a fence at a border crossing with Italy that is a vital link between northern and southern Europe, escalating a stand-off between the two states over how to handle a migration crisis.

Migrants are crossing the Mediterranean from Africa to Italy in growing numbers and Austria has said Rome must stop them traveling onwards towards northern Europe or it will have to introduce border controls at the Brenner Pass in the Alps.

But with Austrian preparations for controls already under way, Italian Prime Minister Matteo Renzi said Austria’s move was “shamelessly against European rules, as well as being against history, against logic and against the future”.

Told you nationalism was on the rise. And you thought I just meant America? The collectivist transnationals are fighting a rear-guard action in many places.

Trump is the nice nationalist. If he is robbed wait till you see what comes next.

The consequences of anti-native policies can no longer be ignored, in Austria, Syria, Libya, Iraq, etc. The reactive and “planned” factions will suffer the most.

“The hills are alive with the sound of Islam”